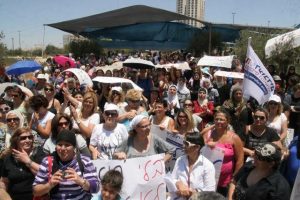 The following statement, drafted by Steve Clark, was released Dec. 11 by Jack Barnes, Socialist Workers Party National Secretary, on behalf of the SWP National Committee. It is being widely circulated by John Studer and Jacob Perasso for the 2018 election campaigns of the SWP for U.S. Senate, state governors and U.S. House of Representatives, as well as for the Young Socialists.

The Dec. 6 decision by President Donald Trump, backed by Democratic Senate Minority Leader Charles Schumer, “to officially recognize Jerusalem as the capital of Israel” and “begin preparation to move the American Embassy” underlines the political necessity for the Israeli and Arab governments and leaderships of Palestinian organizations to begin immediate talks to recognize both Israel and an independent Palestinian state.

Negotiations to reach such an agreement must recognize the right of Jews everywhere to take refuge in Israel in face of the global rise of Jew-hatred and anti-Semitic violence, as well as the unconditional right of the dispossessed Palestinian people to a contiguous, sovereign homeland on territory — including East Jerusalem — conquered and occupied by the Israeli government during the 1967 war.

If such talks are to succeed, there is no question that Palestinian representatives would insist on East Jerusalem as the capital of Palestine. Nor can there be any doubt that the Israeli delegation would need to agree to West Jerusalem as the capital of Israel, renouncing what that country’s rulers have called “undivided Jerusalem” since the 1967 occupation. All those practicing the Islamic, Jewish or Christian faiths must be guaranteed free, secure and dignified access to their holy sites in Jerusalem, including the location Muslims call Haram al-Sharif and Jews and Christians call the Temple Mount.

It is along this road that working people of all national backgrounds, religious beliefs and political allegiances in Israel and Palestine can use and defend their space to speak, organize and begin redressing the blood-drenched legacy of imperialist domination and capitalist exploitation. These historic outrages include ruthless colonial and national oppression across the Arab and Muslim countries, as well as the genocidal crimes of the Holocaust, the murderous pogroms preceding it across Eastern and Central Europe and Russia, and the enduring reality of Jew-hatred in today’s crises-ridden capitalist world.

As an elementary precondition to progress along this course, the Socialist Workers Party demands immediate repeal of the U.S. government’s Jerusalem Embassy Act, which declares that “Jerusalem should remain an undivided city” and that “the United States Embassy in Israel should be established” there. That law was adopted in 1995 with overwhelming Democratic and Republican party majorities — 93-5 in the Senate; 374-37 in the House of Representatives.

When President Trump made his Dec. 6 White House announcement, he was stating what is bipartisan Washington policy and law, reaffirmed as recently as June 2017 by a Senate resolution adopted unanimously. It is a reactionary policy that both the Democratic and Republican parties enshrined in their 2016 presidential platforms, as they’ve done in many election cycles beforehand.

Claims by sections of the bourgeois media that President Trump has now scuttled his pledge to broker “the ultimate deal” between Israel, the Palestinians and Arab governments miss the point. In fact, the White House is putting it to its allied regimes in Saudi Arabia, the Gulf States, Egypt and Jordan, as well as to the bourgeois misleaders of the Palestinian Authority and Hamas, that Washington is “making them an offer they can’t refuse.” By combining the stick of an anticipated U.S. Embassy in Jerusalem with the carrot of greater economic and military aid to Sunni-led governments against their feared rival in Shia-led Tehran — with its so-called Revolutionary Guards and military surrogates extending from Afghanistan to Lebanon — the Trump White House is determined to facilitate talks the next year or two with a different outcome from failed efforts by Democratic and Republican presidents alike since the 1990s.

That’s why, among other things, the Trump administration rejected Minority Leader Schumer’s counsel to refer to Jerusalem as Israel’s “undivided” capital, saying instead that Washington leaves open “the specific boundaries of the Israeli sovereignty in Jerusalem.” With regard to Haram al-Sharif/Temple Mount, the White House called on “all parties to maintain the status quo” — that is, to maintain official Jordanian authority over those religious sites, within the constraints of Israeli police and military power on the ground.

For the second time since his inauguration in January 2017, the president also signed a waiver to the Jerusalem Embassy Act enabling him to postpone moving the U.S. Embassy from Tel Aviv for another six months, as the Clinton, Bush and Obama administrations had done before him twice a year since 1995. And the Trump administration announced no steps to begin transferring embassy operations there anytime soon.

Prospects for sustained and effective struggle led by working people in Palestine or elsewhere in the Middle East against Washington’s policies, and against their own local exploiting classes, are hobbled by political exhaustion in face of decades of setbacks and defeats due to anti-working-class misleadership, whether Stalinist, bourgeois nationalist or Islamist.

In the United States and other imperialist countries, organizations of middle class radicals claiming to be communist or socialist have taken to the streets in opposition to the Trump administration statement. These organizations explicitly disavow any course to advance class solidarity among Palestinian, Jewish and other working people, often raising the reactionary cry, “From the river to the sea, Palestine will be free!” This course to drive Jews out of the region disqualifies such groups from any moral or political legitimacy to speak as what Bolshevik leader V.I. Lenin more than a century ago called “tribune[s] of the people … able to react to every manifestation of tyranny and oppression, no matter where it appears, no matter what stratum or class of the people it affects.”

In opposition to Washington, to bourgeois governments and political organizations across the Middle East, and to the middle class left here in the United States, the Socialist Workers Party has a different starting point: the class interests and solidarity of workers and toiling farmers across the Middle East — be they Palestinian, Jewish, Arab, Kurdish, Turkish, Persian or otherwise, and whatever their religious or other beliefs — as well as working people in the United States and around the world.

We are for whatever helps working people organize and act together to advance our demands and struggles against the capitalist governments and ruling classes that exploit and oppress us and their petty bourgeois political servants and media apologists.

We are for whatever renews our class solidarity and self-confidence, advancing us along a revolutionary course toward a united struggle for workers power.

This is the proletarian internationalist course of action, part of our communist program, that members and supporters of the Socialist Workers Party are discussing with workers as we campaign door to door in their neighborhoods, with co-workers on the job and their friends and family members, and with those we join in protests against Washington’s anti-working-class policies at home and abroad.

This site uses cookies to improve your experience. Learn more.