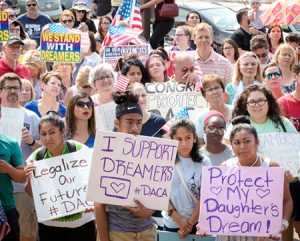 Democratic and some Republican senators on the one side and President Donald Trump on the other are blaming each other for the failure to pass legislation that would block the deportation of thousands of immigrant “dreamers” who came to the U.S. before they were 16.

Meanwhile, the number of immigrants crossing the border is rising again, as bosses seek cheap labor in the midst of an uptick in production.

Last September President Trump announced he was phasing out the Deferred Action for Childhood Arrivals program, created by former President Barack Obama by executive order. Trump said he wants to hang onto the dreamers too, but it has to be done by Congress.

Six bills were introduced but none was able to get the 60 votes needed under current Senate rules to be approved. The bill backed by Trump would grant the deferred status to some 1.8 million youth, far more than the 800,000 applicants approved under Obama’s program.

The bill coupled the reprieve for the dreamers with new restrictions on immigration. It would limit family-based visas to parents and nonadult children; end the immigration lottery, which provides a road to the U.S. for tens of thousands; and authorize billions of dollars to extend the already existing wall on the Mexican border.

A bipartisan Senate bill that also failed would have increased those eligible to be dreamers to some 3.2 million, and without restrictive measures Trump demanded. Backers of this bill knew it didn’t have a chance of passing, much less overcome a presidential veto. Their goal was to score points against Trump, with an eye to the 2018 elections.

Absent from the feigned concern for the dreamers and the rulers’ debate are the rest of the 11 million undocumented workers in the U.S.

Bosses depend on immigrant labor

The propertied rulers have never been out to halt the flow of immigrants, only to regulate it based on their needs. By maintaining a pariah layer of workers — without “proper” papers or with “guest” papers that give them almost no rights — the bosses get cheaper labor, divide the working class and keep wages for everyone down. This is essential for U.S. capital to bolster its competitive drive against rivals abroad.

The liberal press and middle-class left gives the impression that the Trump administration has engineered a huge crackdown on immigrants. And, they claim, Trump’s election represents a growing racist and anti-immigrant wave in the working class.

In January 2017, Obama’s last month in office, 42,463 people without papers were detained trying to get into the country. By April, under Trump, that number had fallen to 15,766, a reflection that fewer workers were trying to cross.

But over the last eight months the number has begun to grow again — a result of the uptick in the capitalist economy. More than 40,000 people were arrested in December.

Immigration and Customs Enforcement agents arrested nearly 106,000 so-called criminal immigrants in 2017 and 38,000 “noncriminals.” This is higher than similar arrests in Obama’s last year in office, but half the number arrested each year during Obama’s first term.

In 2008 the government stopped conducting immigration factory raids, due to their unpopularity among workers, immigrant and native-born alike. In their place ICE stepped up workplace audits, which lead to the firings of thousands of workers without papers. Under Obama, the audits skyrocketed from 503 in 2008 to more than 3,000 in 2013 and 2014. In 2017, after Trump took office, ICE carried out 1,360 audits.

“President Trump has proposed moving toward a [merit-based] system,” he says. “This idea is worth discussing.”

Despite the heated factional rhetoric, this view is shared by most liberals, including many middle-class leaders of groups protesting for the dreamers, who are touted as future professionals with “so much to offer America.”

At least some opponents of deportations are uncomfortable with this meritocratic, anti-working-class view, and with leaders of immigrant rights groups abandoning the fight for amnesty for all undocumented workers.

“There are millions of others that will be left out in the cold under any deal for the dreamers,” Kevin Appleby from the Center for Migration Studies told the National Catholic Reporter Feb. 13. “I am a bit concerned that advocates have not kept talking about the need to bring everyone out of the shadows, not just the dreamers.”