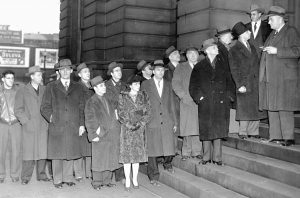 Most of the 18 convicted leaders of the SWP and Minneapolis Teamsters line up on way to prison, December 1943. This was U.S. rulers’ first use of their thought-control Smith Act, adopted as Washington prepared to enter the inter-imperialist Second World War.