About The Militant Newspaper

Since Nov. 15, 1928, the Militant has been “a socialist newsweekly published in the interests of working people,” as its masthead says. It reflects the program, perspectives and activities of the Socialist Workers Party in the United States. 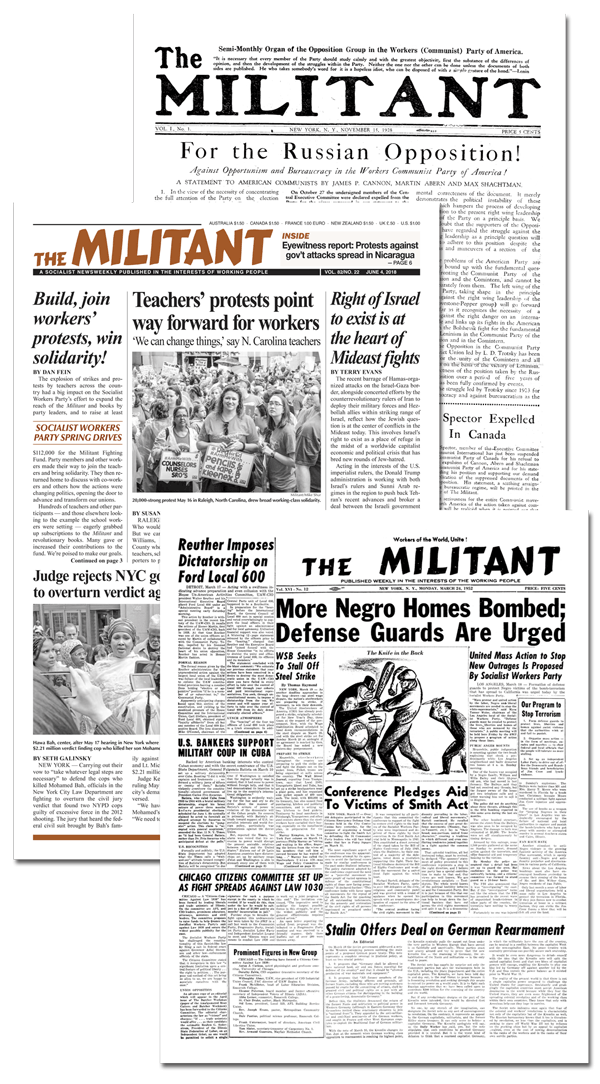 Our starting point is how to strengthen the fighting vanguard of the working class of which we are a part, so it is better armed to understand the world we live in, to learn from the history of the modern working-class movement, to become more conscious of our strength and historic responsibilities, and to chart a line of march toward overthrowing capitalism and taking political power.

The SWP fights for independent working-class political action in opposition to the parties of the bosses — the Democrats and Republicans.

The Militant champions the battles of the labor movement and the fight to organize and unite the working class. It explains and helps advance the struggles of African-Americans, Puerto Ricans, and other oppressed nationalities, of women and immigrants, against discrimination, racism and oppression.

It covers and promotes opposition to Washington’s imperialist wars — from the second imperialist world slaughter out of which the U.S. rulers emerged as the dominant capitalist power worldwide, to their wars in Korea, Vietnam, the Middle East, and today in Syria, Iraq, Afghanistan and elsewhere.

The Militant has a long history in the battle for political and constitutional rights, and against the FBI — the capitalist rulers’ political police — and against frame-ups and the rulers’ criminal “justice” system.

We’re proud of the fact the Militant reaches a growing number of workers behind bars in prisons across the country. And we fight hard to protect their rights to receive the paper in the face of prison censorship.

The Militant is distributed door to door in working-class neighborhoods, on strike picket lines, at political protests and at factories and other workplaces. Members of our sister parties, Communist Leagues, distribute the paper the same way in Australia, Canada, New Zealand, the U.K. and elsewhere. 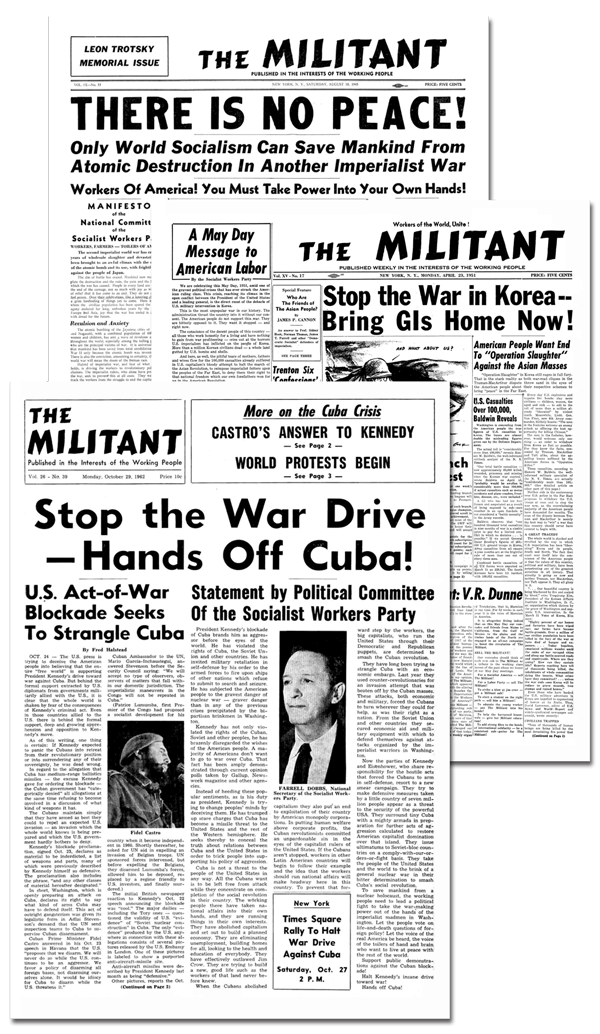 Since it was launched, the Militant has pointed to the lessons to be learned where workers and farmers succeeded in overthrowing capitalist rule and putting working people in power — the two great revolutions of the 20th century, in Russia in 1917 and Cuba in 1959.

It fought the Stalinist counterrevolution in the Soviet Union, while continuing to defend the workers state there against imperialist attack. Decades of being eaten out from within led to the fall of Stalinist regimes in Moscow and across Eastern Europe.

To this day, the Militant champions the living Cuban Revolution, an example for workers everywhere to emulate. The paper was the first place many of the speeches of Fidel Castro and Che Guevara were published in the U.S.

The same is true of talks by Malcolm X, Thomas Sankara, Maurice Bishop, Nelson Mandela, Socialist Workers Party leaders and other revolutionary leaders of our era.

The SWP and the Militant are part of the continuity of revolutionary Marxism — from Marx and Engels, V.I. Lenin and Leon Trotsky, and the lessons of revolutionary struggle through to the Cuban Revolution.

We hope you enjoy reading and using the Militant and ask you to help get it around!