“The working class in this country should have more of a say. We do need a voice,” Marion Franklin, a medical personal care assistant, told Helen Meyers, Socialist Workers Party candidate for U.S. Senate, when she knocked on his door in Shakopee, Minnesota, Sept. 22.

“We need our own party to unify the working class, to defend our class interests,” said Meyers. “The government and the political parties that make it up today represent the capitalists.”

“Yes,” agreed Franklin. “This is how it’s been and I’m afraid it always will be.”

“It is by organizing and fighting that we will wake up to our worth and learn what we are truly capable of,”  SWP member David Rosenfeld said. “We are organizing to build a movement that will overthrow capitalist rule and place the working class in power.”

“Maybe if you start fighting now,” Franklin said, “even if you start small, we will see what it can be in 10 years.” He got Malcolm X, Black Liberation, and the Road to Workers Power and The Clintons’ Anti-Working-Class Record, both by SWP National Secretary Jack Barnes, and a subscription to the Militant.

Meeting working people on their doorsteps in cities, towns and rural areas to discuss political developments and the way forward for the working class and the labor movement is the central weekly activity of the Socialist Workers Party and the Communist Leagues in Australia, Canada, New Zealand and the United Kingdom.

Party members speak out for all those targeted by the capitalist rulers’ attacks.

These discussions offer the best opportunity to share experiences and discuss a way forward in response to historic political developments. The “world order” the U.S. rulers imposed after they emerged victorious from the second imperialist world war is fraying and coming part.

“We need strong unions to fight for safety and against wage and job cuts,” warehouse worker Vanessa Goral told Communist League member Catharina Tirsén when she knocked on her door in Newbury Park in east London Sept. 22. Goral said that she had been working for a big corporation for a year until “being released” recently. The company uses agency workers they can “flexibly hire and fire,” she said. But even though she was a regular company employee, “it made no difference,” she said, because the bosses eliminated her job too.

“We need to build a working-class-led movement of millions to remove the propertied rulers from power and establish a government run by workers and farmers,” said Tirsén. “To do that we have to overcome the divisions the rulers impose on us and forge unity in struggle. Unions that start from the interests of the workers, not from ‘understanding the problems faced by the employers’ is what we need,” she said.

Taking up what is one of the biggest discussions among working people here — anti-Semitism being rife in the opposition Labour Party — Tirsén said, “We have to fight against Jew-hatred and other forms of scapegoating. Big stakes are involved for the working class.”

Goral responded that she knew very well from personal and family experience what Tirsén was talking about. “I was born here, but I come from a Polish Roma family. My family language is Gypsy,” she said. “Scapegoating of Roma people can be very strong.”

“I have two friends on strike at the downtown hotels who will be happy to learn about your campaign for governor,” Dina Pickett, a teacher’s aide, told Dan Fein, SWP candidate for Illinois governor, Sept. 23 at her doorstep in Bellwood, just west of Chicago. “I am glad you came to my house today.”

Thousands of hotel workers in the Chicago area have been on strike demanding hotel owners provide yearlong health care, with some bosses having been forced to concede.

“My own experience is that the school boards have plenty of money for superintendents’ salaries and bonuses,” said Pickett, “and little for the employees and the students.”

“The capitalist system is based on profits. It’s in crisis today and the rulers’ solution is to make the working class pay,” said Fein. “We need to break from the Democrats and Republicans and fight for independent working-class political action, for our own party, to fight to replace the capitalist rulers with a workers and farmers government.”

Pickett got a subscription to the Militant to follow the activities of the SWP.

Campaigning door to door in the Albany area, Margaret Trowe, SWP candidate for U.S. Senate in New York, got into discussions about how nurses at the Albany Medical Center had won representation by the New York State Nurses Association.

“I’m not in a union but I’m glad those Albany Med nurses voted for the union,” Sandra Jones, 55, a Guyanese-born home health care worker, told Trowe. “We need unions, so we don’t have to deal with the bosses one by one.”

Albany party member Samantha Hamlin knocked on a door, where she and two brothers, Michael and Timothy Johnson, both grocery workers, got into a discussion about what workers face today.

‘Capitalism is the problem’

Timothy Johnson said he thought that capitalism “in its original form” was not intended to turn out the way it is today, and that “inequality needs to be lessened.” 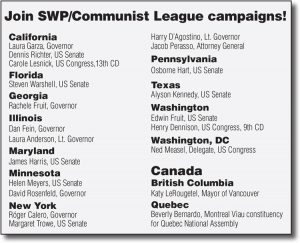 “Capitalism has, from its beginning, been drenched in the blood and sweat of workers,” Hamlin said. “To make a profit and be able to compete, capitalists must exploit labor and cut costs at our expense. Over time we have made some advances, but only through mass struggles, like the Teamsters organizing drives in the 1930s and the battle to end Jim Crow segregation.” Both brothers bought copies of the Militant to learn more.

To join with the party in doorstep discussions with fellow workers, or learn more about our program and activities, contact the SWP or Communist League nearest you.