Supporters of the Socialist Workers Party and its candidates in the 2018 elections are campaigning on workers’ doorsteps all across the country, introducing them to the party, its program and perspectives, the Militant  and books by party leaders. They are organizing to take advantage of both the three weeks left in the midterm election campaigns and the eight-week party drive to sell 1,400 subscriptions, 1,400 books and to raise $100,000 for the work of the party.

In Philadelphia, supporters of SWP senatorial candidate Osborne Hart went campaigning in the Rhawnhurst neighborhood Oct. 13. “The Democratic and Republican parties say they represent everyone but they slavishly serve the interests of the wealthy,” Cal Hansen told nurse practitioner Siri Larsen on her porch. “We are talking with you and other workers today about the need to organize our own working-class party and to build a labor movement that campaigns to organize unions, fights for amnesty for immigrants in the U.S. to unify our class, fights against cop brutality, for women’s emancipation, and against Washington’s wars.”

“I agree, the Democrats are just as bad as the Republicans,” Larsen said.

Larsen was interested in Hansen’s comments about how workers need to build strong unions. She said she was a social worker before training to be a nurse, and had taken part in a successful union-organizing drive.

“When I became a nurse, we voted in the union and it changed everything — pay discrepancies, nurses not having a voice on conditions and staffing levels that were unsafe for patients,” she said. Management at one local hospital fought the union drive by intimidating and threatening staff, she said, then sold the hospital to another company.

“We need a working-class party that fights to change that,” Hansen said. “Some workers at the retail store where I work have been talking about the need for a union. Some of them live near here. Would you be interested in getting together and telling us about your experience organizing a union?” 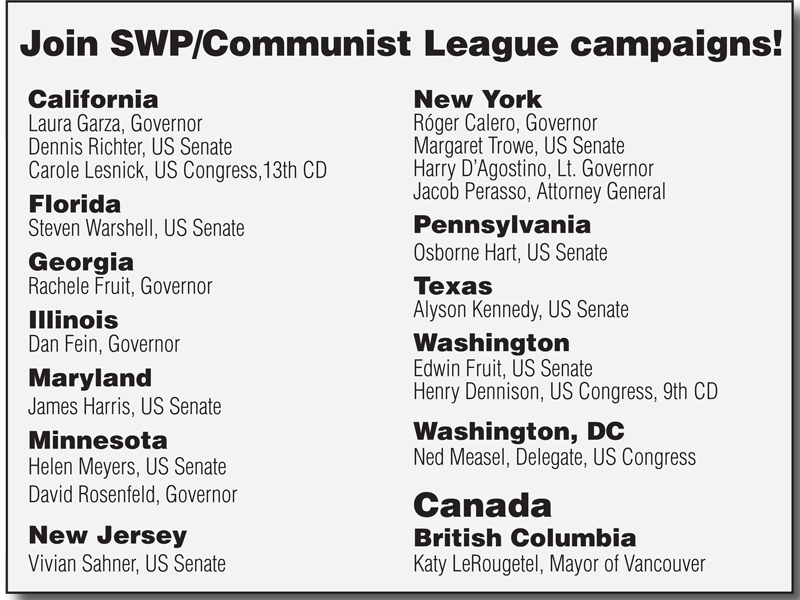 To learn more about the party she subscribed to the Militant and got three books on special offer — Are They Rich Because They’re Smart?  and The Clintons’ Anti-Working-Class Record, by SWP National Secretary Jack Barnes; and Is Socialist Revolution in the US Possible?  by party leader Mary-Alice Waters.

Before joining a picket line in Providence, Rhode Island, of striking school bus drivers — members of Teamsters Local 251 — SWP members from Albany, New York, knocked on doors in the Silver Lake neighborhood. First Student Inc., the bus owners, and local media had been trying to whip up sentiment against the strikers, who walked out after the bosses attacked their retirement funds.

Celeste Thomason, who operates an eight-child day care center in her home, told Ellen Brickley that she understood that bus drivers need a pension, but was concerned that the strike hurt the students who couldn’t get a ride to school.

“The bosses are trying to paint the unionists as irresponsible to cover up the attacks on their pensions,” Brickley said. “I think the company is trying to chisel the workers and we should support their strike.”

Brickley said we need a stronger labor movement that can champion workers’ struggles, and we need for the labor movement to break from the bosses and their twin parties, the Democrats and Republicans, and form a labor party.

Brickley showed Thomason Malcolm X, Black Liberation, and the Road to Workers Power  by Barnes and paged through the book and its lively photo signatures, pointing out how Malcolm and others fighting against racial prejudice and Jim Crow segregation were transformed through their struggle. That can happen today if we fight, she said.

“I think you’re right,” Thomason said. “I remember a few years ago when day care operators fought for and won a union and health care. We took the kids to the protests and they learned about what we were fighting for.”

She bought the book and subscribed to the Militant. “Keep doing what you’re doing,” she told Brickley.

Harry D’Agostino, the SWP’s candidate for lieutenant governor in New York and a professional musician, had some free time in Seattle Oct. 8 while on tour with his band. He joined Edwin Fruit, SWP candidate for U.S. Senate there, door-knocking in the Central District neighborhood and met a home worker named John, who said he hails from the tobacco region of Tennessee.

“We had a discussion on what is happening to working people in this country and what our class will have to do to organize ourselves and build the working-class movement, one that can become capable of taking power out of the hands of the capitalist rulers,” Fruit wrote in a report on the team.

“In Cuba workers and farmers built a revolutionary movement and took power,” D’Agostino said. “They began to organize the country in their class interests and drew millions into the revolution. They succeeded in overthrowing the U.S.-backed dictatorship and brought workers and peasants to power.

“International solidarity became a cornerstone of what they did,” he added, describing how Cuba led in sending doctors to fight the Ebola epidemic in Africa.

John said he was in Haiti after the devastating earthquake happened in 2010 and was impressed with the work of the volunteer Cuban medical teams he saw there.

“Can you imagine what could be done if the U.S. government mobilized its resources to send doctors to other countries?” John replied. “The world could be changed almost overnight!”

“That won’t happen under a capitalist government, where medicine is run as a business built around profits, not health care,” Fruit said. “But if we start building a workers party and the producers of the wealth — workers and farmers — take power, then that will happen.” John decided to try out the Militant and subscribed for 12 weeks.

As these accounts show, the party’s election campaigns and eight-week Militant, book and fund drive is helping strengthen the party’s central activity — engaging workers in cities, towns and rural areas.

If you want to help build the labor movement and think workers need their own party, join with the SWP in winning new Militant readers and contributors to the party. To get books and papers or to join with SWP members in door-knocking, please contact the nearest SWP branch listed here.

Working people are living through times today we haven’t seen in our lifetimes. The working class remains at the center of politics in the U.S. as the 2018 midterm elections are less than three weeks away. Although no one can…

Join SWP in taking its campaign out to workers!

The Militant calls on working people to join the Socialist Workers Party candidates campaigning up to the Nov. 6 elections. They are the only candidates who explain that working people need to break from the bosses’ political parties, the Democrats and…