The National Coalition Against Censorship and the American Civil Liberties Union of Florida have sent letters calling on Florida prison officials to cease their ongoing attempts to keep the socialist newsweekly Militant out of the hands of subscribers behind bars there.

Wardens and other Florida prison officials have impounded the paper at least 20 times in the past two years, violating the constitutional rights of the Militant and its subscribers.  Although the prison system’s Literature Review Committee overturned most of the bans — often only after the Militant appealed — it upheld five of them without explanation.

“The National Coalition Against Censorship was formed in 1974 to promote freedom of thought, inquiry, and expression. It opposes all forms of censorship,” the group’s executive director, Christopher Finan, wrote in its Nov. 28 letter to the Florida Department of Corrections.

The letter was cosigned by 13 organizations and prominent individuals, including American Booksellers for Free Expression, the American Library Association’s Office for Intellectual Freedom, and People for the American Way. The coalition itself is made up of 56 national organizations.

“The recently overturned ban on issue no. 34 of the Militant is an example of how prison officials have abused their power to censor,” Finan wrote. “They cited as justification an article about opponents of solitary confinement in California and another about the hunger strike by Oleg Sentsov, a Crimean movie director who was imprisoned in Siberia by the Putin regime. They claimed the articles could encourage ‘riot’ or ‘insurrection’ without explaining how.”

“Federal courts,” Finan pointed out, “have repeatedly affirmed that prisoners have a First Amendment right to read, and publishers and others have a right to send them reading materials.”

The Florida impoundments are four times more than the Militant has faced “in all the other prisons in the country over the last 10 years,” Finan noted. “We urge you to halt the frequent and unjustified efforts to disrupt the distribution of the Militant, which violate the First Amendment rights of both the publication and the inmates who wish to read it.”

The letter is featured on the coalition’s website ncac.org, headlined “Florida Department of Corrections Blocks Distribution of Socialist Newspaper.” It is also posted on the websites of the American Civil Liberties Union of Florida and the Militant.

In the letter from the Florida ACLU, Staff Attorney Benjamin Stevenson added that although the Literature Review Committee overturned the ban on issue no. 34 — after first reversing it, then reimposing it, then declaring it reversed again — “the timely delivery was delayed and its newsworthiness diminished.”

“Furthermore, prison wardens and the Literature Review Committee have a constitutional duty to detail the reason(s) for denying a prisoner’s access to the Militant,” Stevenson said. “However, far too often, the warden simply checks the may-cause-a-riot box or the catch-all box that the issue ‘otherwise presents a threat to security.’ Neither the warden nor the Committee explain why it may cause a riot or another specified threat.”

“This is unconstitutional,” he concludes.

The Militant has readers behind bars across the country, including in Florida, California, Arizona, Pennsylvania, Colorado, Illinois and New York.

Out of fights against censorship dating back to the Attica prison rebellion, New York state prison regulations include the Militant by name as one of the publications that “shall generally be approved.” But in Florida, local prison officials have no guidelines that require them to refrain from violating the constitutional rights of the press and their readers.

On several occasions they have violated their own rules by not informing the Militant of the impoundments or have withheld the paper from prisoners without a formal order of impoundment. The Literature Review Committee refuses the urging of the Militant and others to inform local prison authorities of this responsibility.

More than once the committee has upheld an impoundment only to then reverse themselves after public pressure — but not once have they given an explanation of what lies behind their decision.

The fight against the Florida authorities’ attempts to censor the Militant has sparked more interest in the paper on both sides of the prison walls. And the number of prisoner subscribers is increasing.

The Militant has received letters from prisoners across the country backing the fight, asking to subscribe, and sometimes asking for copies of the articles Florida has censored.

“Like all workers, prisoners need to be able to read and consider a wide variety of viewpoints to make up their own mind on where they stand on the most important political questions today,” Studer said. “Though the capitalist rulers’ so-called criminal justice system has put them behind bars, they remain part of the working class, interested in world and national politics.”

“The vote in Florida restoring voting rights to former prisoners. The vote in Louisiana requiring a unanimous jury vote to convict a person accused of a felony. Moves to end mandatory life sentences. These are all signs that working people don’t like the way their fellow workers are being treated,” Studer said. “Defending the constitutional rights of prisoners helps unify the working class.” 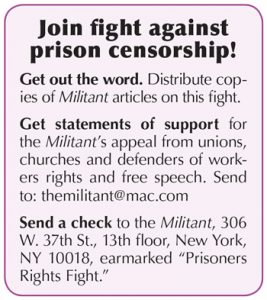