DALLAS — Socialist Workers Party candidate for mayor of Dallas Alyson Kennedy and her supporters are campaigning far and wide in Texas to defend the rights and living standards of working people. Her campaign is gaining the attention of those like Kathleen Moffet, a retired nurse, who “feel forgotten and disrespected” by those in government. “I like the way you talk!” she told Kennedy when the SWP candidate showed up at her doorstep to discuss what the party stands for.

Kennedy’s campaign was featured on the front page of the metro section and website of the Dallas Morning News  Jan. 14. Corbett Smith, the reporter who interviewed Kennedy, noted she had been the SWP candidate for president of the United States in 2016. “When Kennedy offered her mayoral platform, the threads of her national campaign were still present,” he wrote. “She called for amnesty for the millions of undocumented workers in the country — something over which City Hall has little influence — while arguing that their status drives down wages for all working people. To address Dallas’ infrastructure needs, a massive government-financed jobs program ‘at union-scale wages’ is needed, she said. Such a program would help provide sufficient wages to address affordable-housing needs, Kennedy said.”

He noted that Kennedy “was part of the first wave of female coal miners in the U.S., joining the United Mine Workers in 1981 and working in mines in West Virginia, Alabama and Utah.” She “helped organize miners — many of them immigrants from Mexico — to fight for improved wages and safer working conditions.”

Supporters of the Socialist Workers Party from other states have come to Dallas to reach out to working people across Texas who, like other working people in cities, towns and on farms in the U.S., face worsening economic and social conditions. They are increasingly open to a discussion about the working class taking power and replacing the dog-eat-dog capitalist system.

“Yes I agree the rich control the system. They get richer and the poor get poorer,” Billy Walker, from South Dallas, told Kennedy. Walker was jailed for 10 years after taking a plea deal.

Many prisoners in Texas are incarcerated in facilities with no heat in the winter and no air-conditioning in the summer. Kennedy told Walker her campaign supports the fight by prisoners in Texas to improve their conditions. The SWP candidate also calls for abolition of the death penalty, still regularly used in Texas, and an end to prison censorship of books and other reading material. Walker and his wife both signed a petition to put Kennedy’s name on the ballot for the May election.

As SWP supporters fan out, they’re getting a good response among working people wherever they go. Daisy Robinson, from Midlothian, a small town an hour south of Dallas, works at a Walmart store. Kennedy is also a Walmart worker.

“My husband and I came here from New Orleans after Hurricane Katrina in 2005. We had lost everything,” Robinson told Kennedy. In a wide-ranging discussion she asked the candidate about education in the schools, describing the difficulties her children are having with new standardized testing as the measure of learning.

“The education system under capitalism is used to teach children to be obedient and subservient,” Kennedy said. “Teachers who would like to see children and others get a better education and become more self-confident, are up against the character of what education for workers is supposed to accomplish for the rulers of this society.”

Kennedy told Robinson that her concerns are a good reason to support the fights of teachers, like the strike taking place in Los Angeles, and to learn more about why a socialist revolution is needed. Robinson said she was getting a lot out of their conversation. “I think you should continue what you are doing. It’s important work and so educational,” Robinson said. She purchased a copy of The Clintons’ Anti-Working-Class Record  by SWP leader Jack Barnes to get a better understanding about what working people are capable of in the fight for their own interests. She also got a subscription to the Militant.

The SWP campaigners give out a flyer that describes Kennedy’s life as a working-class fighter and her socialist program to everyone they meet. And they encourage them to get and read the books offered at special prices.

In Tyler, an industrial town 90 miles west of Dallas, socialist workers campaigning for Kennedy met Shawn Harris, a local barber and former U.S. Navy submariner. “Trump’s proposal to build a wall makes no sense,” he said. “I see it as another way to divide people.”

SWP campaigner Susan LaMont told Harris the party is part of the fight to win amnesty for all undocumented workers in the U.S. in order to unify the working class, and for labor solidarity with workers’ struggles to better their lives and conditions in Mexico and Central America. “Democratic and Republican party politicians are not trying to address what workers face there, or workers here,” she said. “They aim to defend the ability of the bosses to get cheaper labor and divide and attack all workers, not just those who come from other countries.”

Ayantu Aga, a young lab technician in Dallas, was also glad Socialist Workers Party campaigners had come to her door. Hilda Cuzco explained to Aga that the U.S. is ruled by a handful of wealthy capitalist families, and workers will need to make a socialist revolution in this country to prioritize the needs of the vast majority of the toiling population. “Yes, I believe that’s true,” Aga said, adding that “rich people run things in Ethiopia, where my family comes from, too.” She bought a copy of the new book In Defense of the US Working Class, along with a Militant  subscription

During the first three days of campaigning in Texas, socialist campaigners have sold 25 books by leaders of the Socialist Workers Party, drawing the lessons from working-class struggles for today’s generations of fighters. Another 11 people bought subscriptions to the Militant  and over 100 signed petitions to get Kennedy’s name on the ballot.

Further information about the campaign and how you can help is available by writing to dallasswpcampaign@gmail.com. 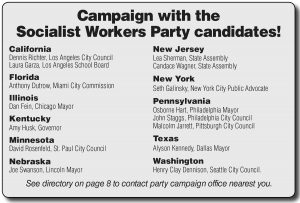 ‘Take a map, stop in towns along the road and campaign’

Members of the Socialist Workers Party and the Communist Leagues in Australia, Canada, New Zealand and the United Kingdom are knocking on workers’ doors in cities, towns as well as farming and ranching areas far and wide. In many places,…