In Opelika, Alabama, the next town over from tornado-devastated Beauregard, Janice Lynn reports that she and fellow Socialist Workers Party member Dave Ferguson went door to door March 8. They introduced the party and discussed the effects of the March 3 tornado and the challenges facing working people today.

“What’s needed is for workers to organize our own party to take political power,” Ferguson told everyone they met. “Only when society is run on the basis of working-class solidarity will it be possible to begin to provide for human needs in every situation.”

Lynn and Ferguson met Jimmie Tyson, a retired English teacher. “We have jobs that don’t pay enough, rising rents, unsafe working conditions, and unending wars. We live under a system that is based on making profits for a small minority,” Ferguson said.

“I know exactly what you’re talking about,” Tyson said. “You have the poor and the rich and a working class that is not doing well. I agree we need to do something.”

Lynn asked if she had followed protests by teachers fighting for decent wages, showing her the book In Defense of the US Working Class by SWP leader Mary-Alice Waters. The book describes these school workers’ actions and what they show about the capacities of the working class. Tyson readily signed up for a subscription to the Militant. She said she had been active in the teachers’ union, serving as president for awhile, and would consider getting the book.

Jennifer Chambers, 28, told SWP campaigners she was one of those workers who has three jobs — at the U.S. Postal Service, at the Walmart Distribution Center and at Big Lots, to try to get by.

“Our party supports workers fighting to build unions and for higher wages and safe working conditions. Building solidarity is key in working people gaining confidence that we can come together in struggle and win,” Lynn said.

Chambers got a copy of the Militant, saying she had several friends whose children were severely injured during the tornado in Beauregard. A worker at the Walmart Distribution Center in Opelika was among those killed by the twister.

‘The capitalist rulers fear us’

Alyson Kennedy, Socialist Workers Party candidate for mayor of Dallas, reports that she campaigned in Northwest Dallas March 11, accompanied by Hannah Caricol and Joseph, an electrician and member of the International Brotherhood of Electrical Workers. Joseph had previously met up with Kennedy after he read about her campaign.

They talked with Shonta Dixon, a city bus driver and a member of Amalgamated Transit Union Local 1338. Her neighborhood, Dixon explained, has “always been known as the Black community of Elm Thicket and is working-class.” Wealthier people have bought in across the road, building expensive houses and pushing taxes up. They “look down on us. They even had the name of this area changed to Preston Hollow.”

Kennedy showed her Are They Rich Because They’re Smart? Class, Privilege, and Learning Under Capitalism by SWP National Secretary Jack Barnes. “This book describes why meritocratic upper middle-class layers that staff the government bureaucracy and nonprofits, and sit in big college teaching positions truly believe they are the intelligent elite, meriting their advancement over workers.

“They use schools to drum into our heads that we’re just lowly workers who must be obedient and not get out of line,” Kennedy said. “But they are afraid of us, because they see more signs today that we will rebel against this setup.” She cited examples of working people fighting to change things, like the yellow vests in France and the teachers and school workers in West Virginia who’ve gone on strike the last two years.

“My party says we must keep protesting to make sure that the cop who killed Botham Jean in his own apartment here is prosecuted and jailed,” Kennedy said. “I am not political, I’m more religious,” Dixon responded, but said she agreed on the need to win justice for Botham Jean.

“It is good that you come to this neighborhood talking to the people who live here. You have my vote,” she told Kennedy. She bought a copy of the Militant  and told Kennedy to come back again so she could get some books and a subscription.

George Chalmers and Hannah Caricol met Melody Lawrence while they were campaigning door to door in Bedford, Texas, March 8. “The politicians don’t care about the working class. There should be somebody to voice what we need,” Lawrence said after learning about the SWP campaign in Dallas.

Lawrence said she thought immigrant workers should be able to make a living. “Our campaign,” Caricol said, “says all workers need to fight for amnesty for undocumented workers.” By fighting for the rights of the most vulnerable, she said, the working class can unite in struggle around our common interests.

Agreeing that the rulers fear such working-class struggles, Lawrence commented, “We outnumber them. That scares the crap out of them. We have power in numbers.” She said she wanted to find out what she could do to support the campaign and got a subscription to the Militant.

Kennedy was met with applause when she spoke at a mayoral candidates forum of about 100 held March 4 at the African American Museum of Dallas. She explained her campaign, showing Malcolm X, Black Liberation and the Road to Workers Power  by Barnes to two women who snapped it up. They pointed to a friend saying, “He’ll want this too.” He did, getting a copy and a subscription to the Militant. Another participant bought The Clintons’ Anti-Working-Class Record, also by Barnes.

Socialist Workers Party branches around the country, like sister Communist Leagues in Australia, Canada, New Zealand and the U.K., take the party and its campaigns to workers in cities, large and small, as well as rural areas.

The SWP is running a national slate of candidates in 11 states and campaigning for them all across the country. They speak in the interests of all those exploited and oppressed by capitalist rule.

To join with the SWP in campaigning on doorsteps, at union pickets and social protests, or to find out more, contact the SWP or Communist League branch nearest you. See directory. 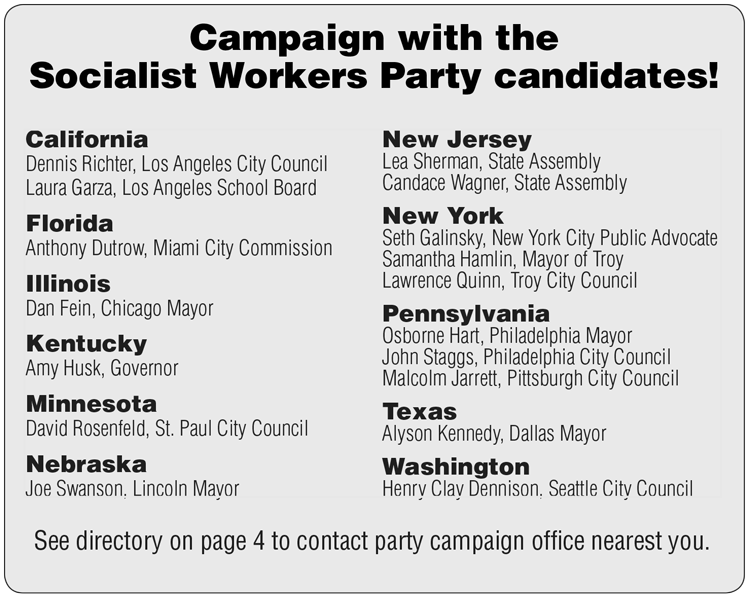 Front Page Articles
Feature Articles
Also In This Issue
Editorials
On the Picket Line
Books of the Month
25, 50 and 75 years ago
Corrections