At the heart of the week-in, week-out, political work of the Socialist Workers Party and its sister Communist Leagues in Australia, Canada, New Zealand and the U.K. is party members going out of the cities far and wide to talk to working people on their doorsteps, in villages, towns and rural areas. We introduce ourselves, our party, our candidates and program, and tell people about working-class struggles we think they should join us in supporting.

We want to discuss with workers, farmers and youth what can be done about the deteriorating conditions of work and life we face today, a product of the dog-eat-dog capitalist system. In the course of back-and-forth discussions that arise, we introduce the Militant  and books by leaders of the SWP.

We say only working people can forge a movement to unite all those who are exploited and oppressed to fight to defend our interests.

As Linda Harris, Communist League candidate for the New South Wales Legislative Assembly in Australia, says in her campaign flyer, “Through our labor, working people in this country and worldwide produce more than enough wealth to provide education, health care, housing and retirement to every human being on earth, for a lifetime. Our campaign is part of the working-class battle to recognize we are capable of acting independently of the bosses in the political arena, fighting to take power out of the hands of a ruling rich minority, and begin organizing society based on the needs and rights of working people.”

We discuss how the normal functioning of the capitalist system — its disdain for working people, its deepening social and moral crisis, and political developments worldwide, like the endless wars across the Middle East as well as the growing rivalry between the rulers of the U.S. and China — impacts the working class and its allies.

We discuss the big questions facing working people — like the need for our unions to fight for workers control over production and conditions on the job to prevent disasters like the two recent Boeing 737 MAX plane crashes. These were the product of the capitalist bosses’ drive for profit.

A boost to this work is the range of SWP candidates standing for office in 11 states across the country (see box this page), as well as Communist League candidates in other countries.

We offer books at special prices: Are They Rich Because They’re Smart? Class, Privilege and Learning Under Capitalism; Malcolm X, Black Liberation, and the Road to Workers Power; and The Clintons’ Anti-Working-Class Record, all three by SWP National Secretary Jack Barnes. Also, In Defense of the US Working Class  and Is Socialist Revolution in the US Possible?   by SWP leader Mary-Alice Waters; and “It’s the Poor Who Face the Savagery of the US ‘Justice’ System”: The Cuban Five Talk About Their Lives Within the US Working Class.

We also offer over 200 other titles on the history of union and political struggles and lessons of previous revolutions.

These books clarify, more lastingly and deeply than an article in the Militant can, that the carnage inflicted on working people today is the only future this system has to offer. They explain how workers and farmers need to break with the rulers’ political parties and state, and chart a course to take political power.

Alongside others, we are building the April 21-May 5 May Day International Volunteer Work Brigade in Solidarity with Cuba. This provides an opportunity for workers and young people to bring solidarity and their own class struggle experiences in the capitalist world, as well as to learn about the revolution and its 60-year history firsthand. Joining the hundreds of thousands of Cuban working people marching on May Day in Havana is a highlight of the brigade.

To join with us knocking on workers’ doors, and to find out more about the May Day brigade, contact the SWP or Communist League branch nearest you (see directory). 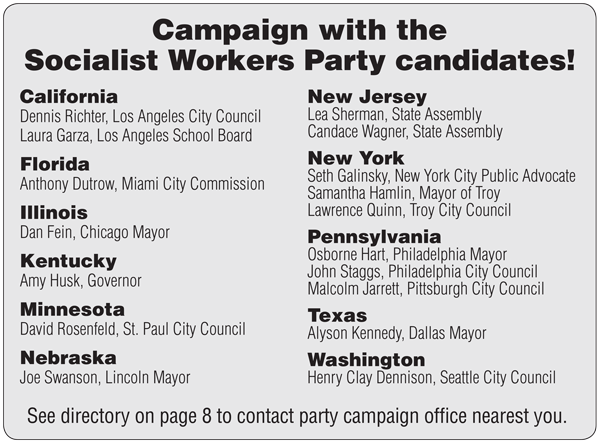