Florida prison officials have banned at least eight of the last 12 issues of the Militant. We say “at least” because they don’t always inform us the paper has been banned, even though they are required by their own rules to do so.

Their latest “reason”? They say we can’t write about our efforts to overturn their censorship. The impoundment notice for the most recent issue, no. 23, says it is banned because of the article “Fight against new censorship of Militant  in Florida prisons.” The ban on issue no. 22 says a front-page article “encourages protests against prison censorship.”

Several earlier issues of the paper were banned for writing about Albert Woodfox, who spent more than 40 years in solitary confinement in prison in Angola, Louisiana, framed up for a crime he did not commit.

Woodfox wrote a book titled Solitary: My Story of Transformation and Hope, an inspiring story of the efforts he and other inmates made to defend their humanity, and has been speaking at meetings in the U.S. and around the world, calling for an end to solitary confinement, a form of “cruel and unusual punishment” barred by the U.S. Constitution. His tour and the book have been widely covered in the New York Times  and other capitalist media.

They say appealing the bans — under the prison system’s own regulations — somehow “encourages activities which may lead to the use of physical violence.”

The prison system’s Literature Review Committee has so far overturned two of the bans, but upheld one, on issue no. 15, which reported on Woodfox’s New York tour.

The Militant ’s efforts to overturn this assault on freedom of the press and of the right of workers behind bars to read news and political opinions they choose has been joined by other opponents of censorship.

“We protest the repeated, unjustified confiscations of the Militant  by Florida prison officials. Dozens of issues have been impounded over the last two years — more than four times as many as have occurred in all the other prisons in the country over the last 10 years,” Christopher Finan, executive director of the National Coalition Against Censorship, said in a letter to the Literature Review Committee June 7. The ban on issue no. 15 “creates the suspicion that it was blocked because prison officials were offended by the criticism that Mr. Woodfox and other former inmates quoted in the article made of the prison system.”

The letter was co-signed by 11 other organizations, including American Booksellers for Free Expression, the American Library Association’s Office for Intellectual Freedom, the Freedom to Read Foundation, PEN America and the Kurt Vonnegut Museum and Library.

Amnesty International USA, the National Lawyers Guild and the American Civil Liberties Union in Florida have also written to the Literature Review Committee calling on it to overturn the bans.

Readers alert us to censorship

Florida prisoners often write the Militant  to make sure we know an issue has been impounded. And they filed their own grievances demanding they receive the impounded issues. One prisoner just wrote the Militant, noting Florida prison rules “provide we are to have access to news to keep abreast of the outside world. They make the rules. Then they break their own rules! I guess that tells you something.” 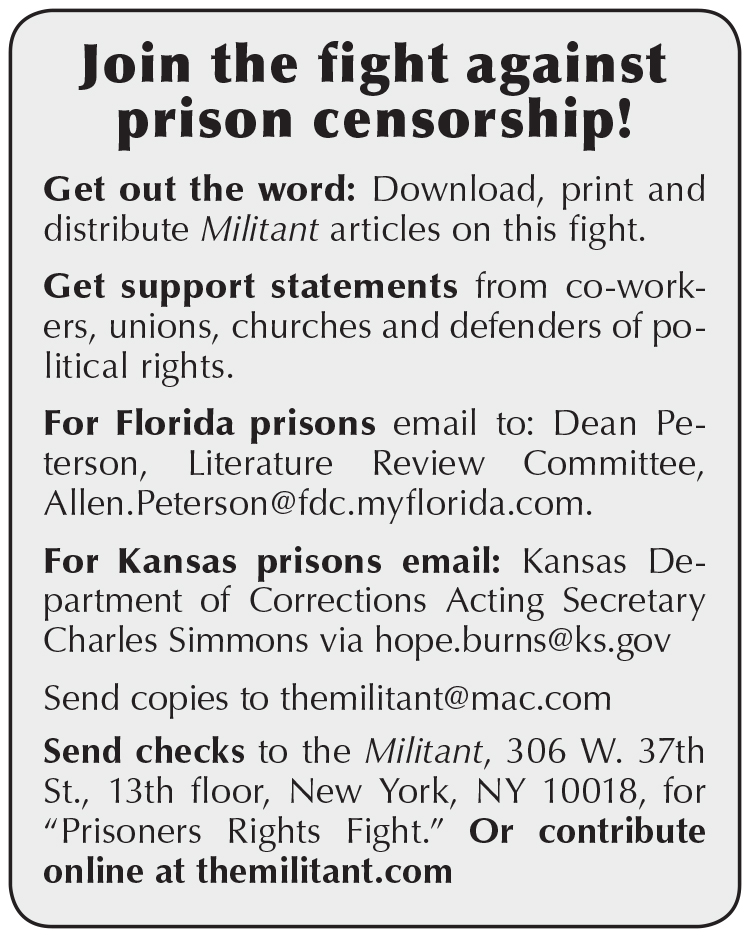 One Florida prisoner wrote that television news, radio news programs, and capitalist dailies like the Miami Herald  are available to prisoners in Florida and “are not ever censored.” Those media have carried news on prisoner hunger strikes, abuse of prisoners by prison guards in Florida and elsewhere, and censorship in the prisons.

It’s clear that the Militant  is being singled out by prison authorities in Florida because of its political viewpoint.

The Militant  has 140 subscribers behind bars in 21 states and is rarely censored anywhere but in Florida.

One recent exception is Kansas, where prison officials confiscated almost every issue sent to a prisoner there, without informing the Militant.

The Militant  learned about the censorship when Newsweek  published an article that reported that more than 7,000 books and periodicals had been banned in state prisons there. The magazine’s editors posted a complete list, which included the Militant.

Kansas Department of Corrections Secretary Roger Werholtz told Newsweek  that his office upheld all but 141 bans out of 1,622 that were challenged. But he admitted that “a quick perusal of the list does raise questions about the overzealousness” of their censors.

This week the Militant  finally received official notification from Kansas authorities about the ban of three issues, alleging the entire paper “poses a threat to the safety and security of correctional facilities.” The Militant  is appealing.

“We are calling on supporters of political rights to join our efforts to overturn every ban and help win broader support to defend freedom of the press and the right of our subscribers behind bars to read the paper,” said Militant  editor John Studer. “Prisoners have the right to read literature of their choosing, to think for themselves, to know what is going on in the world and to speak out.”