Florida prison officials informed the Militant they have impounded issues no. 24 and 25 of the paper, claiming articles reporting on the fight against prison censorship is “a threat to the security, good order, or discipline of the correctional system.” As it has with dozens of previous bans, the Militant will appeal.

Since 2013, prison wardens have impounded 37 issues. Through 2016 it was only one issue per year, all overturned on appeal. The censorship has expanded since then. Still, until April this year, the overwhelming majority of bans were overturned by the prison system’s Literature Review Committee — after the Militant protested — and given to the paper’s subscribers behind bars.

Over the last three months prison wardens have impounded nine issues. The review committee has only overturned two of these bans while upholding seven, though nothing has changed in the Militant’s political views or coverage, including on prison censorship.

Many of the Militant’s 55 readers in Florida prisons also appeal when they don’t get an issue. One sent the paper a copy of his grievance against the banning of issues no. 20, 22 and 23. He said the reason given by the warden was “a poor excuse and also a violation of freedom of speech and freedom of thought.”

In protesting prison censorship, “I am neither threatening nor endangering anyone, but simply doing what’s right,” he wrote.

The bans aren’t consistent. In 2016 the Militant ran a front-page article on the 45th anniversary of the Attica prison rebellion. It wasn’t banned. Nor was the issue in 2013 with an article on a hunger strike by 30,000 California prisoners. Nor did Florida officials impound any of the issues of the Miami Herald in 2015 and beyond that ran a series of articles exposing extensive abuse inside the Florida prison system.

Why does the Literature Review Committee uphold the ban on some issues for covering the fight against censorship, but reverse those on other issues, banned under the same pretext?

Despite repeated requests from the Militant’s lawyer, David Goldstein, the committee has never explained a single decision or its criteria. What is clear is that Florida prison officials have stepped up their censorship of the Militant, in violation of the constitutional rights of both the paper and its subscribers.

On July 16 the Human Rights Defense Center released a 279-page list maintained by the Florida Department of Corrections of thousands of books and publications impounded since 2012 as “a threat to security” and the results of reviews by the Literature Review Committee. The list includes coloring books and a Klingon dictionary. It shows that in all these years only one issue of the Miami Herald was impounded, in 2014. The list is available at prisonlegalnews.org.

WeCount! a community organization in south Miami-Dade County that promotes the interests and welfare of immigrants, sent a letter to the Literature Review Committee July 19 calling the Militant ban “unwarranted and arbitrary.”

“None of the articles are a threat to order or incite violence in the prison system,” the group’s executive director, Jonathan Fried, said. “Prisoners should have access to information and different points of view.”

Seth Galinsky, Socialist Workers Party candidate for New York City public advocate, spoke at the Harlem Book Fair July 20 to win support for the fight against censorship of the Militant. “We are fighting for the right of prisoners to read a wide variety of material, to consider different viewpoints, to think for themselves, to be part of the world,” he said. “Prisoners are fellow workers, brothers and sisters, behind bars.”

He urged people to join the National Coalition Against Censorship, the Florida American Civil Liberties Union, Amnesty International USA, National Lawyers Guild and others in sending letters to the Literature Review Committee urging them to stop censorship of the Militant. 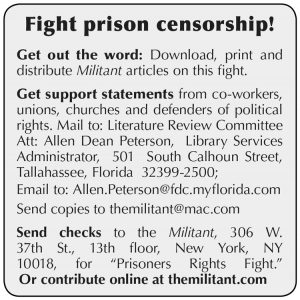