“When you stand up and fight, you are guaranteed to win a victory, even if you don’t accomplish all you set out to do. You set an example, you inspire others, you gain confidence in what we can do when we fight together,” Alyson Kennedy, the Socialist Workers Party 2016 candidate for president, told United Auto Workers union members on the strike picket line at the General Motors parts plant in Hudson, Wisconsin, Sept. 21.

“This strike is in the interest of all working people,” said Kennedy, a former coal miner and today a worker at Walmart. “We are all facing attacks from the bosses who, along with their media, government and political parties, try to make us pay for the crisis of their capitalist system. We campaign to tell the truth about your fight and to win support.”

Kennedy and Malcolm Jarrett, SWP candidate for Pittsburgh City Council, are on a national speaking tour. They have been organizing solidarity for the GM strikers, and spreading the word about miners in Cumberland, Kentucky, who are fighting for back pay stolen after Blackjewel coal bosses declared bankruptcy and left them on the street.

The central issue in the GM strike is the divisive setting against each other of different “tiers” of autoworkers — “legacy” workers, lower-paid full-time workers hired after 2007 and a growing number of temps. Tyler Rentz, 25, told Kennedy about his experience starting as a temp worker at Hudson before becoming full time. “I got paid way less than everyone else, and the benefits were bad,” he said, and temps don’t get a pension.

This is Rentz’s first union job. The UAW took on the bosses when they tried to force temps to work more than 10 hours. “I clocked out and went home,” Rentz said, and “the union stood up for the temps.”

Fights in the coal fields

The SWP campaigners spoke about the importance of the autoworkers strike and the Kentucky coal miners fight at a Militant Labor Forum in St. Paul, Minnesota, that evening. “The biggest discussion on the GM picket line is that the ‘person next to me’ is not making enough wages,” Jarrett said. “Workers are fighting to win the same conditions for all, for unity.

“The Blackjewel miners have shown leadership, shown discipline,” he said. “Their fight is about making the working class the center of politics again.

“The SWP campaign is looking for fighters,” he added, to join the SWP in labor solidarity, social struggles and to advance its campaign for independent working-class political action.

And as we talk to strikers and other workers, he said, we find real interest in the big political questions of the day — from the fight for amnesty for all immigrant workers to unify the working class to the demand for U.S. hands off Iran.

Steve Brown, a driver, said that a year and a half ago GM sold off some of its Bedford work assembling transmissions. Eighty jobs went to a nonunion company directly behind the factory. “The conditions in that plant are horrible,” said Brown. “They make $10 an hour on day shift.” He said a co-worker has a daughter who works there. When she wore a UAW shirt to work one day, the bosses told her she had to turn it inside out.

Kennedy and SWP supporters in Chicago talked with UAW members outside the Ford assembly plant of 5,000 there during the evening shift change Sept. 15. She described the fight of the Blackjewel miners. “It’s an example for all of us,” she said. “That’s why their fight gets so much support in the area, and they need the support of other workers around the country.”

“I’ve heard about what they’re doing,” contract maintenance worker Melvin Jennings told Kennedy. “I support them with all my heart. They are right in what they are doing, they should be paid.”

Jennings was one of 27 workers who bought a copy of the Militant.

SWP candidates and members build strike solidarity on the job, at union and other political meetings and events, and campaigning door to door in working-class neighborhoods far and wide. Knocking on doors on Chicago’s South Side, Kennedy and campaign supporter Dan Fein met Bogar and Juanita Rivera. Bogar works at an auto parts plant near Ford, and Juanita is one of 1,000 workers who were laid off from a potato chip factory, losing their jobs, health insurance and vacation pay. 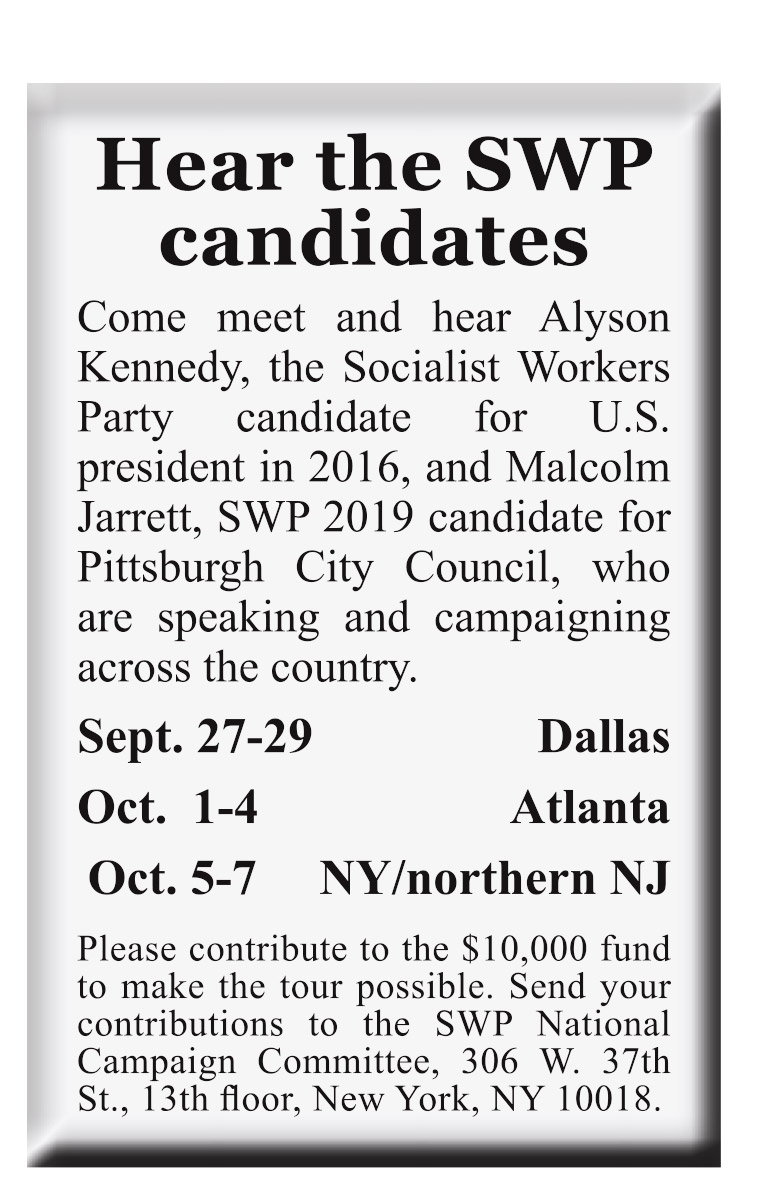 They told Kennedy about their work with Centro de Trabajadores Unidos, a group that fights for the rights of immigrants, inviting Kennedy and Fein to a dinner and dance it is having in October.

Samir Hazboun, SWP candidate for Kentucky lieutenant governor, joined the UAW picket line at the GM Corvette assembly plant in Bowling Green, Kentucky, Sept. 20. He was told that the majority of workers there had transferred from other plants GM bosses closed down.

“We’re not doing this for us, we’re doing it for everyone in the country,” said Dennis Wyatt, a pipefitter for 35 years. “If we can get a little something, then maybe other workers will say, ‘Hey, maybe we need a union.’”

Jack Bowers, president of UAW Local 2164 there, bought a Militant subscription for the local. He invited Hazboun and SWP campaign supporters to join in eating some pizza. “Longshore union members in Los Angeles just sent us a dozen pizzas,” he said. Amy Husk, the party’s candidate for Kentucky governor, went to Bowling Green three days later, on a bus arranged by UAW Local 862, which organizes thousands of Ford Motor Co. workers in Louisville.

“I’ve been an autoworker for 32 years,” said Renata McKenney, a retired Ford worker on the bus. “I started in Dearborn, Michigan, then worked in Lorain, Ohio, before in Louisville,” McKenney said. “We have to stand up for everybody or we can’t stand up for ourselves.”

“We campaign to win support for your fight among fellow workers and for the Blackjewel miners as well,” Husk said. “We must use these examples to strengthen the unions we have and organize to fight where we don’t have them.”

A dozen strikers got copies of the Militant, three subscribed and a number exchanged email and phone numbers to talk more.

If you’re interested in joining with the SWP to organize working-class solidarity and spread the reach of the party and the Militant, contact the party branch nearest you.

David Rosenfeld from Minneapolis contributed to this article. 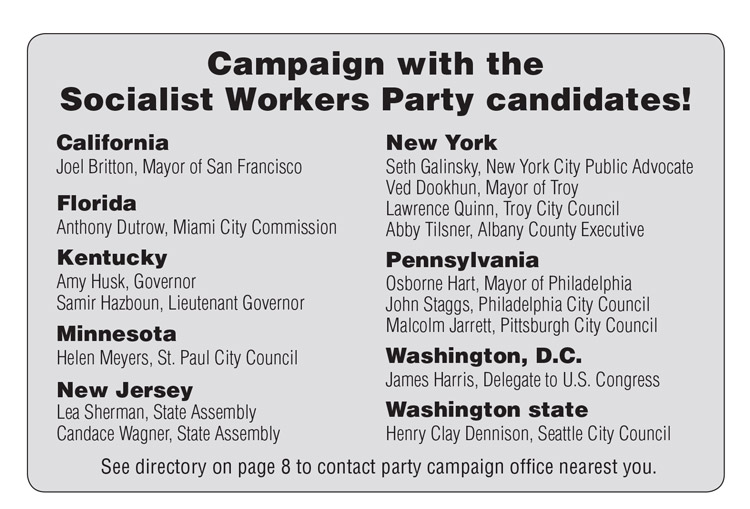