The campaign to expand readership of the Militant  and introduce working people to the program of the Socialist Workers Party has a brand new title to make use of, The Turn to Industry: Forging a Proletarian Party  by SWP National Secretary Jack Barnes.

The book explains that only a party with a working-class program and composition “can recognize the most revolutionary fact of this epoch — the worth of working people, and our power to change society when we organize and act against the capitalist class in all its economic, social and political forms,” writes Barnes.

Party members and supporters are finding this title and other books by working-class revolutionary leaders are attracting interest as campaigners speak with working people.

“We’re trying to organize a union at Delta Airlines, but they are fighting it all the way,” ramp worker Roderick Grooms told SWP member Rachele Fruit, outside his apartment in East Point, Georgia, Nov. 1. Grooms, who has worked at Delta for 10 years, signed up for a Militant  subscription. “We have no voice. They tell us what to do, and we’re supposed to jump, but we don’t have enough people to get the job done. They give us three people to work eight flights with no time for bathroom, lunch or water breaks. They call the system Rapid Recovery. We tell them, ‘The planes can recover; our bodies can’t.’”

“We have to begin to act together,” Fruit said, “to build a movement and leadership that is independent of the bosses and their government that can lead a fight to get rid of the capitalist system.”

Grooms said he would read the introduction to The Turn to Industry: Forging a Proletarian Party that’s printed in the Nov. 11 issue of the Militant  to see if he would like to get that book.

Socialist Workers Party members from Los Angeles were well received while campaigning Oct. 26 in a working-class neighborhood in Whittier, some 20 miles east of L.A.

When Bernie Senter introduced the party to Adrian Cano at his apartment, Cano responded that he had been out campaigning earlier that day, going door to door with members of his union, the carpenters, in support of Democrats.

“To strengthen our unions we need to build solidarity with other workers on strike like the copper miners in Arizona and the recent General Motors strike,” said Senter. “These strikes are taking place at the same time that hundreds of thousands of people in Lebanon, Chile, Hong Kong and elsewhere are mobilizing in the streets.

“For decades the unions have supported Democrats,” he continued. “The result is the unions have gotten weaker, not stronger. Weaker because it’s an obstacle to charting an independent working-class road forward.” SWP campaigners explain why workers need to break from the capitalist two-party system and build their own party — a labor party.

Cano told Senter that this perspective made a lot of sense. He got a subscription to the Militant  and the book In Defense of the US Working Class. Senter asked Cano to join him in campaigning for the SWP. “I’d like to do that,” Cano responded.

At another house in the neighborhood, Gloria Saenz signed up for the paper and purchased Are They Rich Because They’re Smart?  following a discussion with Senter and other SWP members about the copper miners’ and autoworkers’ fights. “It’s about time things started moving,” she said. That day six subscriptions and three books were sold in Whittier.

The nine-week drive to sell 1,100 Militant  subscriptions and 1,250 books goes until Dec. 10. It runs concurrently with the Socialist Workers Party’s fall campaign to raise $100,000 to finance its ongoing political work. The SWP Party-Building Fund through week four is at $33,485.  Efforts are needed to put the drive on schedule over the next couple of weeks as funds are urgently needed to cover the party’s political work, from reporting trips to meeting weekly expenses.

To encourage greater understanding of the party’s revolutionary program, all Pathfinder books and copies of the Marxist magazine New International are being offered at 20% off. In addition, eight titles are offered at half price when purchased with a Militant  subscription. The Turn to Industry: Forging a Proletarian Party is available for $10 with a subscription.

Layla Jimale, a 24-year-old culinary student, got a copy of that title as well as Malcolm X, Black Liberation, and the Road to Workers Power and a subscription to the Militant  after she attended a Militant Labor Forum featuring a talk by Henry Dennison, SWP candidate for Seattle City Council. The day before she had met SWP members who were campaigning in her neighborhood.

“I’ve learned so much from the second you guys knocked on my door,” she told SWP member Rebecca Williamson, “and I want to learn more.”

Hannah Pederson, 20, a student at the University of Washington, also attended the program. She had previously joined party members campaigning for Dennison door to door. “I would like to hear more about the SWP’s philosophy of running candidates and more about its platform,” she told Williamson, as she purchased a copy of The Turn to Industry.

Those wanting to join the effort to broaden the reach of the Militant  and revolutionary books and to contribute to the fund drive can contact the SWP or Communist League branches listed in the directory. 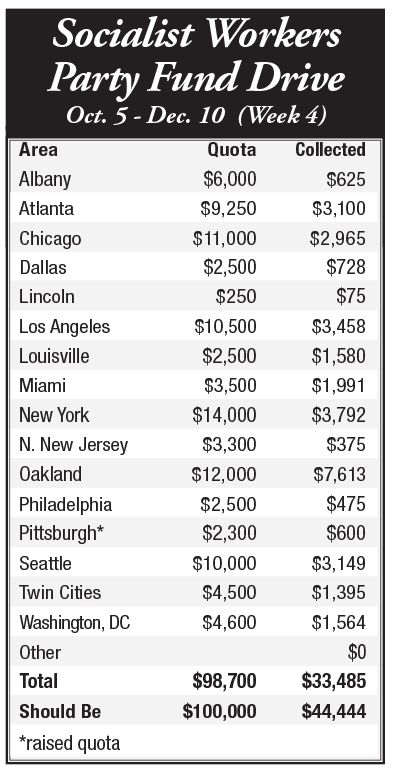