LATHROP, Calif. — Socialist Workers Party candidates campaigning for the party’s national ticket headed by Alyson Kennedy for U.S. president and Malcolm Jarrett for vice president are talking with workers about the party’s platform to confront the economic, social and moral crisis caused by capitalism.

Dennis Richter, the party’s candidate for Congress in the 37th District in California, and campaign supporters spent the day in this town of 22,000 people a couple hours east of Oakland Feb. 15.

When Richter met dental assistant Mayra Mejía at her home, he pointed to the campaign button he was wearing for Kennedy and Jarrett, which includes the call “For Workers Control of Production” and “Build a Labor Party.”

Mejía said she is well aware of the struggle workers are having just to survive, but is unsure what can be done about it.

“What’s key is what we as workers can do together,” Richter said. “A tiny group of billionaires rule this country. Workers need to strengthen our unions, defend our wages and working conditions, and build a labor party that can move toward taking power away from the exploiting class.”

Mejía said there are a lot of homeless people in the nearby town of Manteca. “They have been dumped there by the government in San Francisco,” she said. “That’s really wrong don’t you think?”

“They need jobs that pay enough to have a home and support a family,” Richter said.

“The problem of homelessness among working people will not be solved without a revolution,” Richter explained. With a workers and farmers government in power, he said, “we could solve these problems quickly. We would see the homeless as part of us, the working class.”

Richter and campaign supporter Libby Kiser said that Cuba is an example of what is possible when working people carry out a revolution and take power away from the capitalist class. Kiser was part of the International May Day Brigade to Cuba last year. (See article on front page on this year’s brigade.)

“Cuba is famous for medical care that is not bought and sold as a commodity, but is a right,” Richter said. “They sent doctors to Africa to fight Ebola. It wasn’t charity.” They considered the people in those countries as  “part of the solution, treating them with respect.”

“If you go to Cuba, you will see this kind of solidarity,” added Kiser. “You see people on an everyday level helping each other.”

Richter and Kiser encouraged Mejía to consider going on the May Day brigade, where she could learn about how workers who made a revolution have changed their conditions and themselves. Mejía subscribed to the Militant  and bought a copy of The Clintons’ Anti-Working-Class Record: Why Washington Fears Working People and said she wanted to learn more about the brigade.  Richter and Kiser promised to keep in touch.

“The Socialist Workers Party candidates speak for the interests of the working-class,” Kennedy told Miguel Martínez, who has worked for 21 years for a veterinarian, treating farm animals. “We need to stand up and fight for better conditions. Through this we build up self-confidence that can lead to building a much more powerful movement. That’s what will change our conditions, not the elections.”

“I have been involved in several strikes myself in Mexico when I worked at PEMEX oil company in the 1980s and ’90s,” Martínez said. “There are not many jobs here. Some people work in the agricultural nurseries that grow tomatoes and sweet potatoes getting just $5 an hour.”

Kennedy pointed out that the party’s 2020 platform calls for a fight for a federal government-financed public works program to put millions to work at union-scale wages.

Martínez also raised the problems faced by immigrant workers who don’t have U.S.-authorized documents. Many can’t return to visit their home countries, even for funerals of parents and other close relatives. The SWP calls for amnesty for all 11 million undocumented immigrants in the U.S., Kennedy said.

Martínez bought a subscription to the Militant  and a campaign button.

Kennedy spoke with 85-year-old D. Means who told her, “I get no pension from the church,” where she worked as a secretary for 43 years. “I live on Social Security.”

“We’ve always been Democrats. But I did vote for Trump because I didn’t like Hillary Clinton and couldn’t bring myself to vote for her,” she said. “I’ll probably vote for Trump again because the Democrats are just putting each other down in the debates,” referring to the sharpening battle between the party’s socialist and centrist wings for its presidential nomination.

“The job of the president, Democrat or Republican, is to ensure that the wealthy keep raking in profits,” Kennedy said, adding that no matter which of the bosses’ parties wins the race for the White House, the crisis workers face under capitalism will continue.

That’s why the SWP candidates explain that workers need their own party, a labor party, to speak out in the interests of all workers.

“Another reason I support Trump is I like what he has done in building the wall,” Means said. “They’re blaming Trump for kids being left, but the parents should stop bringing their kids illegally.”

Kennedy explained why her campaign supports the fight for amnesty for undocumented immigrants. The U.S. capitalist class depends on immigrant labor, including those who are undocumented and live in fear of deportation, to better compete against its rivals around the world. By paying immigrants less they push down the wages of all workers and increase capitalist profits.

That’s why the 2020 campaign platform says that amnesty for all undocumented immigrants is “a life-and-death question for the unions to unite workers and cut across divisions” fostered by the bosses, she said.

Kennedy will be campaigning in Kentucky next and then heads to Arizona where she will join a Feb. 24 protest rally by copper miners on strike against Asarco. 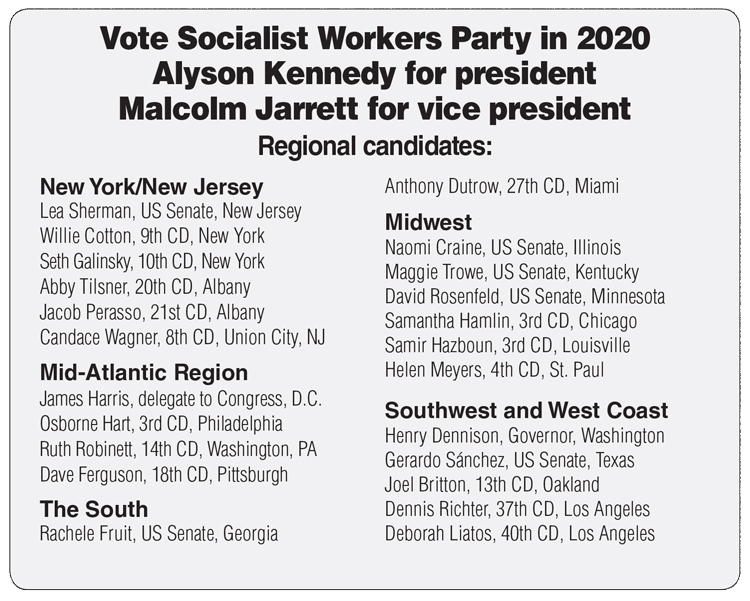 ALBANY, Ga. — One of the largest workshops at the Federation of Southern Cooperatives 37th annual conference here Feb. 13-14 discussed the challenges Black farmers face in keeping land they inherited from parents or grandparents who had not left wills…