“It’s good you’re here in the community and I can meet and talk with you,” said Roberta Young, one of dozens of workers who stopped to talk with them. Kennedy works as a cashier at Walmart and Jarrett is a commercial cook in Pittsburgh.

“The rich and their parties — the Democrats and Republicans — think they know what’s best for working people,” Jarrett told her. “The bosses they serve say they can’t afford to pay higher wages and then just want us to work harder.”

“I just got back from Arizona where 1,700 copper workers have been on strike against Asarco for five months,” Kennedy said. “After going without a raise for 10 years plus facing the bosses’ demand for another four-year wage freeze and doubling or tripling of health care costs, they said, ‘No more.’ It’s an example of what workers need to do.”

While speaking with Josue Rodriguez, Kennedy noted that the way the government is dealing with coronavirus shows how capitalism not only can’t solve humanity’s problems, but makes them worse. She pointed to the lack of accurate information, inadequate testing and medical care, the bureaucratically imposed lockdowns, all implemented by the capitalist rulers the world over, which leave people on their own.

Kennedy contrasted health care under capitalism — where it is a commodity, sold to those who can afford it, to maximize profits — and Cuba where it is guaranteed to everyone.

Rodriguez knew about Cuba’s health care system. “Cuba is not scared of the coronavirus because they have a system that takes care of people,” he said. “But in Mexico, the way they treat people there is the same as here. The problem is the system. They exploit people.”

Pedro Albarran, a union leader at the processing plant, joined the candidates and introduced them to his co-workers. “As workers we don’t have representation in government,” he told Zenaida Lagunas. “They are workers like you and me. They are part of the fights for better conditions on the job, health care and fair wages.”

“The capitalist system can’t be fixed. It will take a movement of millions to get rid of it,” Kennedy said.

“People need to stand up for themselves and become confident,” Lagunas said.

Victor Jarman was skeptical about the campaign. “Politics is just another hustle. People in Congress and the Senate are some of the richest people there are,” he told Kennedy. “What specifically do you people want to do?”

“The two-party system is a trap,” Kennedy replied. “They try to make us think we can make change by picking the least bad of candidates they put forward. It’s a scam.” The Socialist Workers Party 2020 platform says workers need a labor party based on the unions, a party that organizes working people to fight all year round for the interests of all the oppressed and exploited.

Workers need to begin organizing in defense of their own interests. “Workers need to bring solidarity to fights like the Asarco copper miners on strike in Arizona and Texas,” Kennedy told him. “And the ongoing fight in Florida for the right of the formerly incarcerated to vote. A referendum there to do this passed by over 60% in 2018 but the state government is trying to gut it.”

Workers they met at the plant gate bought two books by SWP leaders, 14 copies of the Militant and two subscriptions, and contributed $30.

Talking to workers on their doorstep

Jarrett met Ernest Williams while campaigning in North Long Beach Feb. 27. “I worked for the City of Long Beach,” Williams said. “Now that I’m retired I’ll have to pay half my pension, $1,200 a month, to have health care.” Jarrett pointed to the campaign plank in the Militant that says, “Health care for all. Fight for universal government-guaranteed cradle-to-grave health care, and retirement income for all.”

The SWP candidate told Williams that he had just returned from participating in the Havana International Book Fair in Cuba. “I met doctors who traveled to Africa to help eradicate the scourge of Ebola. It’s an example of the revolution’s internationalism,” Jarrett said. 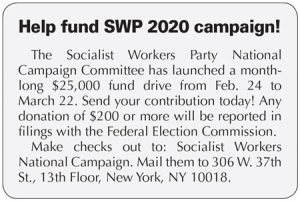 Their attitude is similar to that of Malcolm X, he said, showing Williams the book Malcolm X, Black Liberation, and the Road to Workers Power by SWP National Secretary Jack Barnes. “Malcolm X said you don’t have to wake people up to their oppression but to their worth,” said Jarrett. Williams bought the book and one other, along with a Militant subscription.

Kennedy and Jarrett also spoke at a Militant Labor Forum Feb. 29. “Cubans are very honest about the problems and challenges they face,” Jarrett said, coming back to his experiences in Cuba. “They have blackouts sometimes and a shortage of gasoline, results of the U.S. rulers’ economic war on Cuba.

“But you see a determination to defend their revolution,” Jarrett said. “One soldier told me, ‘We’ve faced this embargo for 60 years. We’ve had to ride bicycles in the past because of lack of gas. They’re not going to beat us.’

“The Cuban Revolution is an example for working people in the U.S. to emulate,” he said.

Deborah Liatos contributed to this article. 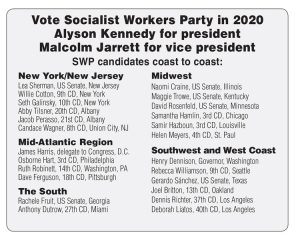 ‘Workers need to rely on themselves in fight for safety’

OAKLAND, Calif. — Joel Britton, Socialist Workers Party candidate for Congress in the 13th District here, campaigned Feb. 29 in West Oakland, where trichloroethylene, an industrial solvent linked to increased cancer risk, has been found in the groundwater under McClymonds…

HAYDEN, Ariz. — During a solidarity  trip Feb. 23-25, Alyson Kennedy, Socialist Workers Party candidate for president, discussed politics and the labor movement today with striking copper miners. She learned more about their fight against Asarco’s union-busting to share with…

Front Page Articles
Feature Articles
Also In This Issue
Editorials
Books of the Month
25, 50 and 75 years ago
Corrections