SAN LEANDRO, Calif. — Socialist Workers Party presidential candidate Alyson Kennedy and vice presidential candidate Malcolm Jarrett campaigned at a housing complex here March 11. Residents are fighting against efforts to force them out of their low-rent apartments. The visit was part of five days of campaigning in the San Francisco Bay Area.

The SWP candidates also joined a protest against shutting down the Seton Medical Center in Daly City, just south of San Francisco, and campaigned in other working-class neighborhoods (see accompanying article).

Residents of the Hesperian apartments, a complex of 80 duplex units, say that the new landlord has offered them up to $5,000 if they move out by April 13. The company plans to “renovate” the apartments and then nearly double the rent to $2,500 a month. The landlords are pressuring people to take their offer now or risk being forced out without compensation. Some 75 residents joined an outdoor meeting in early February to discuss what they could do.

“We can use all the support we can get,” Donna Borders, who has lived there for over 30 years, told Kennedy when campaign supporters knocked on her door. “Many here are on Social Security. Others have kids. They are not going to be able to afford more rent.”

“This is happening more broadly,” Kennedy said. “Capitalist landlords have been raising rents everywhere. With wages what they are, workers can’t afford that. The only way we’ll turn this around is by building a united movement of workers, and breaking any reliance on the promises of the ruling rich and their parties.”

The Socialist Workers Party 2020 campaign platform calls for a government-financed public works program, including “quality affordable housing” that workers need, to put millions to work at union-scale wages. Wages like that would ensure workers could pay the rent. To win demands like these will take “organizing and strengthening the unions, and building our own party, a labor party,” Kennedy said.

Ed Borders, Donna’s husband, joined the discussion. A retired truck driver, he questioned whether unions will help. “They were good in earlier times, but now they’re corrupt,” he said.

“Workers need unions where we can organize and use our power,” Kennedy said. “We have to transform these unions, so we can fight. The unions are weak because the union officials tell workers to rely on Democratic Party politicians who say they are ‘friends of labor,’ but are part of the capitalist rulers’ political system. Our unions need to be rebuilt out of struggles to defend our wages and working conditions and through solidarity with other workers’ battles.”

“I have leaned toward seeing the Democrats as pro-worker,” Ed Borders said. “But I guess they’re all politicians. They don’t really care about us.”

Neighbors from two other apartments joined the discussion. One of them, a landscaper, bought a subscription to the Militant  that they could all share.

On March 13, Jarrett and Joel Britton, the SWP congressional candidate in District 13, campaigned in West Oakland. Residents there are demanding government action to remove contamination after a carcinogenic chemical was found in the ground water under McClymonds High School.

That same day, Kennedy and Jarrett exchanged views with some San Leandro Walmart workers on how we can fight for our rights today. The workers had signed a card of solidarity with copper miners on strike against Asarco in Arizona and Texas.

In Lathrop, a city in the agricultural San Joaquin Valley 60 miles east of Oakland, the Socialist Workers Party candidates knocked on the door of Raul Villalvazo, who had worked on ranches in California for many years. Villalvazo, 80, told them “the rich people have gotten rich off the land.” He liked what they said about the example of Cuba, where workers and farmers made a revolution and took control of their own future, saying he has backed the revolution since he was 18. He subscribed to the Militant.

“Workers won’t stop looking for ways to stand up to the bosses’ attacks on wages and working conditions, including to the government’s criminal response to the coronavirus,” Kennedy told a Bay Area-wide campaign meeting March 14 at a community center here. “The deepening economic crisis wasn’t fundamentally caused by the coronavirus, but it has dramatically exacerbated it.”

The rapid fall in the stock market, the shutting down of production across the world, and the efforts by capitalist rulers everywhere to put the burden on the backs of working people, exposed the challenges facing us today. In face of the unfolding disaster, the program of the Socialist Workers Party is more important than ever.

“Our campaign points to what working people ourselves can become when we organize and fight together in our own class interests,” Kennedy said.

Libby Kiser, a fitness center instructor, endorsed the campaign. “I was with the candidates at the meeting where people were fighting to save the Seton hospital,” she said. “One of the people who testified appealed to the politicians and owners closing it, saying they should have a heart. I wanted to yell out, ‘No, they don’t have a heart.’ This campaign shows it’s the workers who will change things, that we do have that power.”

At the meeting, more than $2,300 was collected to help fund the campaign. Organizers urged supporters to join in upcoming campaigning and efforts to put the SWP candidates on the ballot in a number of states. 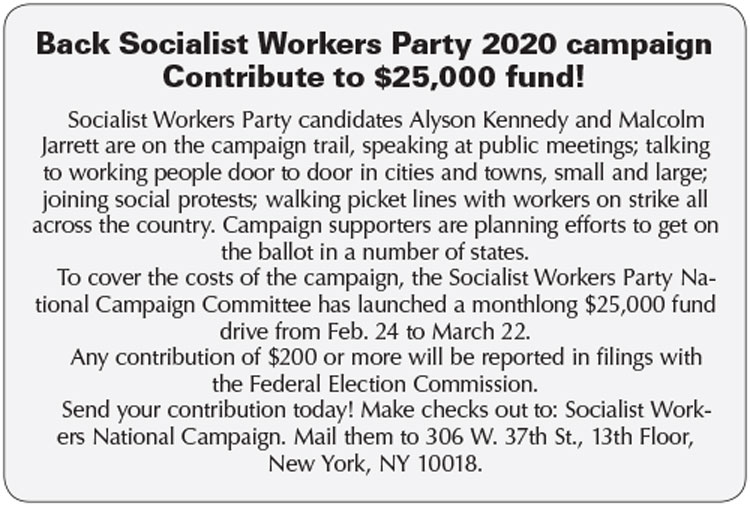 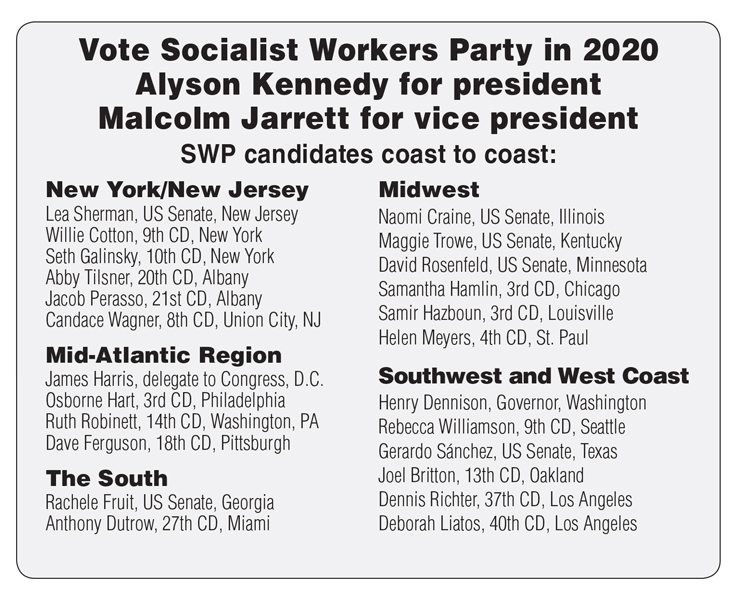 DALY CITY, Calif. — Nurses and hospital workers, members of the California Nurses Association and the National Union of Healthcare Workers, have been organizing protests here against the closing of Seton Medical Center, the largest employer in this working-class city…

JULIETTE, Ga. — Signs were visible in yards all around this rural Georgia town of 1,500 near Macon that read “Georgia Power: Clean Up Your Trash!” when Rachele Fruit, Socialist Workers Party candidate for U.S. Senate, campaigned here March 7.…