Following widespread protests worldwide by hundreds of thousands of working people after Minneapolis cops killed George Floyd, demonstrators against police brutality continue taking to the streets. The number and size of these actions are smaller than over past weeks, but families who have had loved ones killed gained renewed confidence to press forward the struggle to get the cops responsible prosecuted.

The family of Breonna Taylor, shot dead in her apartment March 13 by cops with a “no-knock warrant,” have made the fight to get the cops charged for her killing a prominent part of demonstrations around the country.

As a result of the determination of working people and youth to join protest actions, the cover-up of the cop killing of Elijah McClain last August in Aurora, Colorado, is now coming apart. McClain, 23, was walking home from a convenience store when three cops stopped him after receiving a complaint about a young Black man acting “suspicious.” McClain was wearing a mask and waving his arms, which he routinely did outside because he had anemia — a blood condition — and became cold easily.

According to a police body camera, McClain tells the officers, “I am going home. … Leave me alone.” But instead they handcuff him and put him in a chokehold. He repeatedly tells them, “I just can’t breathe.” They have him injected with ketamine, a powerful sedative, at a dose high enough to put down a 220-pound person. McClain weighed 140 pounds. He suffered cardiac arrest on the way to a hospital.

The killing was promptly swept under the rug, with District Attorney Dave Young announcing that no criminal charges would be filed. The police department upheld the officers’ actions as “consistent with training.”

Thousands demonstrated against the killing in Aurora June 27. Musicians traveled from all over the U.S. for a violin-concert vigil in a park near the Aurora Municipal Center. McClain, a violin player himself, often played for animals at local shelters. Police using pepper spray and batons tried to break up the gathering that evening.

Photos showing three Aurora cops mocking the killing of McClain over eight months ago were released July 3. Showing utter contempt for the lives of those they claim to serve and protect, the cops pretended to put chokeholds on each other near a memorial for the slain young man. 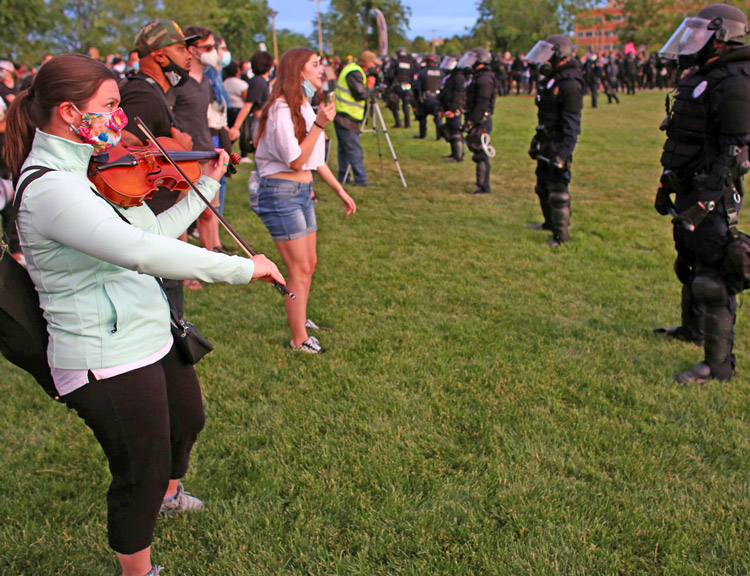 One of them, Jaron Jones, resigned shortly before the photos were released. In an effort to quell growing outrage, the police chief then fired the other two, Erica Marrero and Kyle Dittrich. Another cop who was involved in killing McClain, Jason Rosenblatt, was terminated for replying “ha, ha” after receiving copies of the photos by text messaging.

Hundreds of demonstrators marched from the McClain memorial to the Aurora police station July 3. McClain “did nothing wrong,” Pamela Howard, one of the protesters, told the Denver Post. “I wish we would have done this a long time ago.”

Since the killing, McClain’s family has fought for the prosecution of the officers involved.

Dozens of protesters took to the streets July 5 after cops in Phoenix killed James Garcia the previous day as he sat in a parked car.

Four cops, with weapons drawn, surrounded the stationary vehicle in a driveway of a friend Garcia was visiting. One cop shouted, “Hey, stop f—— moving. I will f—— shoot you,” a video by a bystander shows. The cops told Garcia to get out. He refused, so they shot and killed him.

The cops say they were responding to a complaint about a man suspected of an aggravated assault the week before. A second action to protest the killing was held July 6.

In Mississauga, Ontario, hundreds of people rallied at the headquarters of the Peel Regional Police June 27 to protest the cop killing of 62-year-old Ejaz Choudry a week earlier.

“It’s been seven days and those officers are still out there,” Khizar Shahzad, a nephew of Choudry, told the protesters, saying pressure needs to be put on authorities to “do something about it.”

The rally was organized by the National Council of Canadian Muslims. Mustafa Farooq, chief executive officer of the group, called for an end to police brutality so that we have “no more names” that we have to say of people beaten or killed by the cops.

“Unions need to get involved in these kinds of fights,” school teacher Felipe Pareja told the Militant at the rally. “We’re more powerful as we act together.”

According to his family, Choudry, who suffered from schizophrenia, was having a mental health crisis when police barged into his apartment for a “wellness check” and shot him. Choudry, a father of four, was originally from Pakistan.

Fighting for authorities to indict cops responsible for these killings helps educate millions about the real role of police under capitalist rule. The breadth of recent protests also provides a powerful example of the capacities of working people to stand up to the brutality the cops unleash.

At the same time that several of these fights are drawing increased attention, Democratic Party politicians and middle-class radicals prominent at many protests perpetuate the illusion that the brutality cops inflict on working people can be brought to an end by various reforms and by voting Democrats into office. They call for “defunding” or “abolishing ” the police. When the cops are under fire liberals always offer ways to “improve” their conduct. But cops are an integral part of an inherently brutal social system based on the exploitation of working people.

As long as capitalism exists, the bosses and their government will use the police to mete out punishment to protect the profits, property and power of the ruling class.

In Seattle in early June, middle-class radicals took over a six-block area that included a police precinct building — with acquiescence of city authorities. They renamed the area CHOP — the Capital Hill Occupation Protest — proclaimed it a “no cop co-op” and appointed their own armed thugs to do the policing. Their actions had nothing to do with the steps the working class will take in the course of deepening mass struggles to defend ourselves from the cops’ assaults on our picket lines in a disciplined way, led by proven fighters from our own ranks.

Inevitably the CHOP led to disaster. Over nine days two Black teenagers were shot and killed in the occupied area and others were wounded. No one has been charged with the killings.

“This doesn’t look like a protest to me no more,” Horace Lorenzo Anderson, whose son was shot to death there, told the media.

After three weeks, Mayor Jenny Durkan changed her stance and ordered the cops to move in and dismantle the occupation.

As long as the capitalist social system exists, calls to abolish the police take working people away from eradicating the root of the problem. Large numbers of working people prefer some kind of police presence hoping it will deter criminal gangs operating in the neighborhoods where our families live, at the same time that growing numbers are also determined to join fights against cop brutality.

The road forward is to end the social system that breeds cop brutality by organizing working people in their millions to take political power. Workers and farmers in Cuba showed that this is possible through the socialist revolution they made in 1959 and have defended ever since.