LOUISVILLE, Ky. — Socialist Workers Party members are finding just as much receptivity to the Militant, books by party leaders and other revolutionary leaders, and the action program they raise for workers and our unions to fight on today, as they did before the Nov. 3 elections. Many working people know that no matter who is in the White House there is no end in sight to the capitalist economic and social crisis.

With two weeks to go to complete the fall subscription drive, campaigners from the Socialist Workers Party and the Communist Leagues in Australia, Canada, New Zealand and the United Kingdom have sold 950 subscriptions to the Militant and 895 books, toward the goal of 1,200 subscriptions and an equal number of books.

“We’re winning new contributors to the fund,” SWP campaigner Kaitlin Estill reports. “In Bowling Green, Kentucky, we stopped by the house of Kenneth Matczak, a United Auto Workers union member we met during the GM strike last year. We discussed the elections, the SWP action program, and the outcome of the strike. He renewed his subscription and gave $10 to the fund.”

In Carrollton, Georgia, Rachele Fruit spoke with Sherman Daniel, a machine operator at Southwire, on his doorstep Nov. 7. “Southwire doesn’t care about us at all,” Daniel said. “We’ve had eight or nine active cases of coronavirus in the plant,” but the company has done nothing to confront the problem. “We need to organize to fight growing employer attacks on our jobs, wages and working conditions,” Fruit said, and to fight for workers control of production, the only way to enforce safety on the job.

“Neither the Democrats nor Republicans have a jobs program and neither one will organize workers in a way that can minimize deaths from COVID-19,” Fruit said. She pointed to the need for a government-funded public works program to provide jobs for millions of unemployed, building housing, hospitals and other needed infrastructure.

“We need a workers’ party — a labor party —  to fight for the interests of the working class and working farmers,” she said.

“I think it’s worth thinking about this idea of a new party for workers,” Daniel said. “I’m going to read this.” He subscribed to the Militant.

Retired worker Vandous Fisher Jr. liked the Militant’s coverage on labor struggles when SWP member Michelle Smith showed him the paper in the small town of Centralia, Washington, Nov. 6. “I’ve walked my share of picket lines, including in 1980 against Exxon Mobil in Baton Rouge, Louisiana, when I was in the painters union,” he said. He was pleased to learn that Smith had been the SWP candidate for governor in Louisiana in 1983, presenting a working-class alternative. He subscribed to the Militant.

“You’re a little late aren’t you?” retired worker Harold Edge joked when SWP campaigners Seth Galinsky and Róger Calero knocked on his door in the Bronx, New York, Nov. 6. “Yes, the election is over,” Galinsky said, “but working people like you and me are going to face the same problems we did the day before the election.” Edge, who is African American, said he was a lifelong Democrat and was glad Trump was voted out.

As a youth he heard Malcolm X speak at the Audubon Ballroom and keeps a picture of him on the wall. Galinsky described what Malcolm said about the Democratic and Republican parties during the 1964 election. “The shrewd imperialists knew that the only way that you will voluntarily run to the fox,” Malcolm had said, “is to show you a wolf.”

“That was true then,” Edge said. “But the Democratic Party has changed.”

Edge thought that millions voted for Trump because of racism. “We’ve talked to a lot of workers who said they were voting for Trump, especially in small towns and rural areas, just like we’re talking to you,” Calero said.

“You should join us next time we go to those areas,” Galinsky said. “You’ll find they’re not racist, they’re grappling with the same crisis that you and I are.”

“This is the first time I’ve really felt comfortable talking with other people about Trump and what he represents,” Edge said. 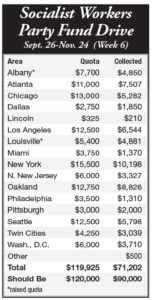 “I supported the demonstrations against police brutality, but the looting was terrible,” Edge said, referring to protests after the killing of George Floyd. “It gave Trump and others an excuse to go after the demonstrators and ignore the real issue.”

“Antifa supporters and the leaders of Black Lives Matter groups promoted the looting and violence. They even said, ‘They’ve looted us for centuries, loot back,’” Galinsky noted.

Galinsky pointed to what Malcolm taught about the capacities of the exploited and oppressed to change our conditions and discover our worth.

Edge subscribed and bought a copy of Malcolm X, Black Liberation, and the Road to Workers Power by SWP National Secretary Jack Barnes.

Join in expanding the readership of the Militant! Introduce friends, relatives, neighbors and other working people to the paper and the party. Contribute to the fund. For more information, see the directory for the party unit nearest you, or contact the Militant at themilitant@mac.com.