“Workers control of production — I love that,” David Wilkerson told Rachele Fruit, Socialist Workers Party candidate for U.S. Senate from Georgia in the Jan. 5 runoff, after he started reading the party’s action program Nov. 21 on his doorstep in Dallas, Georgia.

Wilkerson, 25, who started working for Uber Eats when his acting jobs dried up at the start of the pandemic, subscribed to the Militant, bought two books by SWP leaders and other revolutionaries, and contributed $8 to the SWP Party-Building Fund.

Party members are completing an eight-week international drive to sell 1,200 Militant subscriptions, the same number of books and to raise $120,000 for the SWP’s annual Party-Building Fund. As the Militant goes to press, we are at 1,282 subscriptions, 1,255 books.

Every branch of the SWP and the Communist Leagues in Australia, Canada, New Zealand, and the United Kingdom report they have met or gone over their quotas. The fund is at $108,789 and also poised to go over, when final charts are published in next week’s paper.

“We point to the example of revolutionary Cuba,” Fruit told Wilkerson. “It’s a society based on human solidarity, not dog-eat-dog capitalism.”

She described the openings to build unions as workers fight to improve wages and working conditions.

“Going through working-class struggles,” Fruit said, “working people will develop the self-confidence and class-consciousness to form our own party and do what Cuban workers and farmers did. They took political power and ended the exploitation and oppression that comes from capitalism.”

“I visited Cuba with my family in 2016 for two weeks,” Wilkerson said. “It was eye opening. I felt like we had been lied to about Cuba and that America has a lot to learn from Cuba.”

“Workers in the U.S. can learn from Cuba,” Fruit said. “The ruling class has tried to overthrow the Cuban government for 60 years. In fact, they have been tightening the economic blockade severely over the past year.”

Fruit told Wilkerson about the two-week volunteer work brigades to Cuba where people from all over the world can learn about the Cuban Revolution. The brigades are organized by the Cuban Institute for Friendship with the Peoples.

“That sounds awesome,” he said. “Keep me informed.” The SWP is looking to help build the next brigade, sometime in 2021.

Interest in ‘The Jewish Question’

Alyson Kennedy and Hilda Cuzco met waiter Eliot Ovacik when they knocked on his door in East Dallas, Texas, Nov. 20. They showed him the new edition of The Jewish Question, written during World War II by Abram Leon, a leader of the communist movement in Belgium. Leon’s book gives a class analysis of why Jews have been targets of persecution since antiquity, and why the fight to eradicate Jew-hatred is bound up with the struggle to replace capitalist rule with workers power.

“Anti-Semitism is real,” Ovacik, son of a Jewish mother and Turkish father, told the SWP members, as he bought the book. “Six million died in the Holocaust. I’m tired of seeing things on the internet that talk about ‘the grand conspiracy of the Jews.’”

“You came all the way here from the Bay Area to talk to us about this?” Forrest Gardens, one of the leaders of the fight, asked SWP member Carole Lesnick.

“We think it’s important to let working people know about this example of people fighting back and reaching out for — and receiving — solidarity,” Lesnick said. Gardens subscribed to the Militant.

Party branches helped each other out to reinforce teams in cities where SWP members were fighting hard for their subscription and book quotas but could use a boost. 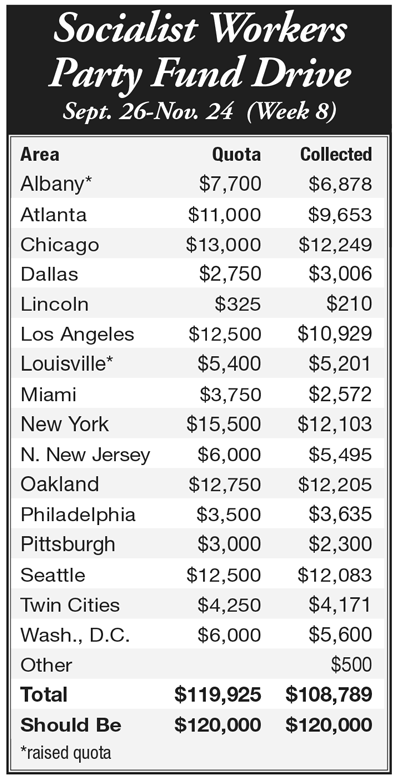 “In Miami, heavy storms for two weeks put a damper on getting out,” SWP branch organizer Anthony Dutrow told the Militant. “But we went out every day the last week and were joined by Markie Wilson from Atlanta.” That boost helped Miami meet all its quotas.

The response to the drive shows there are opportunities to broaden the number of people who know about and work with the party. Its action program, originally presented by party candidates during the 2020 election campaign, starts with immediate demands that workers and our unions can fight for today and advances a road forward to lead millions to fight to establish a workers and farmers government.

Members of the SWP are getting back to those who subscribed or bought books during the drive and finding out what they think about what they are reading. They are encouraging new readers to work with the party and join in bringing solidarity to union fights and other struggles in the interests of working people. They ask new readers if they have friends, relatives or coworkers who would be interested in learning about the party.

To help in this ongoing work, contact the party branch nearest you listed in the directory.