The Militant  extends a warm welcome to the 1,315 readers who subscribed to the paper during the fall drive carried out by the Socialist Workers Party in the U.S. and Communist Leagues in Australia, Canada, New Zealand and the United Kingdom! We had chosen higher quotas than before for this drive — as well as to sell an equal number of books by SWP and other revolutionary leaders — because of growing interest in a working-class road forward in today’s economic, social and health crisis. And we went over the top everywhere.

SWP members also raised $124,838 for the party’s annual fund drive, surpassing a more ambitious goal by almost $5,000. Every party branch met each of the quotas set during the drive in full and on time.

The drive coincided with the final months of the bold and effective Socialist Workers Party campaign of Alyson Kennedy and Malcolm Jarrett for president and vice president. SWP candidates and the Militant  campaigned for an action program of immediate demands needed for workers to fight the effects of today’s economic, political, health and moral crisis of the capitalist system. They took the discussion on these demands door to door in workers’ neighborhoods, on strike picket lines and factory gates and in Walmart parking lots.

SWP campaigners built and took part in social protest actions against police brutality, the bosses’ disdain for the health of hospital, packinghouse and other workers; and in solidarity with political struggles in Hong Kong, Nigeria, Belarus, West Papua and more. They visited farmers and farmworkers in California, Washington state, Florida, Georgia and Vermont.

The Socialist Workers Party Action Program (available on the Militant’s website) continues to be a powerful tool to unite workers resisting the bosses’ efforts to solve the crisis of capitalism, exacerbated by the COVID pandemic, on workers’ backs.

We offer a special welcome to the 44 workers behind bars who got or renewed their subscription. The Militant  defends the right of incarcerated workers to be treated like human beings, including having access to reading materials. The Militant  gets around in prisons because it tells the truth about capitalist exploitation and the capacity of working people to recognize their worth as they build a movement capable of ending the dictatorship of capital.

“I’m writing to thank you for the subscription to your paper,” a prisoner recently wrote. “I enjoy reading it and when I’m finished, I make it available to others.” The Militant  challenges every effort by prison authorities to try and bar the paper.

New readers hail from big and middle-size cities where SWP and Communist League branches are located, and from small towns such as Thomaston, Georgia; Madisonville, Kentucky; Rantoul, Illinois; and Lake Worth, Florida. Many learned about the Militant  when SWP members knocked on their doors. Others subscribed on the picket lines of the Teamsters strike against DSI Tunneling in Louisville; the United Food and Commercial Workers strike at the ReConserve animal feed plant in Chicago; the Confederation of National Trade Unions members locked out by Demix Beton in St-Hubert, Quebec, Canada; and other labor struggles. Some new readers are workmates of SWP members at Walmart stores, on the railroad and elsewhere. 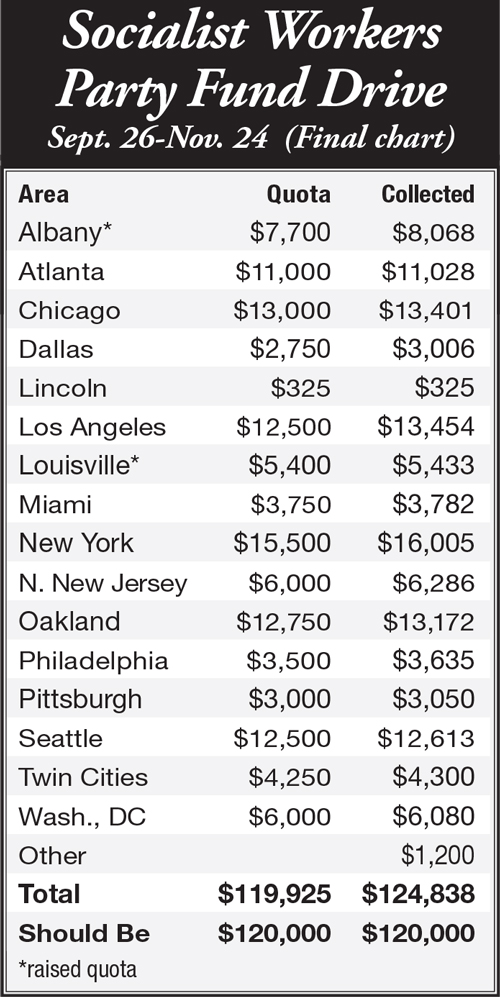 Today’s crisis of capitalism is causing many workers to want to learn about the roots of the attacks we face and the way forward. “It’s not a race thing, it’s a class thing,” Querry Howard, an African American package handler at UPS, told Zak Larrabee Nov. 21, as they discussed the fight against racism and police brutality at his door in Bardstown, Kentucky. “They use that to divide us, to keep the upper class in power.”

Workers often tell SWP members how much they appreciate the political discussions and the party’s program. “Nobody else is doing this,” highway construction worker Widmark Joseph told SWP campaigner Steve Warshell when he knocked on Joseph’s door in North Miami, Florida, in early November. “Certainly no other party is knocking on my door asking me what I think.” He gave $10 to the SWP Party-Building Fund “to encourage you to keep on campaigning.”

Warshell assured Joseph the SWP will keep on campaigning, raising the need for workers to build our own fighting political party, a labor party, and pointing to how the SWP sets an example with its own candidates. We say workers need to fight for workers control of production and safety on the job; for a massive government-funded public works jobs program to put millions to work at union-level pay; and for a shorter workweek with no cut in pay to prevent layoffs. The SWP will field candidates for governor, mayor and other offices in the upcoming 2021 elections.

Its members will take part in working-class resistance on the job and build solidarity for every strike we learn about. This is the road to build a fighting labor movement.

We will build demonstrations in December and beyond calling for an end to Washington’s brutal economic war against revolutionary Cuba. The Militant  explains that workers and farmers in Cuba, and the revolutionary government they forged, are an example for working people to emulate worldwide.

You can join the fight to defend and unite working people and to reach out broadly to workers, farmers and small proprietors. Contact the SWP branch nearest you listed in the directory.