After refusing for months to pass any relief measures for working people, Congress adopted a package of short-lived handouts to small-business owners, some government services and to some of the spiraling numbers of workers thrown out of their jobs.

The measures provide neither benefits for as long as workers need them, nor any steps to expand hiring. This guarantees that the burden of today’s economic, social and health crisis will continue falling heaviest on workers’ shoulders.

The package adopted Dec. 20 provides a one-time “stimulus” check for $600, and $300-a-week federal unemployment supplement to those who qualify for benefits, for up to 16 weeks only. Some 12 million working people were set to lose their benefits at the end of December. Millions of undocumented workers who are thrown out of work will go without any benefits. The relief package also includes copious subsidies to the owners of U.S. airlines and other bosses, dressed up as “payroll assistance.”

The moratorium on evictions, ignored in practice by many landlords, will be extended only until the end of January. Over 6 million adults could face eviction or foreclosure in coming months, according to a Census Bureau survey.

For the week ending Dec. 11, new jobless claims reached the highest level since September, with just under a million filing new claims, as government lockdowns force restaurants, bars and other small businesses to close. Millions are unemployed, and many more who’ve been without work for months are no longer even counted.

Cut workweek, with no cut in pay!

“Workers and our unions need to fight for unemployment benefits to all those thrown out of work, set at union scale and available for as long as workers need them, not one-time payments,” said Rachele Fruit, Socialist Workers Party candidate in the special Jan. 5 election for U.S. Senate from Georgia. 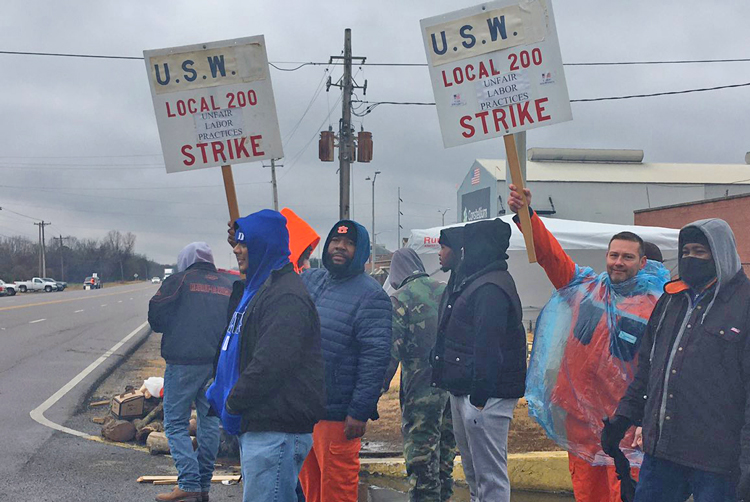 “My party says our unions need to fight for shortening the workweek with no cut in pay to prevent more layoffs,” Fruit said. “We call for a government-funded public works program at union scale to create millions of jobs building hospitals, schools, housing and other things workers need.

“Above all, workers need to be back at work,” Fruit said. “That is the one place where we can join together and stand up to the employers’ drive to make us pay for their crisis. This is the cornerstone for rebuilding the labor movement.

“Workers at Amazon’s Bessemer warehouse in Alabama are setting an example, fighting for better pay, working conditions and representation by the Retail, Wholesale and Department Store Union,” Fruit said. The National Labor Relations Board ruled Dec. 15 that workers there will hold a unionization vote.

“Their fight merits the backing of all workers,” she said. Establishing a union at Bessemer will boost the confidence of workers everywhere, including at Walmart, Amazon’s main competitor.

Unlike these giant retailers, who are raking in profits and have cornered even greater market share during the pandemic, small businesses are going under in record numbers. The government’s Paycheck Protection Program, resurrected in the new bill, is slated to make $285 billion in loans to small-business owners. But loans come due, and tens of thousands of restaurants and other small shops have already closed.

The pandemic continues to spread and hospitalization rates mount. People needing emergency care were shunted into tents at the Corona Regional Medical Center in Los Angeles, as the hospital’s emergency room is overflowing. For-profit health industry bosses did next to nothing to prepare for this inevitable second wave.

This has led to strikes and protests by nurses and other workers at hospitals across the country, including a one-day strike at Chicago’s Stroger Hospital of Cook County Dec. 22.

Nursing home bosses continue to pack residents into overcrowded and understaffed facilities. And they bar family members from coming to visit and help care for them. One report shows that 25% of all COVID deaths in New York in the five weeks leading up to Nov. 29 were in nursing homes, despite the fact that residents are less than 0.5% of the state’s population.

New York Gov. Andrew Cuomo’s response to rising hospitalization rates was to blame workers for not being careful enough and then threaten an even more restrictive shutdown of commerce, travel and jobs after Christmas.

The federal government is doing nothing to marshal its immense resources to accelerate production of the vaccines and distribute and dispense them. Instead, it’s relying on capitalist owners of the pharmaceutical industry, Walgreens, CVS, UPS and FedEx. The biggest medical supply middleman in the U.S., McKesson Corp., got the contract to move the Moderna vaccine. They take the vaccine from the for-profit producers to airport hubs for for-profit delivery by UPS and FedEx. For this, they get $746 million.

CVS and Walgreen bosses have been contracted to give the shots to staff and residents in the country’s nursing homes. But they don’t have nearly enough staff to do this. So, as the New York Times reported Dec. 22, they’re in a “hiring frenzy” to take on tens of thousands of new people with little experience.

In the first week of immunization only an estimated 128,000 people got the vaccine. The big majority of working people will wait many months.

The COVID-19 immunization program will be a windfall for the owners of the two main capitalist monopolies that manufacture these vaccines. Moderna bosses got billions in government research grants, while Pfizer benefited from massive advance orders. After haggling with authorities over the price of its vaccine, Pfizer may reap up to a 60% profit margin on each shot.

And these pharmaceutical monopolies are fighting to protect their patents. The World Trade Organization put off until March discussion on proposals from the Indian and South African governments to allow production of generic versions of the vaccine.

The dog-eat-dog capitalist system is the root of the crisis working people face today.

For the past few months thousands of workers at state-owned iron ore, coal and uranium mines in Ukraine have been involved in a series of protests, including strikes, work-to-rule actions and underground sit-ins, over nonpayment of months of wages and…

Some 100 Moroccan workers ended a 10-day underground occupation at the Jebel Aouam mine near M’rirt in Khenifra province Dec. 21 after Touissit Mining bosses agreed to rejoin talks on improving workers’ wages and conditions. The sit-in, backed by another…

Workers protest all across Iraq, demand back pay, jobs

Following days of protests across Iraqi Kurdistan by public sector workers demanding back pay, jobs, public services and an end to corruption, thousands more working people took to the streets of Basra and Baghdad to demand a halt to Iraqi…

Ala. Amazon workers win right to vote to have a union

ATLANTA — Despite objections from Amazon, the National Labor Relations Board ruled Dec. 16 that workers at Amazon’s warehouse and distribution center in Bessemer, Alabama, have shown enough support for the Retail, Wholesale and Department Store Union to hold a…