The international Militant subscription renewal drive is giving a boost to Socialist Workers Party election campaigns that have been announced in six states with more to come. At the center of the Jan. 1 to Feb. 15 drive is getting together with readers to discuss the challenges working people face and a road forward to defend our interests amid the deepening capitalist crisis.

In California the fight for ballot status for SWP candidates Eleanor García for U.S. Senate and Joel Britton for governor is underway. García and Britton explain why working people need our own party, a labor party, based on fighting unions that stand up to the bosses’ attempts to gut our wages and working conditions. It would put forward our own foreign policy, one that starts from solidarity with working people around the world and defends the sovereignty of oppressed nations such as Ukraine.

Readers of the socialist newsweekly can help petition to get party candidates on the ballot, join them in bringing solidarity to strike picket lines and participate with them in protests in the interests of working people. They can organize house meetings to introduce the campaign to friends, relatives and neighbors or get invitations for candidates to speak to their unions, churches and community groups.

With two weeks of the drive to go, 260 readers have renewed out of the goal of 300. Going over the goal is in sight, expanding the long-term readership of the paper.

Bill Arth in Los Angeles said one subscriber he talked to this week “renewed his subscription for a year and signed to put García on the ballot.” The two SWP candidates will be leading a weekend of campaigning in the Oakland area Feb. 5 and 6.

John Benson and Susan LaMont visited subscriber Devin Anderson at his home in Atlanta Jan. 29. Anderson is 34 years old, a photographer and videographer whose family is originally from Jamaica.

He subscribed a few months ago when Militant supporter Mike Najim knocked on his door. “Mike told me that the Militant was for workers, so I subscribed to support what you’re doing,” Anderson said. “I can tell you’re a grassroots organization, because you’re here, knocking on people’s doors and we’re talking.” 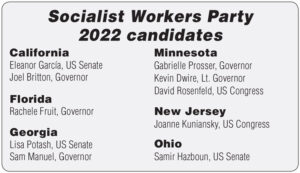 They discussed the origins and development of class society and how capitalism was an advance from feudalism but has exhausted its progressive role and now threatens humanity’s future.

The book explains that slave and feudal societies were also class divided. Capitalism developed the productive forces and created its own gravediggers, the working class, who fight for democratic rights that are needed to challenge the domination of the ruling class.

“If capitalism was progressive,” Anderson said, “I can’t see that people are morally better than before, if you look around and see all the violence and other problems we face.”

“Capitalism promotes dog-eat-dog relations, including among workers,” Benson said. “When we start to fight together, in our interests, that begins to change.

“The civil rights movement is a great example of that,” Benson added. “The young people and workers who became the leadership and backbone of the movement fought with courage and discipline and became different people. Workers involved in the labor strikes this past year are starting to learn what it means to fight together.”

Anderson said he opposes views that whites are to blame for the conditions Blacks have faced, including slavery. Such ideas are advanced by privileged layers in the meritocracy under the banner of “Critical Race Theory.”

“The common white man did not enslave us. It was the slave-owning aristocracy,” Anderson said. He also agrees with the SWP in rejecting the view that there’s a serious effort to re-impose Jim Crow segregation in the South today, as Democrats demagogically claim. The character of chattel slavery in the U.S., the revolutionary war that uprooted it and the fight to end racist oppression are all addressed in the book.

“Malcolm X held the view that racist oppression couldn’t be eliminated by reforming capitalism, that it would take a revolution,” Benson said.

Anderson asked Benson and LaMont to come back again to talk more about Malcolm X. They’ll encourage him to join in campaigning for the SWP candidates in Georgia,  Sam Manuel for governor and Lisa Potash for U.S. Senate.

End US economic war on Cuba

Several of the party’s recently announced candidates joined Jan. 30 protests against the U.S. economic war on Cuba around the country. Rachele Fruit, SWP candidate for governor of Florida, joined the action in Miami. “We explained that the working class needs to organize to take political power like the Cuban workers and farmers did,” she said. Gabrielle Prosser, SWP candidate for governor of Minnesota, joined 35 people at a car caravan in Minneapolis protesting the U.S. rulers’ embargo.

Want to help campaign or introduce friends, co-workers, neighbors and relatives to the Militant and the Socialist Workers Party candidates? See the party branch nearest you, or contact themilitant@mac.com.

Recent enhancements to the website of Pathfinder Press — www.pathfinderpress.com — make it easier for working people and youth to find their way to books presenting the lessons of 175 years of revolutionary working-class struggle, through the eyes of participants,…