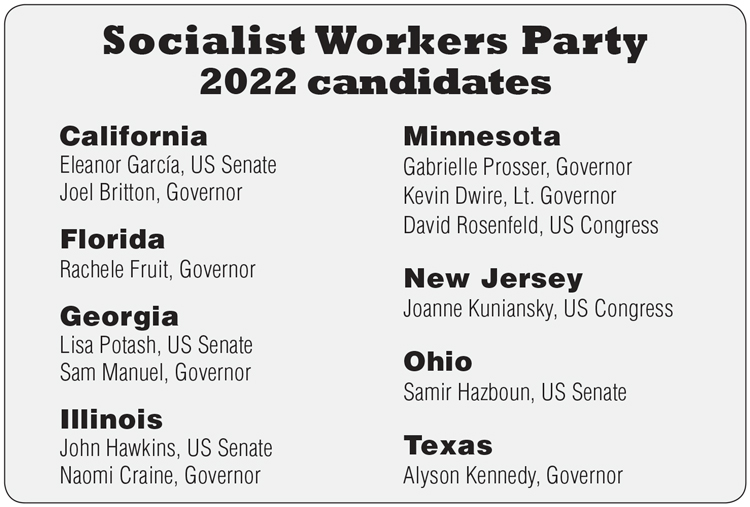 OAKLAND, Calif. — More than 300 people, way over the 65 required, have signed the petition to put Eleanor García, Socialist Workers Party candidate for U.S. Senate, on the California ballot. In addition, over $5,000 has been raised to pay the filing fee.

Over the weekend of Feb. 5-6, campaigners fanned out to cities in the Bay Area and southern California, knocking on doors and setting up tables at supermarkets, introducing the party’s program and the Militant. Supporters of the campaign from Seattle, Los Angeles, and Albuquerque, New Mexico, traveled here to participate.

“I like what you are doing,” Jose Cabrera told García when she and fellow campaigners stopped by his home in Antioch. “The capitalist class and the two parties that govern on its behalf are in deep crisis,” the SWP candidate told him. “The root cause is their economic crisis, worldwide stagnation and now inflation. They respond by attacking workers’ wages, our conditions of work and life, our ability to raise a family. Our party says workers need to get organized independently of these parties. We need our own party, a labor party.”

Cabrera, a retired chef and proud member of the UNITE HERE hotel workers union, worked for many years at an exclusive ruling-class club. “They wouldn’t let women into their club as members,” he said. “Our union fought to give women the right to work at the club and we won that. I like what you said about workers getting together. We are the soldiers!”

Cabrera signed the petition, subscribed to the Militant, and purchased a copy of Are They Rich Because They’re Smart?  by Socialist Workers Party National Secretary Jack Barnes.

García also met with Leilani Williams, a medical assistant who subscribed to the Militant  while picketing at the Oakland Kaiser hospital in November in support of striking members of the Stationary Engineers union.

“I’m against the mandates on vaccinations,” Williams told her. “I took the first two, but I’m not sure about the booster.” García responded that the Socialist Workers Party supports vaccination, but opposes government mandates, which reinforce the capitalist rulers’ power to interfere with our rights and our struggles. “The vaccines are effective,” she said. “Unions should take the lead in educating about this and organizing to get workers vaccinated. But the bosses shouldn’t have the power to fire you because you are hesitant to get vaccinated.”

García said Cuba is an example of what happens when medical care is not a business, based on what is profitable. “They have produced their own vaccine and people there are getting vaccinated because they trust their government, unlike here. The workers and farmers in Cuba made a socialist revolution, replacing domination of the island by the U.S. and the Cuban capitalists.”

Williams signed the petition, decided to renew her subscription to the Militant  and got Malcolm X, Black Liberation, and the Road to Workers Power.

Joel Britton, Socialist Workers Party candidate for governor, spoke with Rose Cruz at her home in Vallejo. Cruz, a hospital worker and member of the Service Employees International Union, was a staunch supporter of the engineers’ strike and a regular on the picket line outside the Vallejo Kaiser hospital.

Cruz signed the petition and purchased Teamster Rebellion, a book that describes how workers built the unions into class-struggle organizations in the 1930s.

While in Vallejo, campaigners visited with Clista Hammond, a Militant  subscriber, retired teacher and former shipyard worker. She said that in the 1950s, Blacks were prevented from buying homes in Vallejo. The KKK carried out terrorist attacks. As a result of the deep-going changes brought about by the Black struggles of the 1960s and ’70s that overthrew Jim Crow segregation, Vallejo is now home to Blacks, Latinos, Caucasians and others.

Campaign supporter Vincent Auger told Hammond, “I started reading the Militant  about a year ago. The campaign program is consistent and clear. It’s about what working people ourselves can do, not rely on others. This resonates with people.”

Auger said he recently joined picket lines of striking workers at the King Soopers groceries in Colorado. “They were fighting for higher wages and against the company consolidating jobs, overworking employees so the bosses can make more profits.”

“And if they don’t give them a 40-hour workweek, the company doesn’t have to pay benefits,” Hammond added.

As part of the campaign weekend, García and Britton were featured speakers at an SWP forum in Oakland Feb. 5. “I want you to go away from this meeting recognizing two things,” García said. “The first is the depth of the political crisis faced by the capitalist ruling families and the parties that represent them. The root cause is their profit-driven system, the stagnation of production and trade, along with soaring prices. It’s a worldwide crisis.

“They respond by protecting their markets and profits, making the workers pay for their crisis. Internationally the imperialist rulers are demanding debt repayment from regimes in the semicolonial world. This means governments there will squeeze our fellow workers and farmers. This adds to crushing conditions they already face, made worse by the continued spread of the coronavirus and hoarding of the vaccines by the imperialist powers.

“The second thing is the ruling-class parties are incapable of putting together a stable majority to effectively govern on behalf of their class,” she said. “Neither party has solutions. They are locked in never-ending battles for control, both torn by internal dissent.

“It’s harder and harder for young workers to move from their parents’ homes, to start families,” García added. “This is a big question for strikers who make ice cream cakes at Jon Donaire in Los Angeles, the majority women. No family time is one of the reasons they went on strike, because of unscheduled, last-minute overtime. For these women it’s not only children but also elderly relatives they are responsible for.

“The Socialist Workers Party champions the battle for the emancipation of women, key to strengthening the fighting capacity of the working class.

“Workers need a government-funded public works program to provide jobs at union-scale wages to build affordable housing, child care centers, hospitals and other things working-class families need to survive,” she said. “And we need to conquer workers control over production.”

The socialist campaign will address the plight of farmers, including the working farmers in the San Joaquin Valley who can’t get access to water, as well as debt-ridden ranchers losing their land, García said. “We look to examples from the 1980s, when fighting alliances were formed between Black and Caucasian farmers, and with the unions.”

Britton said that supporters of the campaign have recently participated in protests by refinery workers against the contract the oil bosses look to impose on their union, the United Steelworkers. “Short staffing and excessive overtime, these are key issues they are fighting about,” he said.

Readers of the Militant  are urged to join the SWP campaign, in California and across the country! For information on how to do this, contact the Socialist Workers Party campaign center nearest you, listed in the directory.

Deborah Liatos contributed to this article.

With one week left, ‘Militant’ renewal drive is over the top

As we go into the final week of the international drive to expand the long-term readership of the Militant, supporters worldwide are poised to meet and exceed their goals. Overall, we’re already over the top, winning 310 renewals, 10 over…