In response to Moscow’s invasion of Ukraine, the Militant has launched a timely and needed international drive to expand the reach of the paper, win 1,600 new subscribers, sell 1,600 books by Socialist Workers Party and other revolutionary leaders presenting a communist program and marking the lessons from past working-class struggles, and to raise $165,000 for a Militant Fighting Fund for the paper. The campaign is already off and running and goes through May 17. We’re asking our readers to join in!

In response to the first major war on the European continent in decades, with consequences for the toilers worldwide, the Socialist Workers Party campaigning with the Militant demands: Defend the independence of Ukraine! Moscow out now! Washington out of Europe! 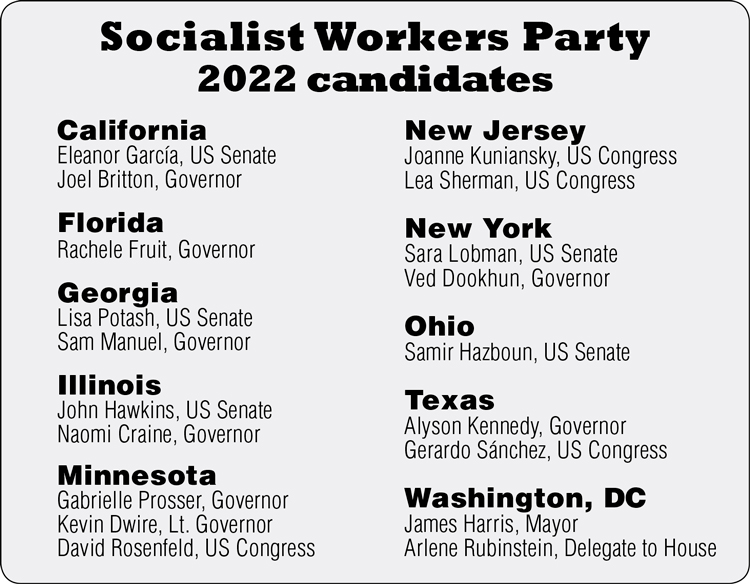 The drive includes higher goals than the one organized last fall — in response to the war, the number of working-class battles worldwide and new opportunities to reach working people with the activities and program of the SWP presenting the road forward for working people.

There’s an increased receptivity to communist politics by growing numbers of workers around the world. This is seen among those involved in strike battles of coal miners, bakery workers and others for better pay and working conditions; protests by truckers to defend their living standard and rights; and the struggle for women’s emancipation and fight for jobs and social conditions that make it possible for working people to raise a family.

Distribution of the Militant and books by leaders of the Socialist Workers Party and other revolutionary leaders is an indispensable part of the SWP’s mass work — organizing, explaining and educating as part of taking part in the class struggles and social protests taking place across the globe, broadening solidarity and explaining the need for the working class to chart a course to take political power into its own hands.

A key part of this is telling the truth about the socialist revolution made by Cuba’s workers and farmers and the Marxist leadership of Fidel Castro and the July 26 Movement that were essential. The SWP is organizing to take part in the upcoming Havana International Book Fair — presenting panels on Pathfinder’s new titles, Labor, Nature, and the Evolution of Humanity and The Jewish Question. This will be followed by joining in the powerful May Day workers’ march and related conferences and other gatherings in solidarity with Cuba’s revolution.

As part of these efforts, the drive features a 20% discount on the hundreds of titles published by Pathfinder and a special offer on nine books sold along with subscriptions. (See ad on page 6.)

The SWP and Communist League 2022 candidates and campaigns now underway will help advance this international drive, explaining what the party is doing and presenting the party’s program.

A key part of the spring drives is raising $165,000 for the Militant Fighting Fund. Workers’ contributions are the foundation of the finances of the paper, and they have been growing.

A note recently received from SWP member Dan Fein in Chicago about response to the Militant shows the openings. “We sold out our bundle plus a couple of subscriptions at the Feb. 27 Ukraine demonstration in Chicago!” he wrote. “Please send us more papers to get us through the week, which includes a visit to the striking Machinists’ picket line in Davenport, Iowa.”

The Militant will feature weekly coverage of the drive, including charts reporting on progress. Please send reports and photos to the Militant.

To join us in the effort, to invite a party representative to come meet with you, your friends, co-workers and others, to make a contribution to the Militant Fighting Fund, contact the party or Communist League branch nearest you.

Defend Ukraine’s independence!
For defeat of Moscow’s invasion!
US troops, nuclear arms out of Europe, all of Europe!

The following statement was issued March 3 by Jack Barnes, national secretary of the Socialist Workers Party, on behalf of the SWP National Committee. The Vladimir Putin regime in Russia has unleashed a murderous war, including massive bombardment of civilian-occupied…

Unleashing a deadly bombardment on Ukrainian urban centers, the regime of Russian President Vladimir Putin is slaughtering thousands. Overwhelmingly outgunned and outmanned, Ukrainian troops and civilians are mounting courageous and tenacious resistance that has so far prevented Moscow’s forces from…

NEW YORK — “Tens of thousands of workers and others in Ukraine are throwing themselves into defending the sovereignty of their country. They are putting up a fierce resistance, against a murderous invasion by Vladimir Putin’s regime in Russia aimed…

Tens of thousands of people worldwide have taken to the streets demanding Moscow get its troops out of Ukraine. This includes protests in Russia and countries like Belarus, where the government provided a platform for the Russian rulers’ assault on…

‘We’ve entered an era of instability, economic crises and wars’

To help explain what led to Moscow’s invasion of Ukraine, this special feature has excerpts from “Their Transformation and Ours,” a Socialist Workers Party resolution adopted in 2005 and “Capitalism’s Long Hot Winter Has Begun.” Both articles appear in New…