“I was thinking about leasing a truck, but now I won’t because of the costs of fuel and other things,” trucker Richard Swim, 24, told Alyson Kennedy, Socialist Workers Party candidate for governor of Texas, while she was campaigning at a truck stop in Weatherford, Texas, March 29.

He told Kennedy he filled up his rig in Oklahoma recently and it cost $645. “I owned a truck, but had to get rid of it when COVID hit and the price of freight went down,” he said.

Kennedy pointed to the convoy of truckers in Washington, D.C., protesting attacks on their livelihoods and the yearlong strike by the United Mine Workers at Warrior Met in Alabama to reverse pay cuts and other concessions forced on them in 2016. “These examples of working people standing up to bosses and the government are so important,” she said.

“What we need is our own party, a labor party to help organize working people to fight and to back struggles of workers and farmers in other countries — including Ukrainians fighting to defeat Moscow’s invasion of their country and for national sovereignty.”

Kennedy showed him photographs in Teamster Rebellion, a book by SWP leader Farrell Dobbs, which show “the battles of coal haulers in the 1930s to win a union and a contract that led to organizing over-the-road drivers in 11 states into the Teamsters union.” Swim bought the book, a Militant subscription, and contributed $5 to the Militant Fighting Fund.

In visits to several truck stops, SWP members in Dallas-Ft. Worth have sold 13 subscriptions, 55 copies of the paper, 13 books by Dobbs and other SWP leaders and revolutionaries from around the world, and received $51 in contributions to the Militant Fighting Fund.

Discussions with workers that party members meet going door to door and at strike picket lines and other actions to defend working-class interests are at the heart of the international propaganda campaign by the SWP and Communist Leagues in Australia, Canada, New Zealand and the U.K. The goal is to win 1,600 new readers to the Militant and get out a similar number of books that draw out lessons from past working-class battles crucial to building the party workers need today.

The drive includes raising $165,000 in the working class for the Militant Fighting Fund. Party members are getting a strong response. Hundreds of dollars have been contributed by workers who agree it’s important for the Militant to get as wide a circulation as possible.

Knocking on doors in Patterson, a city in California’s Central Valley, Joel Britton, SWP candidate for governor of California, met Maria Chapa April 2. She works in the tomato fields and as a home health care worker who is a member of the Service Employees International Union. She welcomed the party’s call for working people to organize independently of the Republican and Democratic parties and wanted to discuss the situation facing immigrant workers.

At a nearby nut processing plant “the company takes advantage of immigrants,” Chapa said. “They treat them terribly. They divide the workers and keep the union out.”

Reaching out to farmworkers

“The unions need to fight for amnesty for all immigrant workers here without papers,” Britton said. “This is in the interests of all workers, to unite us.”

Mexico, workers are facing the same problems,” she said. “Don’t you think instead of so many coming to the U.S. they need to fight for unions and a change in Mexico?”

“The answer is for all workers to organize. Workers are an international class with common interests in our fights against exploitation, oppression and wars, like the one in Ukraine,” Britton said.

Chapa signed up for a Militant subscription and purchased Labor, Nature, and the Evolution of Humanity and In Defense of the US Working Class.

“We should be doing a lot more for them,” Woodward said.

“Yes, the working class needs to support the fight to defeat the invasion,” Wils said, “but we don’t give any support to what the British government does, like the sanctions on Russia.”

Woodward agreed. “These sanctions hurt everyone,” she said. She and Arnaouti own a fish and chip shop. He explained that a lot of fish sold in British cafes is bought from Russia and sanctions have pushed the price up. “I used to buy a box for 130 pounds” ($170), he said, “but it has doubled over the past two months.” They subscribed to the Militant.

To join the campaign to expand the reach of the Militant, contact the SWP nearest you. To contribute to the Militant Fighting Fund, make out checks to the Militant and send to 306 W. 37th St. 13th floor, New York, NY 10018, or donate online at www.themilitant.com.

Betsey Stone in Oakland, California, contributed to this article. 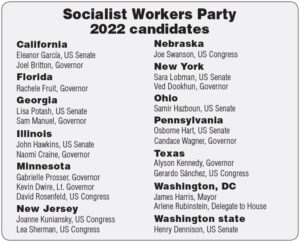