Socialist Workers Party members are discussing the roots of the capitalist crises working people face today and what we can do together to defend ourselves. As they present the party’s program widely among workers and farmers they’re getting a good response, including from rail workers confronting bosses’ attacks on wages and conditions.

The article “Rail workers resist gov’t, boss attacks on safety, pay” in last week’s issue of the Militant and the paper’s report on the strike of 40,000 rail workers in the United Kingdom got the attention of rail workers in Oakland, California, July 4.

Joel Britton, Socialist Workers Party candidate for governor of California, reports that Amtrak rail mechanics he spoke with at an afternoon shift change were drawn to the front-page photo showing a freight train derailment in Texas and pointing to an Amtrak derailment in Missouri that killed four people and injured 150.

“Safe railroad operations have to be fought for, especially by our unions,” Britton said to one worker who pulled out a $5 bill for a copy of the paper and told Britton to keep the change. 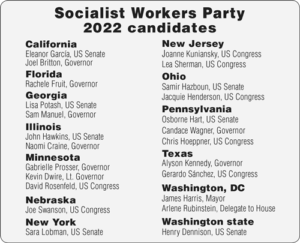 Britton and party member Jeff Powers also visited the BNSF rail yard in the Port of Oakland. An engineer who got a Militant subscription from Powers in the spring said he found the paper “too militant” and declined to renew. But he did want to talk about how working conditions are getting worse and worse, as the rail bosses get richer and richer. Powers said he and Britton would be back for more discussion. All told, 10 rail workers got copies of the socialist newsweekly.

At Penn Station in New York, party members sold five copies of the Militant and a subscription on July 3. “An Amtrak station maintenance worker took a look at the Militant and readily agreed that the companies don’t care about the lives of rail workers, just their profits. He got the subscription and bought two copies of the paper to give to other workers he knows,” reports SWP member Seth Galinsky.

One worker took a flyer for the campaign of Sara Lobman, SWP candidate for U.S. Senate. He said he would post it on the bulletin board in the break room. A member of Service Employees International Union Local 32BJ, who works maintaining the station, told campaigners they should come back to talk with more rail workers.

Final preparations are being set for the stepped-up three-week effort to place Chris Hoeppner, Socialist Workers Party candidate for U.S. Congress from Pennsylvania, on the ballot. The goal is to collect 2,000 signatures, twice as many as required, in the Philadelphia area July 9-31 as part of introducing working people to the party’s program. A July 9 Militant Labor Forum with John Studer, the party’s national campaign director, will launch the three-week effort.

This will be the first time in decades the SWP will have ballot status for federal office in Pennsylvania. The campaigning effort is already off to a good start with 332 signatures collected, and 15 subscriptions and 18 books sold.

The party in Pennsylvania is also running Candace Wagner for governor and Osborne Hart for U.S. Senate.

Party members and supporters are also involved in a five-week international effort June 25-Aug. 2 to win 300 of those who subscribed to the Militant this spring to become long-term readers of the paper. The drive includes selling 300 books on lessons of working-class and revolutionary struggles to renewing subscribers.

“I’m renewing my subscription because the media has other interests,” Canadian National rail conductor Alexandre Jacob told Communist League member Katy LeRougetel after attending a June 29 barbecue and rally backing unionists on strike at Rolls-Royce in Montreal. “They don’t talk about workers, and it’s important to get out this kind of news.”

“I appreciate the coverage you shine on Cuba,” wrote a prisoner in California along with his renewal. “Reading the Militant has educated me so much on socialism.”

So far 13 renewals have been mailed in from readers behind bars. Over the last two years the number of prisoners who have subscribed has reached 194, the highest number in more than a decade, as more inmates tell fellow prisoners about the paper.

Among workers who signed up for a renewal in Texas was Harmon Dent, a retired member of the United Steelworkers union in Beaumont who had worked at the ExxonMobil oil refinery.

He told the Militant  that he liked the breadth of the paper’s coverage of labor struggles. “The reporting on the Canadian truckers and the U.S. truckers convoy was important for all workers to know about,” he said. “You can still read the paper at the Steelworkers’ hall in Beaumont.”

Dent helped win support for the Steelworkers locked out by refinery bosses for 10 months beginning in May 2021 for refusing to accept a union-gutting contract. He purchased Labor, Nature, and the Evolution of Humanity.

To join the Militant renewal campaign and the effort to get the SWP on the ballot in Pennsylvania, contact the nearest campaign office.

The working class needs to carry out its own foreign policy

The following statement was released July 6 by Chris Hoeppner, Socialist Workers Party candidate for U.S. Congress from Pennsylvania.  The working class needs its own foreign policy — in sharp counterposition to that of the profit-driven imperialist U.S. rulers —…