As they campaign on workers’ doorsteps in big and small cities and rural areas across the country, Socialist Workers Party candidates and their supporters discuss why a class-struggle road forward is necessary in face of the attacks today from the crisis-ridden capitalist system.

Campaigning like this — on the porches and doorsteps of workers and farmers — is the foundation of the SWP’s work. This is where party members and supporters can engage and contest the political issues and battles facing workers today. From this position, the party can best respond to developments in the class struggle, on the job and in social protest actions.

The SWP explains that to defend the working class the labor movement needs to chart a course to unify millions of toilers in independent political action. And party members explain that taking part in that struggle will change workers, as they gain confidence and deepening class consciousness that they are capable of taking political power out of the hands of the capitalist rulers.

“I view lack of medical care as one of the biggest problems we face, it’s all about the money,” Jesse Bridges, a worker in a paper-cutting factory in Kankakee, south of Chicago, told Dan Fein July 29.

“We don’t have health care, we have capitalist for-profit health insurance,” said Fein, the SWP candidate for governor of Illinois. “And many of us don’t even have that. We need to fight for government-funded health care for all.”

Rising premiums and deductibles coupled with limits to what insurance covers leave a growing number of workers in deadly fear of getting sick, because they simply cannot afford it.

Bridges signed up for a subscription to the party’s paper, the Militant,and decided to get Are They Rich Because They’re Smart?  by SWP National Secretary Jack Barnes, one of the books campaigners promote.

Four workers in Kankakee got subscriptions and 10 picked up single copies, two got  Are They Rich Because They’re Smart?  and one purchased Is Socialist Revolution in the US Possible?  by SWP leader Mary-Alice Waters, another of the campaign books. (See ad below.)

“There are big and accelerating changes taking place, as the capitalists’ ‘world order’ is coming apart, from Korea to the Middle East to Russia,” Fein said. “In workers’ apartments and homes we have the time to discuss these shifts, and how they are moving in a direction that is good for the working class.”

In recent months Fein built support for Teamster delivery drivers on strike at the American Bottling Company in Northlake, Illinois. He raised the need for solidarity as he knocked on doors throughout the area, urging workers to join him in going out to the picket line.

Building the labor movement, he explained, is key to advancing workers’ ability to defend themselves. After 40 days on strike workers ratified a contract July 1, winning a raise of $3.40 an hour over four years.

The working class needs government-funded health care for everyone, Fein said. If we all try to get by on our own, based on a deal with our one boss, it’s a trap. And it leaves out the tens of millions that don’t have a union. Health care, like retirement, is a social right.

A powerful working-class-led social struggle can win government-funded health care and also help forge the class solidarity and unity working people need to fight the competition among workers fostered by the capitalist system.

Steve Warshell, SWP candidate for U.S. Senate from Florida, kicked off his campaign going door to door in Homestead July 21 to talk about how the fight for amnesty for all 11 million workers in the U.S. without what the government considers “proper documentation” fits in to strengthening the working class as a whole. A detention center for immigrant children there has been in the public spotlight recently.

‘Amnesty for immigrants in U.S.!’

“The SWP calls for amnesty,” Warshell said. “This is essential to unite the working class against boss attempts to divide us and drive down wages and working conditions for all. We face sustained attacks from the bosses and their government because their capitalist system is in crisis.”

SWP member Cindy Jaquith, who campaigned with Warshell, reports that his call for the labor movement to come together and fight for amnesty got mixed reactions.

“A worker from the Virgin Islands said he sympathized with some aspects of the government’s immigration policy. But he liked the idea of a worker running for office. He said he works for an anti-union company, Frito-Lay.”

An auto mechanic Warshell talked to embraced the idea of fighting for amnesty. He said he has several friends who don’t have papers.

“More and more workers are open to fight for amnesty,” Warshell said. “The longer we live and work side by side, and face attacks by the bosses side by side, barriers break down. There is less anti-immigrant prejudice today.”

Both workers got copies of  Are They Rich Because They’re Smart? 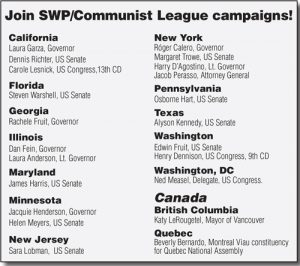 Rachele Fruit, SWP candidate for governor of Georgia, campaigned door to door in Lithia Springs July 28. She met warehouse workers and friends Ashton Tuck and Fred Cooper, who both decided to get a Militant subscription to follow the socialist campaign. When Fruit showed them The Clintons’ Anti-Working-Class Record: Why Washington Fears Working People  by Barnes, they were attracted to a cartoon depicting two lawn signs in the 2016 election, one saying “She’s worse” and the other “He’s worse.”

Fruit was one of 74 participants from the U.S. in this year’s 300-strong International May Day Brigade to Cuba. Brigade members spent two weeks talking to workers, farmers and youth, doing voluntary agricultural work, and joining the massive May Day march celebrating Cuba’s socialist revolution.

The Cuban Revolution is an example for working people in the U.S., she explains. It showed that workers and farmers are capable of coming together against seemingly impossible odds, and, with leadership like the Cubans got from Fidel Castro, defeating the U.S.-backed dictatorship there and taking political power into their own hands. “That’s what we need to do here,” she said. To get involved in the campaign, contact the SWP branch nearest you, listed in the directory.

The following statement is from John Studer, chairman of the Socialist Workers Party National Campaign Committee. Efforts by the Donald Trump administration to open negotiations with the governments of North Korea, Russia, Iran, China and the Taliban in Afghanistan are…