The Militant  urges readers to join in winning support for the newspaper’s fight to overturn a ban imposed on the paper to a subscriber at the Federal Bureau of Prisons’ medium security facility in Greenville, Illinois.

Warden Tom Werlich justified the ban in his July 12 rejection of the Militant, saying the paper “is a newsweekly journal associated with the Socialist Workers Party and encourages change by protesting and striking. Such publication can encourage inmates to protest and conduct work strikes which become a institution security matter.”

“Banning the Militant  because it covers the views and activities of the Socialist Workers Party and its candidates is an unconstitutional attack on political rights and freedom of the press,” said Militant  editor John Studer. “It can set a dangerous precedent for broader prison censorship of the Militant  and other publications with points of view any warden disagrees with throughout the entire prison system.”

“The Militant  has been delivered to all its subscribers in federal prisons since at least the 1950s,” Goldstein noted, except once, and that was overturned on appeal. “The ban must be reversed and the rejected issues delivered to the inmate subscriber.”

Organizations and individuals concerned about freedom of speech and the rights of workers behind bars have been writing to Federal Bureau of Prisons Regional Director Sara M. Revell asking for the ban to be reversed. 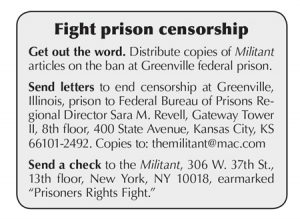 “This misguided action strikes at the heart of fundamental rights of Americans,” wrote Bruce Levine, professor of history at the University of Illinois at Urbana-Champaign Aug. 12, “rights that in truth should be enjoyed by all human beings. To suppress this one periodical constitutes a danger to anyone who cares about freedom of thought, inquiry and expression.”

Fred Whitehead, an author and historian from Kansas City, Kansas, wrote to express, “my severe condemnation for the recent banning of the Militant.” He added, “Prisoners are still citizens and should receive the benefit of freedom of the press.”

Among those who have spoken out against prison censorship of the Militant  are the American Civil Liberties Union, National Lawyers Guild, Amnesty International, PEN America, other newspapers and prisoner rights, church and other groups.

While the Illinois anti-censorship fight unfolds, the Militant  is also dealing with prison officials’ impounding the paper from subscribers in Florida.

“Florida prison officials must think that sooner or later we’ll get tired of fighting censorship, but we won’t,” Studer said after receiving notices Aug. 7 from a subscriber at the Florida State Penitentiary in Raiford.

Ironically, the July 9 and July 16 issues were banned, according to the warden there, because they reported on the Militant’s ongoing fight against censorship in Florida state prisons!

This, the impoundment notice claims, “presents a threat to the security, good order or discipline of the correctional system or the safety of any person.”

The July 30 issue cites as the reason for rejection “Page 2-3” with no indication which articles or content requires impoundment. The articles on these two pages include “Ukraine Miners’ Strikes, Protests Win Back Wages” and “Books by SWP Leaders Perk Interest at Librarians’ Meet,” as well as coverage of a salt miners strike in Ontario, Canada, and a July 12 rally in Columbus, Ohio, by thousands of miners, Teamsters and other unionists protesting pension cuts.

But authorities there never informed the Militant  about the impoundment, as they are required to do by state prison regulations. The paper found out from one of its subscribers who had his papers taken.

“Florida regulations require that a Correctional Institution must provide written notice to both the inmate and the publisher,” Goldstein wrote in a letter to Warden Barry Redish Aug. 7. The Militant  has appealed to the Department of Corrections Literature Review Committee over every such impoundment in the state, with the vast majority overturned.