A Militant subscriber at the Greenville, Illinois, federal prison won a victory there Aug. 15 — he was released. The fight against the prison warden’s decision to ban the paper while he was there remains undecided. This is an important issue for all workers behind bars and all defenders of political rights. At issue is whether prison authorities have the right to censor publications they don’t agree with.

Warden Tom Werlich banned the paper on the grounds that it “is a newspaper journal associated with the Socialist Workers Party and encourages change by protesting and striking.” 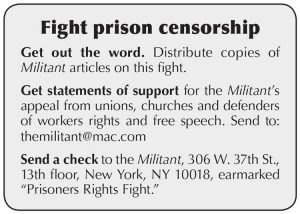 Letters are still being sent to Federal Bureau of Prisons Regional Director Sara M. Revell, urging she rule that this censorship must be overturned. One subscriber who wrote Revell is an inmate at the Illinois state Lawrence Correctional Center in Sumner. “It would seem to me that the Bureau would be encouraging its prisoners to utilize those principles which are set forth in the Constitution, allowing all citizens to seek redress for grievances through peaceful endeavors,” George Peter Jr. wrote. “I therefore respectfully request that you reexamine the Bureau’s decision to ban the Militant.”

He sent the Militant a copy of his letter, along with a note saying that he has continued to get the paper since he was recently transferred to Lawrence.

“As a former U.S. Navy veteran, concerned citizen, and college professor,” writes Dr. Zoe Franklin from Chicago, “it is my view that there is no legitimate reason for the Militant newspaper to be banned from the Greenville, Illinois, prison other than to prevent inmates from access to First Amendment rights.”

Meanwhile, prison authorities in Florida continue to ban issues of the Militant, either because they have ongoing coverage on the fight against censorship in Florida state prisons, or without giving any reason — which they are required to do under state regulations.

The latest includes  banning  five issues in a row — July 9 (no. 25) to Aug. 6 (no. 29). Prison authorities at the Florida State Prison and Tomoka Correctional Institution did so without sending notices to the Militant informing them about the impoundments.

The Militant found out about the censorship from inmate subscribers or the chair of the Department of Corrections Literature Review Committee.

After receiving inquiries and protests, the committee reversed almost all of these bannings, said Militant attorney David Goldstein, of the prominent civil liberties law firm Rabinowitz, Boudin, Standard, Krinsky and Lieberman, but one was allowed to stand.

The impoundment of issue 26 was reversed, but that of issue 25 was upheld — even though the reason for censoring both was that they reported on the fight against Florida prison censorship. State officials declined to tell Goldstein what the difference was.

On Aug. 8 issue no. 29 was impounded at the Tomoka Correctional Institution. The reason? “Page 1-3.” No explanation. The articles on these pages are “Socialist Workers Party launches 2018 Campaigns,” “Protesters Demand ‘Release Video!’ in Cop Shooting of Chicago Barber,” “New Openings for Working Class as Imperialist ‘World Order’ Unravels,” “Protests Across South Iraq Hit Gov’t Neglect, Iran Intrusion,” and Woman’s Right to Abortion Is Debated in Northern Ireland.” “Page 1-3,” the warden writes, “depicts, describes or encourages activities which may lead to the use of physical violence or group disruption” and “presents a threat to the security, good order, or discipline of the correctional system or the safety of any person.”

“Banning the Militant is an unconstitutional attack on the rights of the Militant, our readers behind bars and freedom of the press,” said Studer. “All working people need the right to read and discuss what is happening in the world and to hear the working-class perspectives of the Socialist Workers Party to help chart a road forward for our class.”

Those who have spoken out against prison censorship of the Militant include the American Civil Liberties Union, National Lawyers Guild, Amnesty International, PEN America and prisoner rights groups.