“I like to see a working person running for office,” Christina Etapa told Dan Fein, Socialist Workers Party candidate for governor of Illinois, when he knocked on her door in the Brighton Park neighborhood of Chicago Sept. 9. “All these politicians are into it for their own self-interest and other rich people like themselves.”

Fein is one of the members of the SWP and the Communist League in Canada standing as party candidates this fall (see full list at right). Taking the party’s politics to workers’ doorsteps in cities, towns and rural areas is the central activity of the party and of the Communist Leagues in Australia, Canada, New Zealand and the United Kingdom, week in and week out all year round. 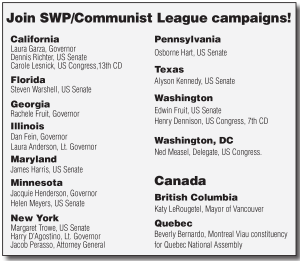 They discuss the developments in politics, as the “world order” the U.S. capitalist rulers imposed after they emerged the winner from the second imperialist world war is increasingly coming apart. They stress the need for workers to chart a political course independent of the capitalist rulers, their party and their state, to join with the SWP in building our own party. They find interest in discussing a way forward for the working class and the labor movement.

Fein and Etapa talked about the need for working people to unite across all the divisions bosses try to impose on us — native-born vs. immigrant, employed vs. unemployed, Black vs. Caucasian, etc. — and build a movement that can challenge the capitalist rulers and overturn their system of exploitation, war and oppression.

“I walked the picket line with hotel workers two days ago,” Fein said. Members of UNITE HERE Local 1 are on strike at 25 Chicago downtown hotels. “My party urges workers to join their struggle for year-round health care. Workers deserve government-financed health care, regardless of their situation. Their strike strengthens the labor movement.” (See article on page 5.)

“My dad helped get the union into the factory where he worked 36 years in the maintenance department,” Etapa said. “After they got the union, the owners closed the doors and put them on the street and eliminated his pension. He was able to get on at the Chicago Transit Authority but had to then work until he was 70 to get a pension. He retired and a year later he died.”

Fein works at Walmart where there is no union. He said this is the most important thing for workers there, how to figure out a way forward to organize at the biggest private company in the country.

“Workers without unions need to realize that they’re affected by what the unions have won,” Etapa said. “And that they can organize and build unions.”

She signed up for the Militant and picked up three books on special with the subscription — Are They Rich Because They’re Smart?  and The Clintons’ Anti-Working-Class Record: Why Washington Fears Working People, both by SWP National Secretary Jack Barnes, and Is Socialist Revolution in the US Possible?  by SWP leader Mary-Alice Waters.

The party speaks out as a tribune of the people against all the capitalist rulers’ assaults — against attacks on jobs, wages and working conditions, on women’s right to choose abortion, for amnesty for immigrant workers in the U.S., against the debt slavery forced on working farm families and against police brutality.

Fein and other party members joined the Sept. 5 demonstration outside the courthouse where Chicago cop Jason Van Dyke is on trial for shooting and killing 17-year-old African-American teen Laquan McDonald (See article on page 4).

Laurie McClarty picked up a subscription and Are They Rich Because They’re Smart?  from Communist League member Lynda Little, who knocked on doors in McClarty’s neighborhood in Surrey in the lower mainland of Vancouver, British Columbia, in mid-August.

She invited Little to come back and on Aug. 29 they got together at McClarty’s house, joined by Katy LeRougetel, Communist League candidate for mayor of Vancouver in upcoming October elections. They discussed the world capitalist economic crisis, where it comes from and what it takes for workers to fight against the effects on our class and to change the image the rulers impose on us that we are not capable of taking power and running society.

“Wars are hugely profitable for the military-industrial complex,” McClarty said, “and they have a disproportionately large amount of influence over politicians.”

“Wars are built into the capitalist system, they are the continuation of politics by other means,” LeRougetel said. “It’s the ultimate weapon in the competition and rivalry between the capitalist classes in different countries and their way to protect their rule and their system.”

“There is no ‘we,’ every country is class divided,” Little added. “The working class is the social force that can lead the fight to overturn capitalism and take the power to make wars out of the hands of the warmakers.”

She said that fighting to bring the working class together, speaking out for the needs of all the oppressed and exploited is key.

They talked about how experiences in the class struggle can transform working people and give us confidence in our own capacities.

McClarty’s said she saw that when she worked a season on railway track maintenance, which changed both her and her co-workers. She was the only woman on a 16-person crew and at first she was the butt of jokes and threats.

“My kids learned to cook that summer, when I would come home so tired I couldn’t move,” she said. “But at the end of the season when we were finished, every single guy shook my hand and said I’d earned my place. People do change when they get to know you.”

McClarty decided to get another book, The Clintons’ Anti-Working-Class Record, and hopes to place that and other Pathfinder titles on revolutionary, working-class politics in the local library. She said she looks forward to learn more about the Communist League.

To join with the party in door-to-door discussions with fellow workers, or learn more about our program and activities, contact the SWP or Communist League nearest you, listed in the directory.

Front Page Articles
Feature Articles
Also In This Issue
Editorials
On the Picket Line
Books of the Month
As I See It
25, 50 and 75 years ago