Socialist Workers Party candidates and their supporters are taking advantage of the last days before the Nov. 6 midterm elections to step up campaigning. They are presenting a course of struggle and independent working-class political action for workers and farmers against the blows inflicted on us by the crisis wracking the capitalist system today.

The SWP campaign stands in sharp contrast to the Democratic and Republican parties, that try to convince working people that the dog-eat-dog capitalist system is as good as it gets, and saturate the airwaves with vitriolic attacks on one another.

The SWP appeals for workers’ votes, but, more importantly, encourages them to join efforts to unify the working class by participating in labor battles and struggles that break out today. The party calls for building the unions, transforming them into instruments controlled by the rank and file and used to bring together the entire working class. Workers need our own party, a labor party, that can fight to bring workers and farmers to power.

SWP campaigners are knocking on doors in cities and towns across the country, engaging workers in discussion and debate about how we can defend our class interests and become stronger and more confident in the process.

The discussions with workers won’t come to a halt after Nov. 6. The party, and sister Communist Leagues in Australia, Canada, New Zealand and the U.K. are at the halfway point in an eight-week drive to sell 1,400 subscriptions to the Militant and 1,400 books by party leaders. As part of the drive, the SWP is also working to raise a party-building fund of $100,000.

Alyson Kennedy, SWP candidate for U.S. Senate from Texas, was one of a number of party candidates who joined in vigils and protests against the Oct. 27 anti-Semitic attack on a Pittsburgh synagogue. She spoke at a vigil sponsored by the Dallas Peace and Justice Center the next day.

“We call on all working people and the unions to speak out against this and all acts of Jew-hatred,” Kennedy told the protesters. “History tells us that Jew-hatred rises in time of capitalist crisis. The bosses use it to divert workers from fighting their real enemy — capitalism.”

Maria Pecina first met the SWP in Dallas when party members knocked on her door and introduced themselves. Growing up she worked in the fields with her parents and got to like the idea of workers standing up for better conditions, which they did. She got a subscription to the Militant and bought Are They Rich Because They’re Smart? by SWP National Secretary Jack Barnes.

Kennedy set up a dinner with Pecina last week to see what she thought of the party after reading about its views and activities, and to tell her about the party-building fund. “I like to support people who want to make a difference,” she told Kennedy. “I like that you stand for something that you believe in.” She renewed her subscription, bought Malcolm X, Black Liberation, and the Road to Workers Power by Barnes, and pledged $100 for the fund.

Róger Calero, SWP candidate for New York governor, and party member Seth Galinsky talked with Rosa Vasquez, a retired preschool cook, at her apartment door in the Bushwick area of Brooklyn Oct. 25. She liked the SWP message about the working class fighting to defend its interests.

“She listened carefully when we said workers need our own party, a labor party based on the unions,” Galinsky said. “And that we need to break out of the framework of lesser-evil politics.” 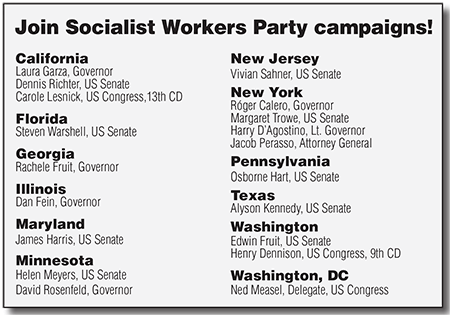 Vasquez said that she intended to back the Democrats, but that she really believed that none of the politicians are on side of working people. “You have a point on these politicians all being the same,” she said. She signed up for a Militant subscription to follow the party and its campaigns.

Harry D’Agostino, a musician from Albany and the SWP candidate for lieutenant governor of New York, stopped in Louisville Oct. 26 as he was returning from a road trip. He joined SWP members to visit a picket line of Teamster union members on strike against Allied Ready Mix.

“Earlier this month, my campaign supporters walked the picket line of striking school bus drivers in Providence, Rhode Island,” D’Agostino told Allied striker Derrick Rowe. “They won their fight against attacks on their retirement. When workers fight back against the indignities we face from the bosses and their government, we begin building the confidence and experience we’ll need as a class to win bigger battles to come.”

Rowe decided to buy two books — Is Socialist Revolution in the US Possible? by SWP leader Mary-Alice Waters and The Working Class and the Transformation of Learning by Barnes.

“It’s not just the best coverage of our strike out there,” Eddie Pirrmann, another picket, told SWP campaigners, explaining why he subscribes to the Militant. “This paper talks about the struggles of workers all around the world. Where else can you get that?”

In California SWP candidates are campaigning with a statement, “Amnesty for immigrants! Unite, organize all workers!” It describes how the Teamsters union that is fighting to win recognition for truckers at the Port of Los Angeles combined their October three-day strike with a protest against threatened deportation of immigrants. Some of these workers are truckers and union supporters whose Temporary Protected Status is under attack by the White House.

Dennis Richter, SWP candidate for U.S. Senate from California, and his supporters took the campaign to the Sun-Maid plant gate in Kingsburg, where workers recently ended a strike. Many stopped their cars for discussions and 26 got copies of the Militant.

The SWP campaigners also knocked on doors in nearby Selma, where Richter spoke with plumber Dicky Gonzales and his wife Melissa Ocampo, a waitress whose aunt had been on strike against Sun-Maid.

“I’ve punched the clock since I was 15,” Gonzales told Richter. “I didn’t vote, but I leaned toward Trump because he was for small businesses and a better economy. He said he wasn’t against immigrants, but they need to work. He talked more about the working class than Clinton.”

“The majority of workers aren’t for deporting immigrants,” Richter said. “The SWP explains why amnesty for all undocumented workers in the U.S. is in the interests of the working class and unites us.

“We don’t call for open borders, it’s utopian and dangerous under capitalism,” Richter said. “We support building a powerful working-class movement to bring solidarity to all workers struggling to make a living, here and abroad — from the Sun-Maid strike to the 77-day strike of Chiquita workers in Honduras earlier this year.”

“If you’ve never had to struggle to put food on the table, you can’t talk about what it is to struggle,” Gonzales said. “That’s why I haven’t voted for years.”

“We need our own party, and fighting unions,” Richter replied. “A labor party would fight against Washington’s wars,” he told the couple, who said they have several relatives who are veterans. “More than 2 million workers have cycled through the 18-year Afghanistan War and the U.S. rulers’ wars in Iraq, all fought in the interests of the handful of billionaire capitalist families. My campaign calls for withdrawal of all U.S. troops from the Mideast and Korea.”

They said they really appreciated the discussion and the literature.

Vote for the SWP candidates Nov. 6! Join the SWP’s ongoing campaign to extend the reach of the Militant, books by party leaders and to reach the $100,000 goal of the party-building fund. To get involved, contact a party branch near you. 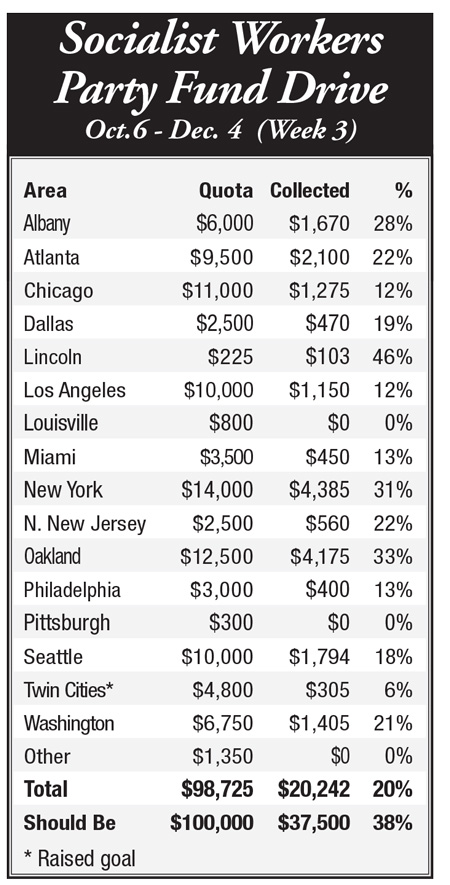