As the Socialist Workers Party’s eight-week drive to win 1,400 readers of the Militant, sell 1,400 copies of books by party leaders and raise $100,000 for the SWP Party-Building Fund enters its final week, branches of the SWP across the U.S. are on a stepped-up footing to reach the goals.

The SWP’s sister parties, Communist Leagues in Australia, Canada, New Zealand and the U.K., are part of the effort.

“We’re organizing door-to-door teams every day between now and Dec. 4 both here and in the region,” Alex Huinil, party branch organizer in Albany, New York, said Nov. 27. “We get a great response to the Militant’s coverage of the Florida victory extending the right to vote to tens of thousands of ex-prisoners.”

“We’re building on gains made in our recently concluded SWP election campaign here. When we campaign confidently and boldly, it attracts workers to the party.

“We’re making an effort to introduce our books along with the Militant early in the discussions. We sold 13 books in the past week at workers’ doors and on the job.”

The final-week plan of SWP members in Los Angeles includes going door to door in communities near the Mexican border to discuss why the labor movement needs to fight for amnesty for the millions of undocumented workers living in the U.S. They are also traveling to Ventura County to talk to working people affected by a raging forest fire there.

“The only way workers can defend ourselves effectively is when we face the bosses and their government united and organized,” Gerardo Sánchez, a member of the SWP in Dallas, told Cristina Retana, when he knocked on her door in Fort Worth, Texas. He showed her pictures of workers responding to factory raids by the rulers’ immigration cops in Is Socialist Revolution in the US Possible? by SWP leader Mary-Alice Waters.

“It’s true. They keep us divided to attack us,” Retana said. The SWP fights for the labor movement to demand amnesty for all those in the U.S. without papers, Sánchez explained.

After reading the back covers of the books that Sánchez showed her, she got Waters’ book, as well as The Clintons’ Anti-Working-Class Record and Are They Rich Because They’re Smart? by SWP National Secretary Jack Barnes, along with a subscription to the Militant.

“In northern New Jersey we’re behind on our quotas, but we have a detailed day-by-day plan to complete the drive,” SWP organizer Dave Prince told the Militant Nov. 27. The drive overall is behind schedule.

Knocking on doors in a trailer park in Marietta, Georgia, Nov. 25, Susan LaMont, SWP organizer in Atlanta, and Sam Manuel met Shanae Swan and her husband Roy, who works for an apartment maintenance company. Shanae used to work in the Walmart deli in Dalton, where she grew up.

“I had to quit after two months, because they were asking me to work 60 hours a week,” she said. When LaMont and Manuel showed her the Militant article on the Florida victory for ex-felons, Shanae and Roy both said this was good for all workers.

Looking over the Militant, including the article on the hotel workers’ strikes in San Francisco and Hawaii, Shanae decided to subscribe. “I’d like to try the Militant because it’s interesting to learn about different outlooks and what other people, like the hotel workers, are doing,” she said.

Rachele Fruit, who ran as the 2018 SWP candidate for governor of Georgia, reports she sold five campaign books along with four subscriptions on a door-to-door team in Douglasville.

One of the books was “It’s the Poor Who Face the Savagery of the US ‘Justice’ System”: The Cuban Five Talk About Their Lives Within the US Working Class. This book — which has interviews with five Cuban revolutionaries who served up to 16 years in U.S. prisons on frame-up charges for their activity in defense of the Cuban Revolution — helps describe both the conditions faced by workers behind bars and the example of the Cuban Revolution for workers in the U.S.

‘Finally, we won something real’

Steve Warshell, Socialist Workers Party candidate for U.S. Senate in Florida in the last election, talked with airport worker Ed Laporte, 40, and his sister at their doorstep in Miami Gardens, Florida, Nov. 18. Laporte’s brother is serving a 10-year prison sentence for burglary. He said the passage of Amendment 4 was “about time. Finally people have won something real.”

“We need to build on this victory and fight for the right to a trial by a jury of one’s peers,” Warshell said. “It’s reached the point where the police don’t have to prove anything,” Laporte said, agreeing. “They just threaten and people feel they have to accept a prison sentence.”

“My brother never had a trial,” Laporte said. “He didn’t really know what he was accused of doing until after he’d been in the Broward County jail for weeks and his lawyer told him the proposed ‘deal’ from the prosecutor. He was afraid they would carry out their threat to accuse him of murder if he didn’t agree.”

“My supporters and I are involved in the ongoing fight for the right of workers behind bars to read my party’s paper, the Militant, in Florida prisons,” Warshell said. Laporte and his sister decided to subscribe.

Dan Fein met Christine Kelley when he knocked on her door campaigning in Blue Island, Illinois, Nov. 25. He told her about how workers on strike against Marriott Hotel bosses in several cities have the slogan, “One job should be enough!”

“I work three jobs!” Kelley told him. “Full time at a child care center, part time in a restaurant, and I sing in a band. We certainly need unions where I work. I like what you stand for, like amnesty for the undocumented workers,” she said. Fein showed her Are They Rich Because They’re Smart? which Kelley decided to buy along with a subscription.

“Hold on!” Deborah Collins, a retired medical assistant, told SWP members after they’d talked about working-class politics and the party at her doorstep in an apartment building in New York Nov. 23. She went inside to get money to make a contribution to the SWP Party-Building Fund. She said she was particularly interested in the Militant’s coverage of a recent victory by Walmart cashiers in their fight for the right to sit while at work.

“The people who write these rules sitting at their desk, wouldn’t survive standing all day, every day,” she said, handing over her donation. “I know, I worked on my feet my entire life.”

If you’d like to join SWP members as they broaden their reach, either in the final week of the drive or as they keep knocking on doors afterward, contact the nearest party branch listed in the directory. 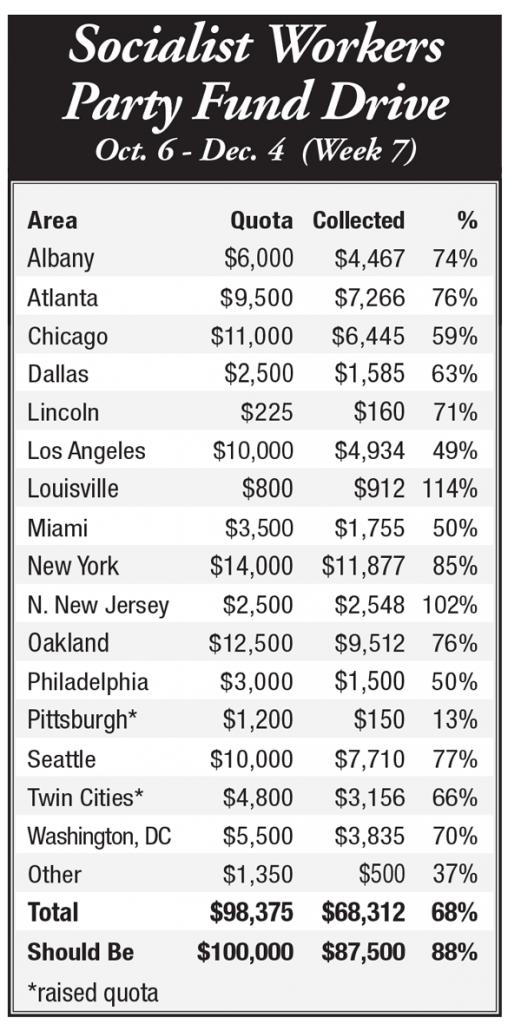