LOS ANGELES — Nan Bailey, 66, a leader and cadre of the Socialist Workers Party for 50 years, died here Dec. 12 after a 15-year battle with chronic lung disease. A meeting to celebrate her contributions to building the SWP will be held in Los Angeles Dec. 30.

Bailey helped lead the party’s work in the industrial trade unions, in the struggle for Black liberation, and in building party branches in a number of cities. She served 18 years on the SWP’s National Committee, the leading body of the party.

In the early 1980s Bailey helped lead the party’s participation in the National Black Independent Political Party. NBIPP was launched in Philadelphia in November 1980 at a convention attended by 1,500 people, with the goal of establishing a political party independent of the Democrats and Republicans, the capitalist rulers’ two main parties.

“The convention offered a glimpse of the extent to which the capitalist system has exposed itself in the eyes of millions of Black people. Many pointed to capitalism as the root of the racist oppression and economic exploitation of Blacks,” Bailey wrote in a Dec. 12, 1980, Militant article on the founding convention.

The National Black Independent Political Party adopted a far-reaching charter to fight national oppression and capitalist exploitation. It dissolved a few years later as many in its leadership retreated from the founding program and the independent course fought for by SWP members, instead trying to steer members into the Democratic Party.

In the late 1980s Bailey was working as a meatpacker in Des Moines, Iowa, when Mark Curtis, a fellow meatpacker and member of the SWP, was framed up on rape charges as he helped to lead a fight against government attacks on immigrant co-workers. She joined many in the area and across the country in waging a vigorous defense of Curtis that won widespread support. 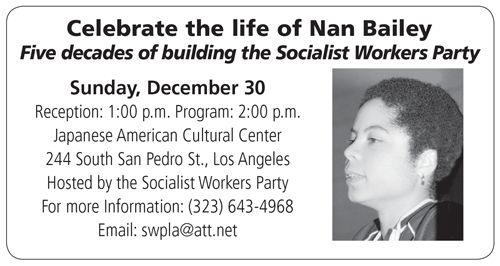 Bailey was the organizer of the party’s trade union committee in the late 1990s and a leader of its fraction in the International Association of Machinists. She worked in aerospace plants, in meatpacking plants, and as a sewer and a presser in garment and textile factories.

In 1981, she attended the party’s leadership school for an intensive six-month study of the writings of Marx and Engels.

In 1970, as a student at Brown University in Providence, Rhode Island, Bailey joined the Young Socialist Alliance, the youth organization in political agreement with the SWP. She was recruited by the YSA’s leadership role in the fight against Washington’s imperialist war in Vietnam. She was a leader of the YSA for many years afterward. She joined the Socialist Workers Party after leaving Brown.

In early 1972, she volunteered in the offices of the Women’s National Abortion Action Coalition in Washington, D.C., that was coordinating protests demanding a woman’s right to choose an abortion.

During the battle to desegregate the Boston schools in the mid-1970s Bailey spoke across the country winning support for the fight to overturn segregation in Boston’s schools, where Black youth were facing assaults by racist mobs.

Bailey carried out many important SWP leadership assignments over the decades. She served as part of the secretariat for SWP National Secretary Jack Barnes. She was a volunteer staff writer for the Militant, and also did a stint in the party’s print shop.

The Militant will carry a full report of the Dec. 30 meeting to celebrate Bailey’s political life.