On the 60th anniversary of the triumph of the Cuban Revolution, the Militant is reprinting excerpts from The Second Declaration of Havana. This manifesto was presented by Fidel Castro, the central leader of the revolution, to over 1 million people gathered in Havana’s Plaza of the Revolution, Feb. 4, 1962. In the following days, hundreds of thousands more adopted the document at rallies as well as in workplaces, fields and schools around the island. Copyright © 2007 by Pathfinder Press. Reprinted by permission.

Cuba affronts the imperialists in a special way. What is it that is hidden behind the Yankees’ hatred of the Cuban Revolution? What is it that rationally explains the conspiracy — uniting for the same aggressive ends the richest and most powerful imperialist power in the contemporary world and the oligarchies of an entire continent, which together are supposed to represent a population of 350 million human beings — against a small country of only 7 million inhabitants, economically underdeveloped, without financial or military means that could threaten the security or economy of any other country?

What unifies them and incites them is fear. What explains it is fear. Not fear of the Cuban Revolution, but fear of the Latin American revolution. Not fear of the workers, peasants, intellectuals, students, and progressive layers of the middle strata who by revolutionary means have taken power in Cuba, but fear that the workers, peasants, students, intellectuals, and progressive sectors of the middle strata will take power by revolutionary means in the oppressed and hungry countries exploited by the Yankee monopolies and reactionary oligarchies of the Americas; fear that the plundered people of the continent will seize the arms from their oppressors and, like Cuba, declare themselves free peoples of the Americas.

By crushing the Cuban Revolution they hope to dispel the fear that torments them, the specter of revolution that threatens them. By eliminating the Cuban Revolution, they hope to eliminate the revolutionary spirit of the people. They imagine in their delirium that Cuba is an exporter of revolutions. In their sleepless merchants’ and money lenders’ minds lives the idea that revolutions can be bought, sold, rented, loaned, exported and imported like a piece of merchandise. Ignorant of the objective laws that govern the development of human societies, they believe that their monopolistic, capitalistic, and semifeudal regimes are eternal. Educated in their own reactionary ideology — a mixture of superstition, ignorance, subjectivism, pragmatism, and other mental aberrations — they have an image of the world and of the march of history conforming to their interests as exploiting classes. …

Cuba is the Latin American nation that has made landowners of more than 100,000 small farmers and ensured year-round employment on state farms and cooperatives to all agricultural workers. It has transformed garrisons into schools; given seventy thousand scholarships to university, secondary, and technical students; created classrooms for the entire population of children; totally wiped out illiteracy. It has quadrupled medical services; nationalized foreign interests; suppressed the abusive system that turned housing into a means of exploiting people. It has virtually eliminated unemployment; suppressed discrimination on account of race or sex; rid itself of gambling, vice, and administrative corruption; armed the people. It has made the enjoyment of human rights a living reality by freeing men and women from exploitation, lack of culture, and social inequality. It has liberated itself from all foreign tutelage, acquired full sovereignty, and established the foundations to develop its economy in order, no longer, to be a country producing only one crop, sugar, and exporting only raw materials.

And yet it is Cuba that is expelled from the Organization of American States by governments that have not realized for their people any one of these achievements. How will they be able to justify their conduct before the peoples of the Americas and the world? How will they be able to deny that, according to their political conceptions, it is the policy of land, bread, work, health, liberty, equality, and culture; of accelerated development of the economy, of national dignity, of full self-determination and sovereignty that is incompatible with the principles of the hemisphere?

The people think very differently. The people think the only thing incompatible with the destiny of Latin America is misery, feudal exploitation, illiteracy, starvation wages, unemployment; the policy of repression against the masses of workers, peasants, and students; discrimination against women, Blacks, Indians, mestizos; oppression by the oligarchies, the plundering of their countries’ wealth by the Yankee monopolists; the moral suffocation of their intellectuals and artists; the ruin of the small producers by foreign competition; economic underdevelopment; peoples without roads, without hospitals, without housing, without schools, without industries; submission to imperialism; renunciation of national sovereignty and betrayal of the country.

How can the imperialists make their conduct toward and condemnation of Cuba understood? What words and what arguments will they use to speak to those whom, all the while exploiting them, they have ignored for so long? …

To the accusation that Cuba wants to export its revolution, we reply: Revolutions are not exported, they are made by the peoples.

What Cuba can give to the peoples, and has already given, is its example.

And what does the Cuban Revolution teach? That revolution is possible, that the peoples can make it, that in the contemporary world there are no forces capable of halting the liberation movement of the people. 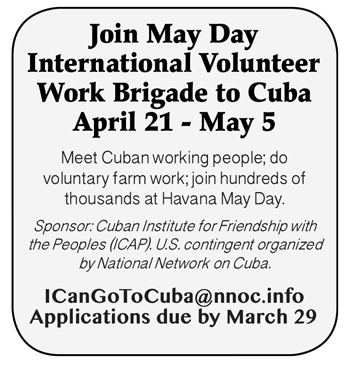