DALLAS — Socialist Workers Party mayoral candidate Alyson Kennedy and fellow campaigners have knocked on doors in working-class neighborhoods all across Dallas and the surrounding Texas region for the last two weeks — introducing the party and discussing how working people need to organize and fight in their own interests.

They’ve found widespread interest in discussing what working people face today, the crisis of capitalism behind these conditions and the proposals the SWP campaign raises.

This is the main activity of the SWP.  Party members follow the roads to cities and towns to stop and knock on doors to speak with working people. SWP campaigners discuss the conditions working people face and that the only way out, in the face of what capitalism has to offer, is along the working-class road to power.

In East Dallas, Kennedy met Felicia Palacios, 32, who said that some male friends had encouraged her to get a construction job. “After I started, I wasn’t called to work for a week. The boss told me the guys wouldn’t work if I did,” she said.

“So I went to the site and told my co-workers why I need the job. They said, ‘OK.’ I do framing and roofing, and now the guys are training me to read construction plans,” she said.

Kennedy told Palacios about her own experiences when she started working as an underground coal miner.  She described how women who worked in the mines won support from male miners and the United Mine Workers union. “We need to rebuild a labor movement that speaks for all the exploited and oppressed and organize unions to fight for better conditions,” said Kennedy.

Palacios told Kennedy she wanted to help her campaign. She got a subscription to the Militant to follow the party’s activities and signed the petition to put Kennedy on the ballot.

Working people here, like across the country, have seen their wages and working conditions hard hit by the bosses and their government over the last few decades. They know something fundamental is wrong and want to know why, and what they can do about it.

Because they don’t see some powerful social struggle — like a rising labor movement or mass movement against imperialist war — they tend to look for an answer in the elections. That’s why many decided to vote for Donald Trump in 2016, looking at it as a way to demand change and against the “swamp” of suits in Washington and every statehouse.

“I voted for Trump as a protest and because he wasn’t really a Democrat or a Republican,” John Daniels told Kennedy in southeast Dallas.

“As Mexicans and Blacks moved into this neighborhood, a lot of people left, but I didn’t. When I was invited to a barbecue by my Mexican neighbors, we got talking and I told them I voted for Trump. They were shocked, but we got along. They call me ‘Gran Torino,’” Daniels said. He was referring to the Clint Eastwood movie about an aging auto worker in Detroit who seems like a racist but ends up with strong relations with neighboring Asians and others.

“Everyone knows their neighbors here. We look out for each other,” Daniels said.

“My campaign seeks to mobilize working people to fight for amnesty for all those in the U.S. who are undocumented,” Kennedy said. “The bosses and their parties, the Democrats and Republicans, use the immigration laws to doubly exploit immigrant workers, to drag down the wages of all working people and to try and get us to fight among ourselves instead of against their dog-eat-dog system of capitalism.”

“I’ve visited Cuba, where people and their government look out for their neighbors,” Kennedy said. “Working people there had a revolution, overthrew the U.S.-backed Batista dictatorship and took power into their own hands. That’s what workers and farmers need to do here.”

“That’s why they restrict travel there,” said Daniels, “Because they don’t want Americans to see what is going on in Cuba.”

Daniels said he had already run into Kennedy campaigners earlier and signed the petition. “I’m going to vote for you,” he told her.

Kennedy and campaign supporters Mike Galati and Jacquie Henderson met Moises Lopez and Cirilo Martinez at their home in East Dallas.  “We work all our lives and what do we have? Right now we have this house but they just raised the taxes so high it is difficult to pay them,” Lopez said.

“And we hear they have plans to wipe out all these houses because they want to build new, fancier houses that no one here will be able to afford.” He asked, “What would you do as mayor?”

People ask me a lot, “What would you do as mayor?” Kennedy told the Militant. “I explain that if I were elected mayor, it would mean that working people had decided in large number to fight for far-reaching change, for an independent working-class program, and the Socialist Workers Party would help advance that development.

“The question isn’t what I would do, it’s what we would do to transform ourselves in struggle, becoming capable of taking control of the government and our destiny,” she said.

Campaigners drove from Dallas 60 miles west to Weatherford, a town of 30,000. They picked a working-class neighborhood and began knocking on doors, where they met 21-year-old cabinetmaker trainee Andy Brown. “I’m young but I know what’s happening in the world,” he said.  “I agree that the whole system is stacked against working people. I’d like to be part of a movement organizing to unite workers to change things,” said Brown.

“We can do it,” responded this correspondent. “Just look at the example of Cuba where workers and farmers took over the country in 1959 and began to transform it, organizing in their own interests — in spite of opposition from every U.S. administration since.”

“I’d sure like to know about that,” said Brown. I invited him to visit Cuba on the May Day brigade. Brown invited SWP members to come back the next weekend so we could talk more about it.

Also in Weatherford, Henderson and I met fast food worker Andrew Brown. “My wife and I both work at Whataburger,” he said. “It’s hard to cover the basic costs for us and our two little ones. We don’t get paid enough even when we get a full week’s work.

“I have to look up an app on my phone to see what other restaurants in the chain have open hours and sometimes drive as much as 40 miles to get those shifts,” Brown said. Moving into their small house had cost them over $1,700 in rent and deposits and they have no money left for furniture.

“It’s increasingly hard for workers to get a home and build a family,” I said.

“This is not how it’s supposed to be. We need to think about organizing together, like your candidate says here,” Brown said, pointing to the party’s campaign flyer. He asked us to come back so he and his wife can sign up for the Militant and talk more.

Over the last two weeks, campaigners sold 153 party campaign books, 60 Militant subscriptions and 200 single copies of the paper. The most popular book was In Defense of the US Working Class, which reprints a speech SWP leader Mary-Alice Waters gave at a conference in Havana last year.

Over 750 people signed petitions to put Kennedy’s name on the ballot for the May 4 election, well over three times the requirement. 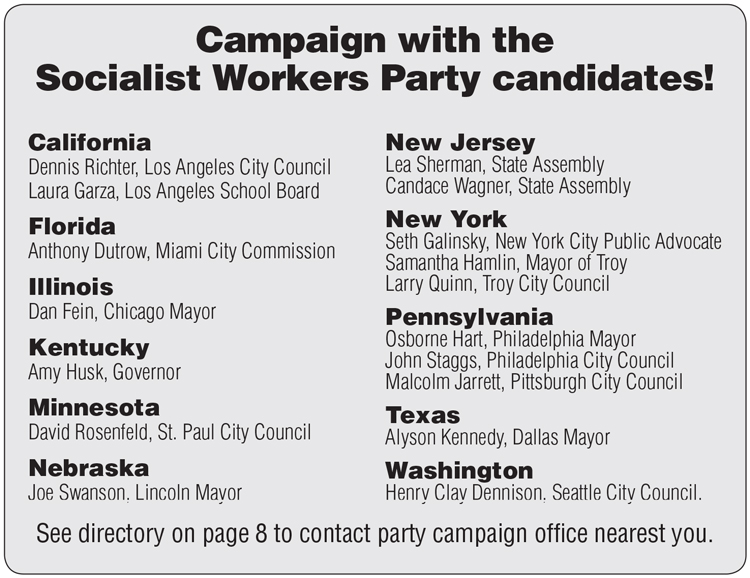 LOUISVILLE, Ky. — Amy Husk, Socialist Workers Party candidate for Kentucky governor, and her supporters are campaigning to defend women’s right to choose abortion from threatened new attacks here. Leaders in the legislature are moving to pass a “fetal heartbeat”…