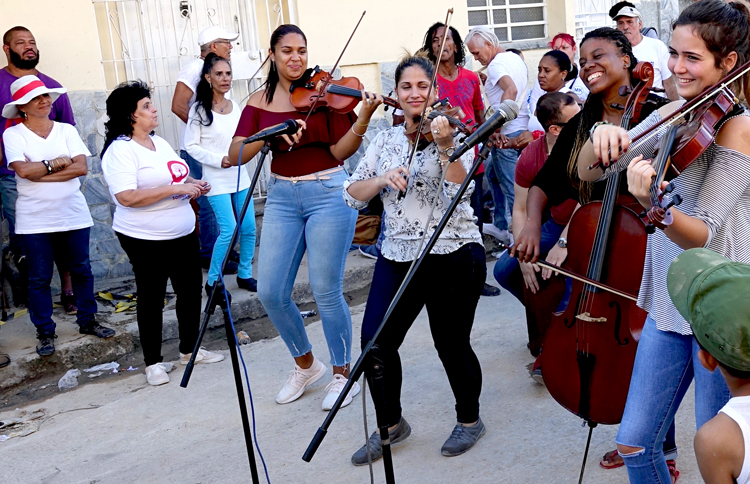 HAVANA —After a tornado ripped through the Cuban capital Jan. 27, wreaking serious damage in several of the poorest working-class neighborhoods here, the government, mass organizations and working people across the city went into action immediately.

Drawing on reserves set aside for such emergencies, as well as supplies donated by many workplaces, volunteer work brigades were organized to rapidly clear debris, restore basic services and begin to rebuild damaged homes and other buildings.

Less than a week later, Militant  reporters visited two of the five Havana districts ravaged by the storm, Diez de Octubre and Regla. We spoke with dozens of local residents and others helping with recovery efforts, and were welcomed into the volunteer work brigades.

“In our country we’re always prepared for hurricanes,” Amparo Clavell, a retired port worker and resident of Regla, told us. In Cuba, unlike capitalist countries, working people are organized ahead of time to protect lives and minimize losses.

“But the tornado was sudden. It struck without warning. And it caused a lot of damage,” Clavell said. It was the first tornado to hit Cuba in eight decades.

Six people have died and 200 were injured as a result of the storm, the daily Granma reported. Some 3,500 homes were damaged along with several hospitals, clinics, schools and neighborhood stores. Hundreds of thousands lost electricity, water and phone service.

We visited the Luyanó neighborhood in the Diez de Octubre district Feb. 2. It was a hive of activity. Hundreds of residents and other volunteers were at work clearing rubble. Utility workers were restoring downed telephone lines while construction workers replaced roofs, windows and water tanks.

Bárbara Borrego, a retired hospital worker, invited us into her home to see the damage. The roof had been torn off by the 200-mile-an-hour winds. “I clung to the door frame for protection,” she said. “Miraculously, I wasn’t hurt.” Many residents had been evacuated to other homes until theirs could be repaired.

Electrical and telephone crews from Havana were in evidence everywhere, reinforced by teams from provinces across the island. By Feb. 3 water and electricity had been restored in most of the storm-ravaged areas of Havana, and phone service was partially restored.

In Luyanó, the Hijas de Galicia maternity hospital had lost much of its roof, all its water tanks and most of its windows. Workers from two state construction contingents were busy repairing the facility.

In all the affected neighborhoods, state-run depots have been set up to provide residents with construction materials at steeply discounted prices to repair their homes. Those unable to pay now receive low-interest loans payable in 15 years.

Hundreds of volunteers from workplaces and schools across the region have offered their help. They are being organized by the Central Organization of Cuban Workers — the trade union federation — Federation of University Students, Union of Young Communists, neighborhood-based Committees for the Defense of the Revolution, Cuban Women’s Federation and other mass organizations.

“I’m from Santa Clara and know people there who volunteered to come here for the recovery work,” said Francisco Hernández, who was visiting his sister in Luyanó. Santa Clara is a four-hour drive from Havana.

Hernández pointed to new electric poles installed by utility workers within three days after the tornado. “They did a good job and did it fast,” he said.

A polyclinic, itself badly damaged, was the organizing center of much of the volunteer work in Luyanó. Among those reporting for duty Feb. 2 was a group of 40 medical students. They were organized into teams to go house to house and talk with residents, assess their needs — food, water, clothing, bedding, housing repairs, emotional support — and add the information to a centralized registry to make sure those needs are addressed.

Luis Alberto Pichs, rector of the Havana medical school, oriented the students beforehand. “You must remember people have been without power and water for six days,” Pichs told them. “You need to approach them with sensitivity as well as solidarity” — to listen to them and win their confidence that something will be done to help them.

While we were there, a group of social workers from the La Lisa neighborhood was also going door to door. A Baptist church served free spaghetti lunches. A string quartet, an opera trio, and Latin Grammy nominee Diego Gutiérrez all gave street performances, coordinated by the ministry of culture.

The two Militant  reporters visiting Luyanó were invited to come back the next day for a morning of voluntary work at the polyclinic. When we asked if we needed official approval to participate, the answer was, “We need you, not your passports. Just show up tomorrow at 8 a.m.”

We joined with doctors, other medical staff, and 70 nursing and medical students from African countries who are studying in Cuba. Together we shoveled rubble, removed damaged roofing panels, brought in replacement panels and unloaded sand for mixing into cement.

House to house in Regla

The other team of Militant  reporters visited Regla, one of the areas hit hardest by the tornado. Electrical and telephone workers were everywhere, putting up lines and poles.

State-run food stands provided plates of rice, stewed vegetables, cake and other street food at very low prices. Imara Cambell, who works at the nearby cemetery, was among a group of women waiting by one of the tents for some fried chicken to arrive. “Electrical power is just coming back on — we haven’t been able to cook for the past week,” she told us.

“This situation isn’t easy,” said Amparo Clavell, who was also waiting for the food. “But in Regla we always stick together. You know, we’re proud of our history of struggle, from the times of slavery to the revolutionary war.” Under Spanish colonial rule, Regla was the port of entry for ships carrying African slaves and Chinese indentured workers. Later, many joined the independence struggle against Spain.

At another spot, a brigade of 80 volunteers from the Havana Historian’s Office brought a truckload of clothing, food and water. They handed out supplies to residents and organized house-to-house teams.

“We collected clothing and shoes donated by our families and others. Bottles of water, canned goods, medicine, and some appliances came from our own workplace supplies,” said Perla Rosales, the brigade captain. Rosales, an architect, is assistant director at the Historian’s Office, which is responsible for restoration work in the historic district of Old Havana.

We accompanied one of the volunteers, Francis Crespo, who delivered food to the home of Juan Escull, a retired dockworker. Escull showed us the windows in his bedroom that had been blown out by the storm, as well as the damaged water tank on the apartment building roof.

We also joined four young volunteers going door to door. “We’re finding out which households have the most pressing needs,” said Adrián García. “Our first priorities are the elderly and the children.” After learning what was needed, they returned to the dispatch center, picked up whatever water, clothing or food they had, and returned to make deliveries.

As the day was drawing to a close, we spotted a crowd of children in the street, clapping and shouting, and stopped to join in. They were being entertained by clowns and magicians belonging to the Martha Machado Artistic Brigade. This contingent of musicians, artists and entertainers, which travels across the island, recruiting young people to join them in each area, is organized by internationally famous Cuban artist Alexis Leyva, who goes by the name Kcho.

Kcho’s name will be known to many Militant  readers. In 2013 he created a replica of the solitary confinement cells in U.S. prisons where the Cuban Five had been held. Installed in the lobby of the Havana Fine Arts Museum, it was visited by many hundreds of people, who learned more about the campaign to free the Five by studying the book I Will Die the Way I’ve Lived, published by Pathfinder Press. That book of paintings by Antonio Guerrero, one of the Cuban Five prisoners, had been the inspiration Kcho used to design his art installation.

What came through in talking with one person after another, residents and volunteers alike, was the confidence and pride of working people. Working-class solidarity is a way of life here. At the same time, what they accomplish through their own labor affects who they are. The banner under which they organize: “In Cuba no one is left to fend for themself.”

Mary-Alice Waters contributed to this article.

Join Cuba May Day Brigade, see the revolution for yourself!

PHILADELPHIA — “The best way to learn about Cuba is to go and see for yourself,” said Enrique Sacerio-Garí. He was encouraging the 20 people at a public meeting here Feb. 3 to sign up to go on the April…