“We think the problems that working people face in Troy are really similar across the country and the world,” Samantha Hamlin, Socialist Workers Party candidate for mayor, told a well-covered press conference March 20 at Troy City Hall in upstate New York.

Hamlin was speaking alongside Lawrence Quinn, SWP candidate for Troy City Council President. The two were featured on WNYT-TV Channel 13 newscasts throughout the day and on the front page of the March 21 Troy Record.

“The socialists’ agenda calls for a massive public works program. It favors amnesty for undocumented workers. And they’re demanding the immediate withdrawal of the U.S. military from around the globe,” the TV station reported. “They envision a worldwide movement that they believe will also benefit the people of Troy.”

In the lead article in the Record, Hamlin was quoted saying, “Our jobs increasingly don’t pay enough to feed a family and many work multiple jobs just to stay afloat.” She said that today’s crisis of the propertied rulers’ capitalist system is confronting working people with “lack of adequate health care, lack of worker safety regulations, opioid and alcoholism epidemics and the suicide rate among veterans.”

Quinn told the press, “We need to organize and fight politically for a massive public works program across the country to build schools, hospitals, and affordable housing” and rebuild the “deteriorating infrastructure in this country.”

“We want to raise the minimum wage to union scale for all workers. Provide unemployment payments until workers can find a job. And give workers control of safety on the job,” Quinn is quoted saying in the Record.

‘Alliance of workers and farmers’

“The Socialist Workers Party is for building an alliance between working people and small farmers,” Hamlin said at the press conference, to “take power from the superwealthy rulers and reorganize production of all society based on working-class solidarity and human need.” To build that alliance, Quinn said, “the labor movement must demand the government guarantee farmers their costs of production, including adequate living expenses.”

“Without our campaign, the working class doesn’t have a party to vote for that speaks in its interests,” Hamlin told WNYT.

The Record reported that Hamlin had attended a rally in Albany, New York supporting driver’s licenses for undocumented immigrants a few days earlier. She also called, the paper said, for “amnesty for all undocumented workers, a halt to farm foreclosures and end to ongoing wars overseas.”

Hamlin, who had “joined a solidarity brigade to Cuba in 2018,” pointed to the Cuban Revolution “as an example of how working people can transform ourselves in struggle, take political power and wield it in the interests of workers and farmers worldwide,” wrote the Record.

The SWP candidates asked workers and young people to join their campaign in “door knocking in Troy and across the region to discuss and debate how to build a working-class movement,” the paper reported.

This is one of the central activities of the Socialist Workers Party, taking the party, its books and the Militant to workers in smaller cities and towns and to farmers in rural areas to expand its reach.

After the press conference, Hamlin was joined by her Walmart co-worker, John Milne, in talking to working people in the area about the SWP campaign.

When they knocked on the door of Darlane Moshier, a retiree from the state Department of Motor Vehicles, she told them that the governor in Albany “says things are good, but things are not so good for normal people.” Milne, also a former state worker, said, “We had some rallies at the capital here because [then New York Governor George] Pataki wasn’t going to budge,” pointing to past fights by state workers. “We won some raises although it was a compromise.” It wasn’t what they had been demanding.

Hamlin showed Moshier The Clintons’ Anti-Working-Class Record: Why Washington Fears Working People by SWP National Secretary Jack Barnes. She explained workers “need to chart our own independent working-class political course and break from the two capitalist parties.” She got the book as well as a copy of the Militant.

While there aren’t a lot of strikes today, there is a deep discussion among working people about the debilitating effects of the capitalist rulers’ crisis on their lives and what can be done. In this context, the SWP finds real interest in its campaigns, program and publications.

To get more information and to join with members of the SWP, and the Communist Leagues of Australia, Canada, New Zealand and the U.K., campaigning at workers’ doors, contact the branch nearest you. 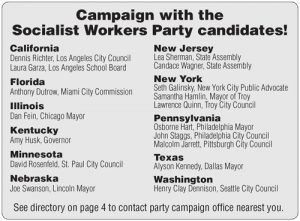 The Socialist Workers Party is launching a seven-week campaign to broaden interest in the party’s program and activity among working people. It will be centered on expanding the readership of revolutionary books and the Militant, and will run from April…