To advance the work of the Socialist Workers Party in exchanging views and sharing experiences with workers, farmers, and other exploited producers, and laying the groundwork for working together, the party has launched a drive to expand the readership of revolutionary books and the Militant, and to reach broadly for contributions to the Militant Fighting Fund, running April 6-May 28.

Through discussions with workers and farmers on their doorsteps and at labor and other protests, party members will learn more about the conditions working people are facing and their thinking about what needs to be done. And they will find openings to introduce the party’s program and activities. They will travel out widely in cities, towns and along country roads.

“A revolutionary party uses every example of capitalist oppression to clarify how working people can overcome the efforts of the bosses and their political system to deepen competition and divisions among us,” explains SWP National Secretary Jack Barnes in the introduction to the book Tribunes of the People and the Trade Unions, by Karl Marx, V.I. Lenin, Leon Trotsky, Farrell Dobbs and Barnes, which will come off the press during the drive. Their writings “show how we can work together in political actions, social protests, and solidarity activity in our common class interests,” Barnes adds. 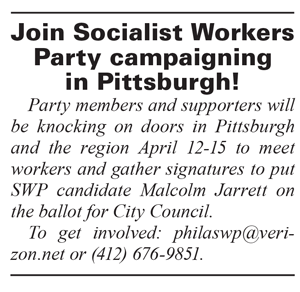 Party members find growing interest in unions and workers’ battles. “I am interested in the union question for restaurant workers. We’re in the trenches everyday, it’s like a war,” Ashley Brown told SWP campaigners Rachele Fruit and Lisa Potash when they knocked on her door in Fayetteville, Georgia, March 27. After being injured working as a cook at a Jones Beach restaurant in New York, Brown recently moved back in with her mother.

To combat the employers disregard for safety “we need to fight for workers control,” Fruit explained, pointing to the bosses culpability in the recent Boeing air disasters.

Brown replied, “We’re the ones that drive, who ride in trains and planes. Why do we have to pay the price?”

Potash said that she worked in a retail store where workers need a union. Organization is crucial, so we can unite and fight for our own class interests in the face of the bosses’ assaults.

“Workers need to rely on our own forces and build our own organizations,” she said. “Because of the big victory over Jim Crow segregation in the 1960s, we’re in a better position to do that today. We’re more united.” The socialist campaigners plan to return for further discussion.

Amnesty for workers without papers

Dye described how many working farmers there had to sell or rent out some of their land to make a living. She told Rosenfeld the money President Donald Trump wants to use to build a wall along the Mexico border could be used “a lot better, for kids that go hungry or for rebuilding after all the flooding that is going on right now.”

The capitalist rulers don’t want to stop immigration, Rosenfeld said, “but use it to drag wages down for all workers and blame immigrants for the problems we face. But they are victims of this dog-eat-dog system like all workers. We call for an amnesty for workers without what the U.S. government calls proper papers, to strengthen all workers’ ability to fight.”

The challenge facing workers, he said, “is to gain confidence that we can organize independently of the bosses and fight for our class interests. It will take millions of workers to build a movement that can take power out of the hands of those who run this country.”

Many of the questions workers face — like the question of immigration and the border — have been addressed by the working-class movement over many decades and are described in books by SWP leaders and other revolutionaries published by Pathfinder Press. All of them are being offered at a 20 percent discount during the drive.

Spokespeople for the propertied rulers “can talk all they like about building trenches and walls along the border with Mexico,” Barnes writes in Capitalism’s World Disorder: Working-Class Politics at the Millennium. “Other Republican and Democratic politicians can make their slightly more genteel-sounding proposals. But nothing will stop the swelling immigration into the United States and other imperialist countries.”

“Despite their intentions, the propertied families around the world are internationalizing the working class,” he said, and “toilers are migrating in larger numbers than ever before in human history, drawn in by the changing needs of capital.”

This is good for the working class, he explains, as it brings new experiences from workers’ struggles into our battles.

Five books are on special for half price with a subscription, featured in the ad on this page.

Party branches and sister Communist Leagues in Australia, Canada, New Zealand and the U.K. are discussing quotas for the sale of books and subscriptions, as well as for the Militant Fighting Fund. These quotas and progress in the drive will be covered weekly in the paper.

We urge readers to join us in this effort! 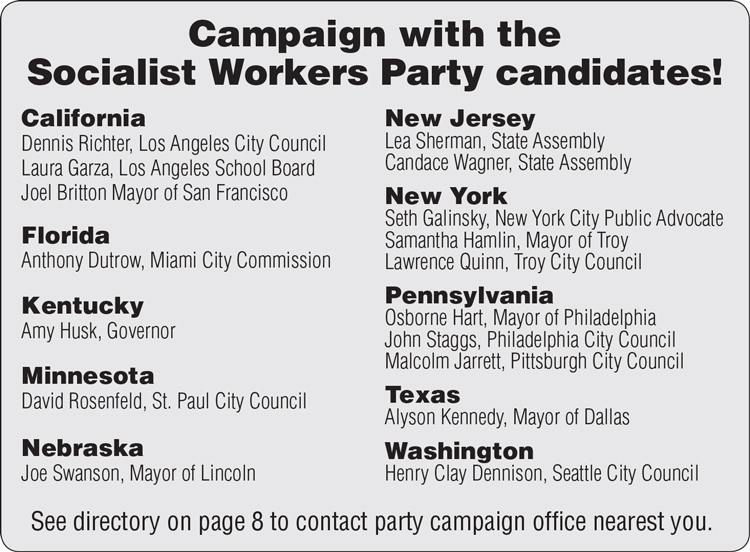 The Militant has set its annual Militant Fighting Fund at $115,000 to be raised by May 28. The fund is essential to meet the paper’s operating expenses; field reporting teams to cover developments in world politics; subsidize the price of…