The immigration raid in Allen, Texas, April 3 was aimed at intimidating all “unauthorized” immigrants in the U.S. The raids and deportations are also aimed at dividing U.S.-born from immigrant workers, by scapegoating workers without papers and painting them as criminals and claiming the government is acting to defend workers born here.

The real criminal is the capitalist system, which is driven relentlessly by their thirst for profit to attack working people, whatever the cost on human lives.

Workers without documents the government accepts are here because of the normal workings of imperialism, the highest stage of capitalism. U.S. capitalists exploit the resources of less developed countries, distorting their economies, driving peasants off the land and into the cities, setting in motion gang violence and backing undemocratic regimes in power. In the absence of a class-conscious workers movement in their own countries that can fight against exploitation and oppression, many working people decide to try their luck up north.

And U.S. bosses depend on immigrant workers as a source of cheap labor to compete against their economic rivals worldwide. They try to turn the spigots of immigration on and off depending on the ups and downs of capitalist production and trade.

The bosses need immigrants here, but they prefer that they are forced to live in the shadows, afraid to join unions or speak out. And if they can get native-born and immigrant workers blaming each other for the conditions they face, not capitalist exploitation, all the better.

Once here the government treats undocumented immigrants like criminals, in most states denying them access to driver’s licenses and holding the fear of deportation over their heads.

Working people understand right away what it means to be denied the right to drive. In many states — no matter what their “status” — workers can lose their license if they owe taxes, are behind on child support, or owe court costs, fines or tickets. It’s a catch-22. Don’t go to work, you can’t pay what you owe. Drive without a license, you risk more fines, even jail time. Immigrant workers have an added risk — deportation.

The fight for driver’s licenses and the rights of immigrants is a question for the entire labor movement.

To stand up to the bosses’ attempts to divide us, to fight for higher wages and better working conditions the unions need to say: “No more raids! Amnesty for the 11 million workers without papers in the U.S.!”

On May 1 — International Workers Day — join marches and protests across the country around these demands. 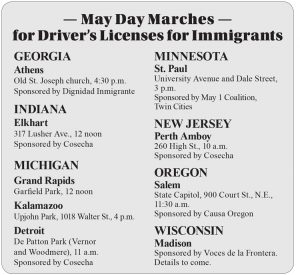 ALLEN, Texas — Two hundred Immigration and Customs Enforcement police and local cops surrounded the CVE Technology Group factory here April 3 and arrested 284 workers. They were accused of not being authorized to work in the U.S. It was…