REEDLEY, Calif. — Socialist Workers Party members and supporters from the Bay Area and Los Angeles spent two days in California’s agricultural heartland, the Central Valley, April 6-7. They knocked on doors to meet and get to know fellow working people here and in Kingsburg and Raisin City.

They discussed with workers on their doorsteps and passed out flyers with the party’s program. People they talked with bought seven books by leaders of the Socialist Workers Party and two subscribed to the Militant.

Party members and supporters, and members of the Communist Leagues in Australia, Canada, New Zealand and the U.K., are engaged in a seven-week effort to expand the political reach of the party and the paper and books they circulate, and to raise $115,000 to meet the Militant’s operating costs. They look to exchange views and share experiences with workers and farmers, small producers and other toilers, in cities, towns and farming communities, and to make lasting contacts.

“I’m here to learn what people in the Valley are going through,” SWP member Joel Britton told Vince, a longtime employee at the Del Monte cannery, now a high school teacher.

Vince, who declined to give his last name, replied that his stepfather has a grape ranch of 20 acres that has been in the family for five generations. Now the ranch doesn’t make enough to live on.

“The SWP raises the need for all workers to defend the working farmer,” Britton replied. “An example is what was accomplished by workers and farmers in Cuba as a result of their revolution. Farmers in Cuba cannot be foreclosed on if they are working their land.”

Campaigners met Burl Holley, an electrician and former farmer, who was plowing under a field of grass. After learning Britton was a member of the SWP, he turned off his tractor to talk.

“I think our problem is lawyers and politicians. I’m for capitalism. What are you campaigning for?” he asked.

“Both the Democrats and Republican politicians serve the interests of the wealthy,” Britton said. “Our party says we need to unite workers and farmers, wherever we live, to fight in our own interests. We can build a movement strong enough to forge a workers and farmers government.”

Britton pointed to the example of the yellow vest movement in France, where people hit hard by the crisis of capitalism in the small towns and rural areas have been protesting for weeks. “I think a similar thing is bubbling here below the surface,” he said.

“You should talk to the farmers up and down this road,” Holley said. “They’re  friendly people.”

Along the road lined with fruit and nut orchards, Britton talked with farmworker Oscar Unanzor, who was flying a kite with his son. Unanzor said his biggest concern was getting a raise to pay his family’s rent, which has gone from $750 a month to $950 in the last few years.

Unanzor’s daughter, Nicole, who is in high school, joined the discussion. She said she wants to study agriculture and remain in the area. “I like it here because it’s quiet, and people help each other. There is a community,” she said. After they talked more about what faces working people today, Unanzor decided to subscribe to the Militant.

SWP members are learning more about the wide-ranging impact of the capitalist crisis on all layers of the working class and other exploited producers. And they’re expanding the readership of the Militant and books by leaders of the revolutionary working-class movement and raising $115,000 for the Militant Fighting Fund.

The party has set a goal of selling 1,050 subscriptions and 1,055 books in an international effort through May 28. All books are being offered at 20% off. There are additional offers on titles featured in the ad below.

Party members in Oakland have gotten the Militant Fighting Fund off to a solid start, sending in checks totaling $2,050. With eight other areas sending in contributions, the fund has raised $4,493 in the first few days of the effort. Getting an early start is key to raising the funds needed to ensure the paper can continue to cover political developments.

Carole Lesnick reports that SWP members there asked readers of the paper who hadn’t made up their minds on how much to contribute to write a check now for what they could. They can give more later as the drive continues.

With the Democratic and Republican parties gearing up for the 2020 presidential election, SWP candidates for office — presenting a working-class alternative to the twin parties of capitalist rule — get a hearing among working people.

When SWP campaigners Maggie Trowe and Jacquie Henderson knocked on Mickale Hensley’s door in Williamstown, Kentucky, they showed her the campaign flyer for Amy Husk and Samir Hazboun, SWP candidates for governor and lieutenant governor. “I’ve been thinking about many of these questions, but didn’t have anyone to talk to about them,” she said as she studied the flyer.

Hensley, 26, works as a nurse. “For years I’ve hated how capitalism pits everyone against each other,” she said. “I was a sort of ‘Bernie Sanders person,’ but I don’t see much there either.”

Trowe pointed to the experiences workers and farmers went through in the course of the Cuban Revolution as an example for working people here. Hensley wanted to learn more and got a subscription and four books, including Cuba and the Coming American Revolution by SWP National Secretary Jack Barnes.

Jonathan Silberman in London reports that Communist League members there sold 60 books and five Militant subscriptions to politics-thirsty young people at a thousands-strong protest against the hated rule of Omar al-Bashir in Sudan April 6. Among the titles were five books by Thomas Sankara, the central leader of the popular revolutionary government in Burkina Faso in the 1980s. One woman who is going back to Sudan snapped up The Communist Manifesto and Capitalism’s Long Hot Winter Has Begun in Arabic to take with her.

To join in this effort, or for more information, contact the party branch nearest you in the directory.

Terry Evans contributed to this article. 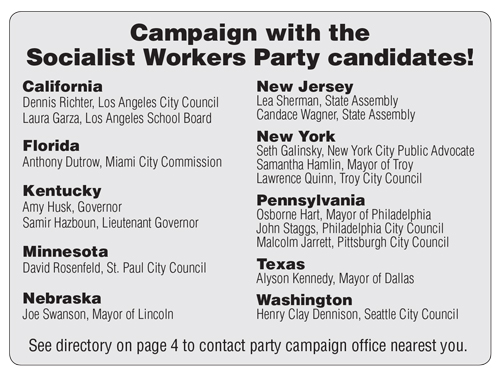