After his release from the notorious Angola, Louisiana, prison after nearly 44 years in solitary confinement, Albert Woodfox has kept doing the same thing he had been doing behind bars — standing up for what he believes in. Woodfox is touring the country and the world speaking out against the savagery of the U.S. “justice” system and calling for an end to solitary confinement.

He is promoting his book Solitary: My Story of Transformation and Hope, which describes his imprisonment, political awakening, frame-up on charges of killing a guard and prison officials’ failed attempt to break his spirit. 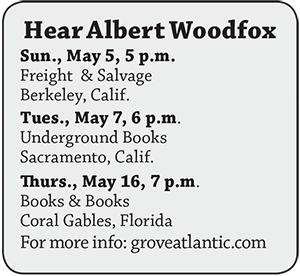 “I could have let the prison culture consume me,” Woodfox said in an April 25 phone interview with the Militant. “Instead, I was determined to be a better human being. To fight with strength and determination for a better cause.”

In Solitary Woodfox doesn’t flinch from telling the truth about himself or the prison system. He recalls how he ended up in prison.

“I robbed people, scared them, threatened them, intimidated them. I stole from people who had almost nothing,” he wrote. “My people. Black people.”

While in prison in New York in 1970, he met members of the Black Panther Party who impressed him with their discipline and conduct. They told him that change was coming and individuals can make a difference. And he began reading. By the time he was on his way back to Louisiana “it was as if a light went on in a room inside me that I hadn’t known existed,” Woodfox wrote.

Woodfox was sent back to Angola for armed robbery, where he helped set up a prison chapter of the Black Panthers together with fellow inmates Herman Wallace and Robert King.

“We were serving the Black community, but it went beyond that. We were concerned with oppressed people,” Woodfox told the Militant. “Not just oppressed Blacks and Hispanics.”

At the time Angola prison was segregated. “The one area where Blacks and whites were allowed altogether was in sports,” he said. “We came over with the idea that we could have football games and use that to communicate with each other. We tried to show the white prisoners that we had a common enemy and a common oppressor and we had much more in common. We began to build bridges between Black and white and other minorities.”

Their political activities were not to the liking of prison authorities. When prison guard Brent Miller was stabbed to death in a cell on April 17, 1972, prison officials framed Woodfox and Wallace for the killing, even though they knew neither man had anything to do with it. Miller’s widow, Leontine Rogers, came to the same conclusion and became a supporter of their fight for freedom.

King was also framed up for the killing of a fellow prisoner. Together they became known as the Angola 3. All three were found guilty in grossly unfair trials and placed in solitary for decades.

Woodfox credits books for helping to change his life. He read widely, from novels like A Different Drummer  by William Melvin Kelley to Frantz Fanon, Malcolm X, Ho Chi Minh, Mao Zedong, Fidel Castro and Che Guevara. “These books helped shape and change my way of looking at the world,” he said.

“They were motivating factors for writing Solitary,” he said. “I’m 72 years old. No matter how many speaking engagements I go on, it’s still a limited number of people I can reach. The book allows me to reach hundreds of thousands, maybe more.”

Despite being in solitary, Woodfox, King and Herman kept organizing against abusive conditions and winning fellow prisoners to join in solidarity.

It was a fight to get books. “You should see how many administrative remedies I filed to get them to reverse capricious decisions,” he said. Books and newspapers were passed hand to hand.

Institutional racism is the threat

Woodfox won his freedom in February 2016. When asked about the biggest difference he saw in life outside prison now, compared to before he was sent to Angola, Woodfox says, “Technology. Other than that, racism still exists, it just isn’t as brutal as when I left society. It’s more subtle.”

“Individual racists are easier to combat and overcome,” he said. “But the institutional racism is the real threat.”

“They say this system is democracy,” Woodfox said. “Really it’s all about class warfare. They have perfected a way to get people to fight against their own interests. This economic system divides everyone by race, gender, class and sexual orientation.”

Woodfox is pleased with the breadth of attendance at the meetings he has been speaking at around the country.

“King and I talked about the meetings,” he said. “There were a lot of questions the audience had that were never addressed.” They insisted that at each meeting there be time for the audience to join in. “It gave us a better understanding of how they see America and the world. There are a lot of very decent people who make up humanity, far more than not,” he said. “The desire for change is there.”

At every speaking engagement Woodfox describes the cruel nature of solitary confinement. “The way they impose solitary is arbitrary,” Woodfox said. “There’s no criteria for working your way out. There’s nothing you can do to get out of the predicament.”

Some prison reform proposals, like one in New York, call for a 15-day limit for any stay in solitary. “I don’t know where the 15 days comes from,” he said. “Anyone who’s been in solitary, I don’t think they would say 15 days.”

“Try staying in your bathroom or draw a 6-by-9-foot space in your living room for 23 hours,” he said. “You can have a TV, radio, all those things that we won through our resistance and hunger strikes.”

Woodfox  knew about the 2013 hunger strike against solitary by 30,000 California prisoners, who forged unity between Black, Latino and Caucasian prisoners, including some who had once been part of racist groups. “What they did was just brilliant,” he said.

“Prison officials try to justify their inhuman treatment by demonizing prisoners,” he said. “The purpose of their treatment is to break your spirit.”

“Neither prisoners nor security guards come from other planets,” he said. There are some individual guards “who don’t treat prisoners like animals or degrade them. But the culture of abuse is so powerful it eats the individual up.”

Woodfox’s U.S. tour continues. In May he will promote Solitary  in England and in August in Australia. Don’t miss your chance to hear him.