After months of noninterference, Florida prison authorities have banned three issues of the Militant since April 12, violating the constitutional rights of both the socialist newsweekly and its readers behind bars.

The jailers falsely charged that each of the issues “encourages activities which may lead to the use of physical violence or group disruption” or “otherwise presents a threat to the security, good order, or discipline” of the prison.

For issue no. 12, they cite an article on protests against the acquittal of the cop who shot and killed 22-year-old Stephon Clark in Sacramento, California, last March. For issue no. 15 they point to an article about the speaking tour of Albert Woodfox, who spent nearly 44 years in solitary confinement in the notorious Angola, Louisiana, prison.

Woodfox chuckled when he learned that the article reporting on his meetings in New York presenting his new book was banned, and the reason given. “I’ve never preached violence,” he said by phone April 23. “The violence always came from the prison administration and guards trying to stop us from organizing and exposing what was going on.”

On issue 17 which articles upset prison officials is unclear. The front page has articles on protests in Sudan, on protests for amnesty for immigrants in the U.S., a strike by Stop & Shop workers in New England, a successful fight to overturn a ban on used books in Washington state prisons and gains won in the fight against racism by the Cuban Revolution.

One prisoner wrote us to say he is filing an appeal to get the ban overturned. “The prison system fears what the Militant is exposing about the government as well as the prison system in America,” he wrote.

Last year, Florida authorities banned seven issues in just one 10-week stretch. After the Militant won support for its fight against the bans from the National Coalition Against Censorship, the American Civil Liberties Union of Florida, PEN America, Amnesty International and other organizations, prison authorities backed down. Almost all the bans were overturned. 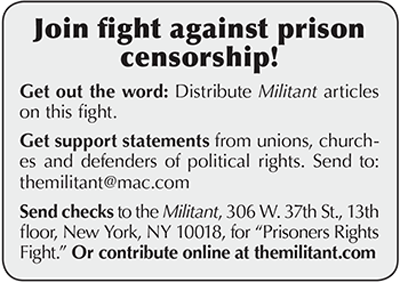 But at least one prisoner in Florida informed the Militant that he has not received a single issue of the paper for months.

The Militant’s lawyer, David Goldstein, has filed a notice of appeal.

The Militant is calling on its supporters everywhere to get union activists and officials, coworkers, church groups, civil liberties organizations, student clubs and others to send letters opposing this latest round of unconstitutional censorship.

“The more they censor and block the Militant,” Militant editor John Studer said April 30, “the more respect we earn from those who are incarcerated.

“Prisoners deserve respect and dignity. We see prisoners as fellow workers who have the right to read material of their choosing and to form their own opinions, to be part of politics and the world,” Studer said. “And they know that we won’t back down defending both their rights and our own.”