One of three Florida prison officials’ bans against the Militant has been overturned. The statewide Literature Review Committee reversed the ban of the Militant’s March 25 issue and says it will deliver it to the paper’s 53 subscribers in 25 Florida prisons. But the committee upheld the unconstitutional ban on two other issues — even before the Militant had been given the opportunity to appeal.

The Militant is filing appeals to both bans.

The March 25 issue had been impounded because Florida officials objected to the front-page article, “Protests Continue in Fight Against Police Killing of Stephon Clark.” That article reported about the Sacramento District Attorney’s decision not to charge the cop who shot Clark eight times, all but one from the back.

For all three issues, prison officials claimed that articles in the paper could encourage “physical violence or group disruption” or otherwise present a “threat to the security, good order, or discipline” of the correctional system.

The Militant is asking supporters of free speech, freedom of the press and the political rights of inmates to send letters to the Literature Review Committee urging them to overturn all the impoundments.

The April 15 issue was censored because of a feature article on Albert Woodfox, who spent nearly 44 years in solitary confinement on frame-up charges in the notorious Angola, Louisiana, penitentiary. Woodfox is on a speaking tour, introducing his new book Solitary: Unbroken by Four Decades in Solitary Confinement and campaigning against prison abuse.

Several prisoners wrote the Militant to make sure the paper knew about the bans. “They think it’s OK to beat and mistreat us,” one prisoner wrote, “but it’s not OK for us to read about it.”

The Militant May 7 filed its appeal against the ban on the April 15 issue and is preparing its challenge to the censorship of the April 29 issue.

Benjamin Stevenson from the American Civil Liberties Union in Florida sent a letter May 6 calling on Florida officials to overturn the ban.

In his appeal of the ban of the April 15 issue, the Militant’s attorney, David Goldstein, notes that Woodfox and his new book have received wide coverage in “prominent mainstream media,” including the New York Times, Washington Post, Chicago Tribune, National Geographic Television and Time magazine. 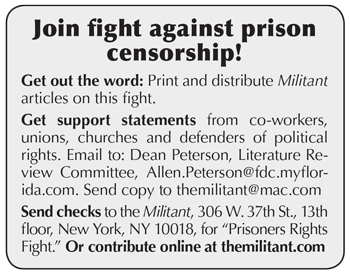 The ban on the paper “violates the First Amendment,” Goldstein said, adding that the Department of Corrections cannot “ban the Militant because some officials disagree with the viewpoints expressed in these articles.” He adds that “nothing in the article so much as hints at any current prisoner taking any action whatsoever that could rationally be deemed as violent or presenting a threat to prison security, good order, discipline, or the safety of any person in any manner.”

It’s not clear what article in the April 29 paper perturbed prison officials. The reason given for the impoundment only refers to “Pages 1, 5,” not any specific article, saying the pages “Displicts[sic] protest continue in fight,” and on page 9, “racism.”

The front page includes articles on protests in Sudan, the debate over abortion rights in Texas, a strike by 31,000 workers at Stop & Shop in New England, the Cuban Revolution and the fight against racism, the demand for amnesty for immigrants and an article on a successful fight against a Washington state ban on prisoners getting used books.

The Militant has been getting to readers behind bars for decades and currently has 131 readers in 69 prisons in 22 states. The number is growing, as 22 prisoners have subscribed during the paper’s efforts to boost its readership this spring.

The Militant offers lower-price or complimentary subscriptions to those in prison who request them.

“We are fighting not just for the rights of the Militant,” the socialist newsweekly’s editor John Studer said May 7. “But for the rights of all those in prison to read material of their choosing, to broaden their horizons, to think for themselves, to be part of the discussions and activities of the working class worldwide.

“We need the help of our readers and all those who stand against the attempts by prison authorities to break the spirit of our brothers and sisters behind bars,” Studer said.

Prisons in the United States are a brutal microcosm of capitalist society as a whole — with its ruthless exploitation of our labor, restrictions on our rights and armed cops and solitary confinement. These are all intended to undermine the…

MIAMI — In a blow to the rights of working people, the Florida legislature adopted a bill May 3 that would undermine the victory won last November when over 64% voted to grant most ex-felons the right to vote. Amendment…