“U.S. troops wouldn’t help people in Venezuela,” temp worker Patricia Flores told socialist campaigner Dean Hazlewood when he showed her the call to action in the Militant — “US Hands Off Venezuela! US Hands Off Cuba!” They met when he knocked on Flores’ door in Blue Island, Illinois, May 4.

“The U.S. military is an imperialist army that goes into other countries to pave the way for U.S. bosses to exploit and oppress, not for freedom and democracy as the government claims,” Hazlewood said, agreeing with Flores. “Working people here have nothing to gain from Washington’s wars in Afghanistan and Syria, nor its threats against Venezuela and Cuba.”

“And look at the way veterans are treated when they return from service,” Flores said. Hazlewood invited her to join a picket line May 6 at the Federal Building in downtown Chicago to protest the U.S. rulers’ war threats.

“I’ll try to make it,” she said, signing up for a subscription to the paper.

Socialist Workers Party candidates across the country explain why the crisis and cutthroat competition built into the workings of the capitalist system will inevitably mean more wars until working people can unite to overturn the dictatorship of capital that confronts us and take power into our own hands.

The SWP, alongside sister Communist Leagues in Canada, Australia, New Zealand and the U.K., is on a seven-week drive to expand the readership of the Militant and revolutionary books and win contributions to the $115,000 Militant Fighting Fund. The drive is aimed at meeting people who get attracted to the party’s program and ongoing political work together.

“Our party opposed the U.S. rulers’ entry into the Second World War,” Socialist Workers Party member Róger Calero said when he spoke with a World War II veteran named Ed at his home in Mineola, New York, April 28. The party explains that the slaughter was above all a fight between the dominant imperialist powers for the redivision of the colonial world and its plunder. The rulers used working-class youth as cannon fodder to defend their interests, Calero said.

Ed, a veteran of the Normandy invasion and the Pacific war, said he had written a small book about his experiences as a worker and a sailor on a U.S. Navy ship and gave a copy of it to Calero, who said he would read it and call him back for further discussion.

“In his book, Ed describes how he and other sailors who supported the rights of Blacks in the U.S. got into ongoing debate about the outcome of the Civil War with others who defended the position of the slave owners,” Calero told the Militant. “Once deployed they put this aside to work to ensure their common survival in combat.”

A few days later, Ed mailed in $5 for a subscription to the Militant.

The call to action in last week’s issue urging pickets and other events to oppose Washington’s attacks on the sovereignty of Venezuela and Cuba has been well received and a number of protests have been organized. You can help fund the Militant — a voice of uncompromising opposition to Washington’s wars — by making a contribution online at www.themilitant.com. The Militant’s only source of funds is its working-class readership.

Donkinna Hightower, a skycap at the Atlanta airport, told socialist campaigner Janice Lynn that in the 16 years he had worked at the airport for different companies his wages and benefits had steadily declined. Lynn spoke to him at his home in a trailer park in Jonesboro, Georgia.

“We need to depend on ourselves and to build a movement independent of the capitalists’ two parties,” Lynn said.

“The politicians of both Democratic and Republican parties are corrupt,” Hightower said. Socialist campaigners hear comments like this often as they campaign in cities, towns and rural areas. Millions are convinced that the U.S. government is immoral and the bosses’ twin parties are self-serving. A road forward to end the source of these problems — the rule of the capitalist class and the crisis for workers their system of exploitation breeds — is what they can find in the books by revolutionary leaders and the Militant that SWP members have to offer.

“I’d like to find out more about your party,” Hightower told Lynn as he subscribed to the Militant.

The SWP urges others to join the party’s campaigns and to fight for the steps along that course that are possible today. To join the party campaigning, or to get books or a subscription, contact the party branch near you. 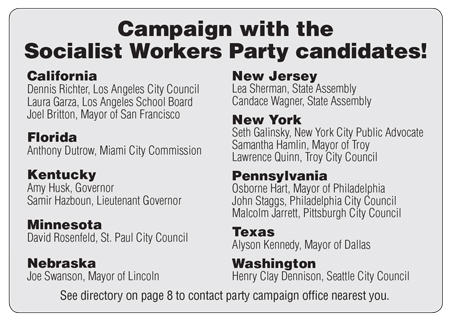