BREAKING NEWS — The Militant has scored a victory in the fight against prison censorship with the announcement by the Kansas Department of Corrections that it has lifted all its bans on the Militant. The Militant had informed Kansas officials that it planned to appeal the bans, after learning it was on a list with 7,000 other banned books and periodicals.

“The victory in Kansas strengthens our fight against censorship in Florida, the only other state where the Militant is repeatedly banned from prisons,” Militant editor John Studer said.

The Militant is challenging the blanket ban on the socialist newsweekly imposed in Kansas state prisons. The Militant learned last month it is one of more than 7,000 books and publications banned by state prison officials there.

Militant attorney David Goldstein wrote Department of Corrections officials July 2 that the paper is appealing all issues that have been banned.

Fighting the unconstitutional ban on books and periodicals in Kansas will strengthen the fight against prison censorship around the country, including in Florida where the Militant is appealing bans on at least five issues of the socialist newsweekly.

Newsweek magazine ran an article, dated May 31, on the breadth of the prison censors’ efforts to restrict inmates right to read. And they appended the whole list, which is where the Militant saw it was on the list.

The Militant wrote to a prison subscriber in Kansas to inquire about the ban, and received forms from Department of Corrections Publication Review Officer Jamie Segreto claiming, “The content of this newspaper poses a threat to the safety and security of correctional facilities.”

The Topeka Capital-Journal editorialized June 23 that “many books about the prison system are banned,” including Prison Grievances: When to Write, How to Write and Are Prisons Obsolete? by Angela Davis. Famous novels like One Flew Over the Cuckoo’s Nest are also banned.

The Capital-Journal said it found the banning of some of the titles “simply head-scratching.” Among those the paper listed are Bloomberg’s Businessweek, and Bon Appétit magazines.

Kansas also apparently bans any books with maps — even imaginary ones — “because, you know, somehow it could lead to a prisoner escaping to Westeros [an imaginary country in Game of Thrones],” Michelle Dillon, who works with Books to Prisoners and the Human Rights Defense Center, told Newsweek.

Over the last 15 years the censorship of 1,622 books and periodicals have been appealed, but only 141 were overturned.

In the face of the public outcry, then Kansas Department of Corrections Secretary Roger Werholtz said, “A quick perusal of the list does raise questions about the overzealousness” of the censors. 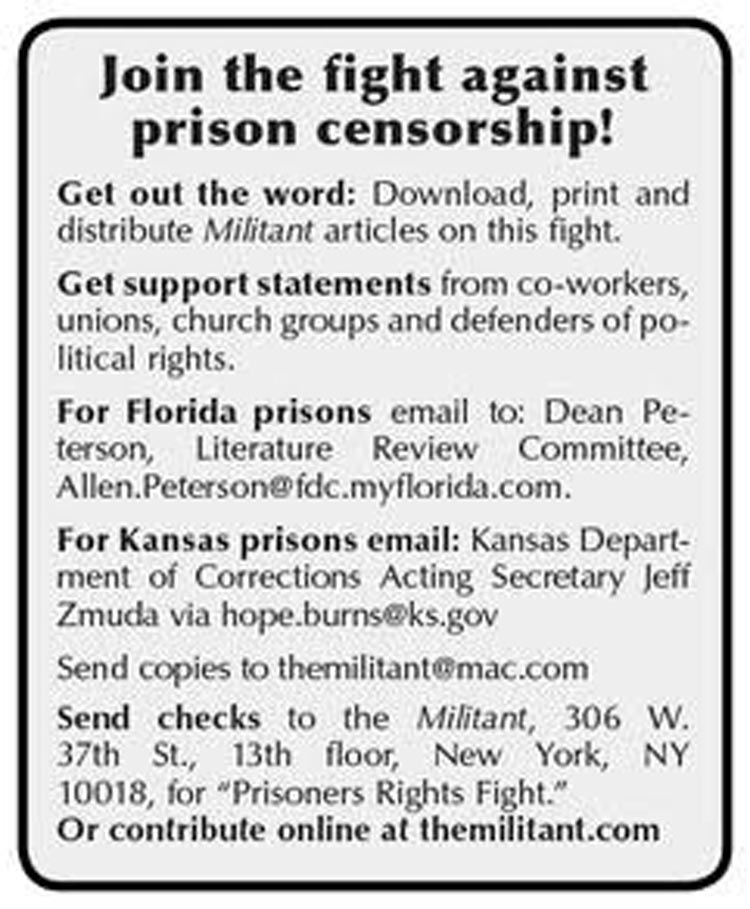 “But it’s not a question of ‘overzealousness,’” Militant editor John Studer said July 10. “It’s a question of the Bill of Rights, the right to freedom of the press, the right of workers behind bars to read material of their choosing, to think for themselves, to be part of the world. The Kansas Department of Corrections should abolish their list of banned publications and stop interfering with the rights of inmates.

“Some bans are just arbitrary, a way for prison officials to try to demoralize and beat down prisoners,” Studer noted. “Other bans are aimed at denying prisoners material that can help them protect their own rights.”

Meanwhile, the Militant is campaigning to convince the Florida prison systems’ Literature Review Committee to lift the ban there on five issues of the Militant. Those issues were banned either for covering a speaking tour by Albert Woodfox, who spent more than 40 years in solitary confinement in the notorious Angola state penitentiary in Louisiana, or for reporting on the fight to overturn their censorship of the Militant.

The Militant is fighting for the right of workers behind bars to read the Militant and other books and publications they choose in two of the 21 states where we have prison subscribers — Florida and Kansas. We’re asking our…