UNION CITY, N.J. — “The 2020 presidential election campaign has been launched by the Republicans and Democrats. Over the next 16 months the Socialist Workers Party candidates and their supporters will present the need to break with the capitalist two-party system, in discussions with workers on their doorsteps in cities, towns, and rural areas and at labor and social protests,” John Studer, SWP national campaign director, told 28 people attending the inaugural Militant Labor Forum at the new forum hall and campaign headquarters in Union City, northern New Jersey, July 6.

The party is running a national slate of candidates throughout the country advancing a fighting program for working people to confront the economic, social, and moral crisis capitalism has created. The New Jersey forum featured three of these candidates — Lea Sherman and Candace Wagner, the party’s candidates for New Jersey General Assembly and Seth Galinsky, its candidate for New York City public advocate.

There is widespread interest in finding a road forward among working people, Studer said, a break from the crisis-ridden capitalist system, with its wars, economic crises and the carnage it inflicts on our class. In this context, he said, the party is organizing Alyson Kennedy, the SWP candidate for president in 2016 and its candidate for Dallas mayor this year, and Malcolm Jarrett, SWP candidate for Pittsburgh City Council, on a series of national trips to campaign across the country. They will campaign in Kentucky July 12-14 and the following weekend in Pittsburgh, helping put Jarrett on the ballot.

“They will join the party candidates Amy Husk and Samir Hazboun for Kentucky governor and lieutenant governor, campaigning in coal-mining areas in both eastern and western Kentucky,” Studer said, “and bring solidarity to striking workers who drive ready-mix trucks and pour concrete at Irving Materials in Evansville, Indiana.”

Lea Sherman pointed to the U.S. government’s most recent war threats against Iran. “Washington maintains troops and bases all over the world to defend the ruling class’s political and economic interests,” she said.

“The sanctions they impose on Iran, Venezuela, and Cuba weigh heaviest on the working classes,” Sherman added. “The SWP demands ‘U.S. rulers hands off!’ and unconditionally defends the sovereignty of countries under attack from Washington and demands an immediate end to the economic war being waged against workers there.”

Galinsky described how he joined a rally of striking taxi drivers May 8, and said the SWP campaign is a voice for solidarity with drivers looking for ways to fight assaults on their wages. There are 100,000 taxi and app-based drivers in New York City that the bosses have pitted against each other in their drive for profits.

‘Drivers need a single union for all’

“Drivers need a single union for all, whether yellow cab, black car, Uber, Lyft, or other e-hail drivers,” he said. “In the course of coming together to fight we can transform ourselves, and change society from top to bottom.”

Wagner, a rail worker, described discussions among her co-workers about the contenders for the Democratic Party’s presidential nomination. “Several Democratic candidates back the Green New Deal, which is modeled on President Franklin Roosevelt’s New Deal — put in place to convince working people that the capitalist government held the solution to the crisis workers faced during the Depression in the years leading up to and through the second imperialist world war,” she said.

The SWP campaign points in the opposite direction — to workers’ capacities to unite and struggle together against the bosses and the parties that serve them to change the conditions they face. A working-class road forward, she said, points to the need to overturn capitalism and replace it with a workers and farmers government.

Erika Remegio from the immigrant rights group Cosecha, which has been leading the fight in New Jersey to win access to driver’s licenses for undocumented workers, also addressed the meeting, describing the fight that group is waging. “We want respect, we came here to work,” Remegio said.

Some immigrants, she noted, “have lost family members because they were afraid to go to the hospital or lacked transportation to get help.” Drivers without licenses face steep fines, jail and even deportation. She invited those at the meeting to come to Cosecha Family Day in Matawan, New Jersey, July 14.

Sherman described her participation in several of Cosecha’s actions for driver’s licenses, and how the Socialist Workers Party calls for the unions to fight for amnesty for all workers in the U.S. without papers. “This is the road to overcome divisions imposed by the ruling class and to build the labor movement and unions,” she said. “The capitalists rake in massive profits by keeping us divided.”

Participants at the forum kicked in over $1,000 towards the refurbishment of the new hall and the expansion of the stock of revolutionary books SWP campaigners will use to introduce the party’s program. 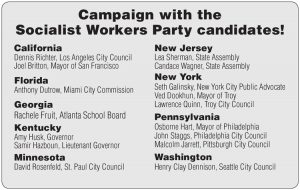 The televised debates unfolding between the two dozen Democrats jostling to become the party’s presidential candidate take place amid a yearslong political crisis unfolding among the parties of the U.S. capitalist ruling families. They fear that sooner or later their…