The Florida Press Association has joined the fight to halt the censorship of the Militant  by Florida prison officials, who have impounded 10 issues of the paper since April. The association represents most newspapers in the state.

Supporters of prisoners rights and of the rights of the Militant  can use this new support — along with previous letters from Amnesty International USA, the National Coalition Against Censorship, the National Lawyers Guild, the American Civil Liberties Union – Florida, WeCount! in Miami-Dade County, and the Riverside Church Prison Ministry — to step up the campaign to overturn the bans on the paper.

The first ban upheld this year by the Literature Review Committee was of issue no. 15, impounded for an article on the speaking tour of Albert Woodfox, who spent more than 40 years in solitary confinement at the state penitentiary in Angola, Louisiana. His story has been reported on in dozens of newspapers around the country. Since then the review committee has upheld almost every ban. Four impounded issues are still to be reviewed.

Prison officials claim that the banned issues encourage activities that “could lead to physical violence or group disruption” or at minimum present “a threat to the security, good order, or discipline of the correctional system.” But prison officials have never pointed to a single sentence to justify their allegations nor explained why they ban some issues, but not others with similar news.

Florida officials have now impounded seven issues in a row — numbers 21, 22, 23, 24, 25, 26 and 27 — for reporting on the socialist newsweekly’s ongoing fight against censorship.

The Militant  has subscribers behind bars in 74 state and federal prisons in 21 states, but it is only being systematically censored in Florida.

More letters are starting to arrive at the offices of the Literature Review Committee calling on it to reverse all the bans. Three current or retired school workers in North Carolina sent a letter Aug. 6.

“As public-school educators, we believe that the publication should be made available to all inmates who want it, to respect their First Amendment rights,” they wrote. “It is wrong to deny prisoners their freedom to read literature of their choice.” 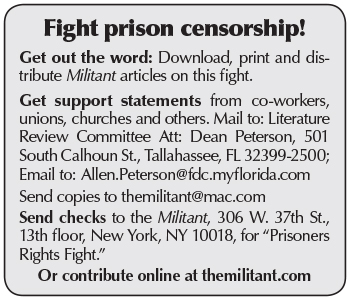 Some Militant  subscribers behind bars have filed grievances through the Department of Correction’s established procedures, calling for overturning the bans.

“There is nothing that I read or watch on TV that causes me to act in protest,” one prisoner said in his appeal. What causes protests, he said, “is the ongoing abuse of authority by prison staff.” The only reason that officials are banning the Militant  is because “someone disagrees with the viewpoints expressed in the articles.”

“Prisoners are working people like you and me,” said Militant  editor John Studer. “They want to know what is happening in the world, to read a wide range of views, to debate and discuss, to form their own opinions.”

Millions of working people have friends or relatives behind bars or have spent time in prison themselves. They know the conditions that prisoners face and have experienced how the “justice” system works, including how plea bargaining undermines the right to a trial and a jury of your peers.  “That’s why we can win even more support to overturn the bans,” Studer said.