“For millions of working people in this country ‘economic recovery’ is not how they would describe their conditions of life over the past 10 years,” Paul Mailhot, a member of the Socialist Workers Party National Committee, told the opening celebration of the party’s new headquarters in Miami Aug. 30.

Mailhot described the stagnant wages and dangerous working conditions growing numbers face and the rising difficulties young workers have affording their own home. He recounted how Blackjewel coal bosses closed mines in Kentucky, West Virginia, Virginia and Wyoming recently “robbing the pensions and wages of miners through a bankruptcy scam.”

“Direct assaults on workers will increase as economic conditions worsen,” he said. Most importantly, workers are beginning to resist. Miners in Harlan County are fighting to get back pay they are owed and have occupied rail tracks to prevent the owners from moving coal. “The miners are setting an example and all working people should help them to fight,” Mailhot urged.

He noted the hall in Miami is the fourth new one the party has opened in the last month, following Albany, New York; Louisville, Kentucky; and Dallas.

He described the work SWP members do to organize workers to fight against the bosses’ assaults and to extend solidarity with labor struggles. And in the course of such work to increase knowledge about the party’s revolutionary program.

Anthony Dutrow, SWP candidate for Miami City Commission,  welcomed participants to the gathering and pointed with pride to the work of volunteers, who got the hall painted and ready for use in less than a week. Dutrow explained that during most of the 40-plus years the SWP has had a branch in Miami, it has maintained a public headquarters there.

The new hall will be an organizing center from which party members will reach to working people across Florida with Dutrow’s campaign, a venue for the regular Militant Labor Forum series, and a place where working people can find a wide range of revolutionary books.

It is centrally located near downtown Miami.  In response to an appeal for funds to furnish the hall and maintain it in the coming months, participants donated $1,290 on the spot. A total of $2,340 has been pledged overall. 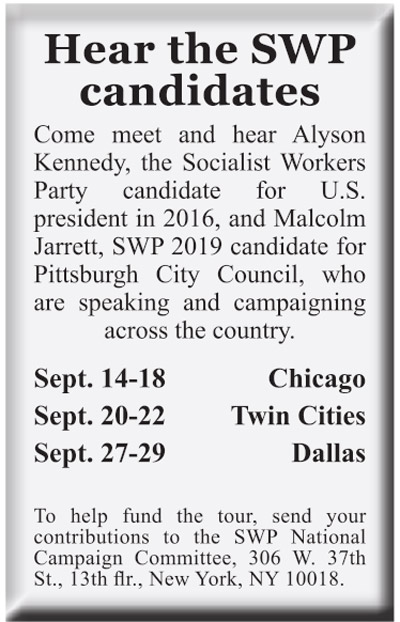 Campaigning door to door in Burien, Washington, they met Markus Nalumu, originally from Fiji. They described the fights by coal miners in Kentucky, and working people in Puerto Rico against the impact of U.S. colonial rule of this island. “It is actions like these that begin to give confidence to working people that they can defend their interests,” Kennedy told Nalumu, who bought a subscription to the Militant.

The SWP candidate for Atlanta School Board, Rachele Fruit, and campaign supporter John Benson traveled to Mississippi Aug. 29-30 to talk with working people in some of the towns where Immigration and Customs Enforcement conducted raids at six poultry processing plants and detained 680 workers Aug. 7.

“They shouldn’t have done it. I didn’t see that these people did anything wrong,” Lucretia Jackson, told the socialist campaigners. Jackson lives in Canton a few blocks from Peco Foods, one of the plants that was raided. “They are good workers, polite, their kids were born here,” she added.

Fruit explained that fighting for an amnesty for the 11 million plus undocumented workers in the U.S. is central to building the unity the workers movement needs to fight for better working and living conditions for all workers, native- and foreign-born. Jackson got a subscription to the Militant  and a copy of the Pathfinder book, “It’s the Poor Who Face the Savagery of the US ‘Justice’ System.”

“No one tells us anything,” Junction City resident Haley Donner told Trowe and Evans. “No one warned us about any danger. Nobody around here knew the gas pipeline was under us,” added her husband, Bill Donner.

Flames from the fire reached 300 feet high and could be seen throughout the county. The pipeline, owned by Enbridge based in Calgary, Alberta, goes from the Gulf of Mexico to New York City. Following the explosion, a company official told the press the pipeline was “probably” inspected in the last four years.

“Now we find out these pipelines have been around for decades and haven’t been maintained,” Gypsy Lane, a relative of the Donners, told Evans and Trowe.

“The capitalists only care about profits. They don’t do basic maintenance to prevent explosions and spills that harm workers and despoil the land, air and water,” Trowe replied.

“And the government that represents the interests of billionaires has contempt for our health and safety,” she said. “It’s the opposite in revolutionary Cuba, where workers and farmers took power in 1959.” The government there acts to prevent natural catastrophes becoming social disasters.

“When hurricanes hit Cuba,” Trowe explained, “working people and their government mobilize those in the path of the storm to get out of harms way and begin recovery work immediately after the hurricane passes.”

Cindy Jaquith in Miami contributed to this article.