As the campaign against suppression of the Militant  by Florida prison wardens gathers momentum, the Department of Corrections Literature Review Committee  overturned the latest impoundments of two more issues of the socialist newsweekly Aug. 28. And they did so before the paper had even filed an appeal.

“Both issues will be allowed into Florida correctional institutions,” committee chair Dean Peterson informed the Militant.

Coming after state prison officials lifted the ban on five previous issues of the paper Aug. 19, this is an important victory for the rights of workers behind bars and of the paper. It will give encouragement to the ongoing fight against efforts to keep the Militant  out of the hands of its subscribers behind bars.

The paper continues to receive messages of support, including from two prisoners incarcerated in Florida who wrote to thank the paper for its fight, along with requests that their subscriptions be extended. 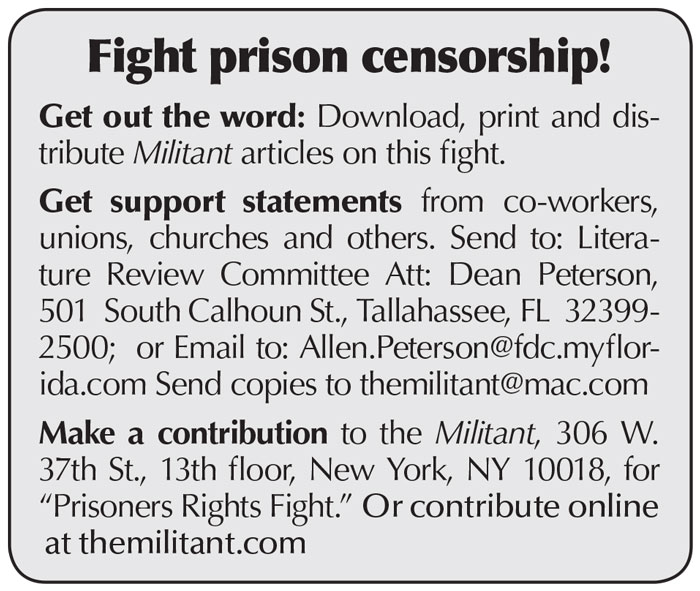 One thanked the paper’s staff for the “support and sacrifice that you all make to ensure that I always receive the paper. God bless you.” Another wrote in Spanish, “a million thanks for the help for the freedom of literature and the press and for the articles on our suffering Cuba.”

Pat Scott and 33 of her Walmart coworkers in Federal Way, Washington, in their letter to the review committee, pointed to the U.S. Constitution’s protection giving “people the right to read whatever they choose.”

In a joint letter, 14 workers at the Capital Plaza Walmart in Maryland requested “that prison officials in Florida end their practice of impounding the Militant  newspaper.” Four retail workers in Montreal wrote letters to protest Florida officials “preventing prisoners from reading the publications of their choice.”

William G. Warrick, a retired construction worker and member of the Teamsters union, wrote to protest the “unjust confiscations of the Militant.” He said, “Working people have the right to consider a wide range of views, whether or not they are behind bars.” He sent a $100 donation to help the paper’s fight.

On behalf of the Chicago Torture Justice Centre, former prisoner Mark A. Clements, a victim of cop torture and frame-up, wrote “to voice opposition” to the “repeated attacks upon the Militant  publication.” He noted that the paper “has existed for decades” and provides “reading material that teaches history and provides a different perspective, however it does not promote violence or disrespect.”

The Militant  tries to “expose systematic injustice,” Clements said. “Individuals that are incarcerated must be afforded with opportunity to know what is affecting them while behind the wall.”

Bill Montross, a reader of the paper in Maryland for many years, wrote to protest the “quite arbitrary and capricious” actions of Florida prison institutions “to bar the Militant  newspaper from those inmates who have chosen to subscribe to it.”

“Impounding the Militant”  wrote Rogelio Rigor, a retired Seattle school teacher and member of the Ethnic Studies Task Force Committee there, “runs against the democratic right and freedom of the press.” And, he said, it is based on “false claims against” the paper.

“Working people — in or out of prison — need to prepare to rule society for the benefit of all Humanity and in transition to a society that no longer needs rulers (or prisons),” wrote Erek Slater, a bus driver from Chicago and a shop steward and executive board member of Amalgamated Transit Union Local 241. “That means having access to current information and culture from around the world.”

“This latest victory reversing the ban on two more issues of the Militant  will be a boost,” said Militant  editor John Studer. “It will inspire supporters of the rights of workers behind bars and of freedom of the press to keep up their pressure on Florida prison officials.

“Dean Peterson has admitted that these ‘impoundments are made at the institutional level.’ That is, they are a sign of political prejudice against the Militant  by prison authorities,” Studer said. “Public attention is crucial in this battle for workers behind bars to have unfettered access to literature of their choosing.

“Keep up the pressure!”